As San Luis Obispo's downtown continues a morph into malldom, a local business girds for change 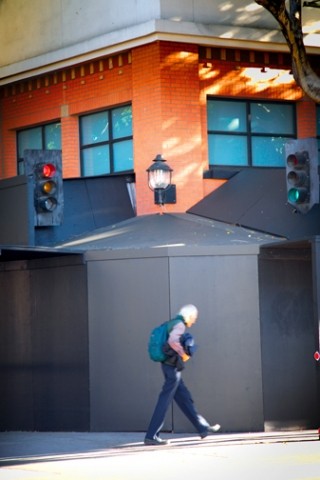 # "I thought 'Oh boy,'" Williams said in an interview from a cluttered storeroom in the Mac Superstore he owns, just on the other end of Higuera. "Here we go."

He was concerned that the pairing of a deep-pocketed developer credited with revitalizing San Luis Obispo's downtown with city officials hungry for the cachet and increased revenue that would come from a hugely successful retailer would bode ill for the defense of the all-things-Apple store he created nine years ago.

Though Clark said Copeland received no special favors she cringingly recalled the scene Williams mentioned and said she understood how it must have looked, but felt it would have been rude to change seats Williams' worries ultimately proved well-founded.

Last summer the city's Cultural Heritage Committee suggested big changes in Apple's initial designs as it passed them on to the Architectural Review Commission.

Soon after, the plans fell idle. Apple has earned a reputation as a corporation that likes to control all details of its image and stores. Company representatives eventually asked for an "indefinite delay" in the process. Public interest, strong at first, dissipated. Williams believed the deal was dead.

In November, however, Copeland Properties resubmitted more generic plans for the site with Apple's name no longer attached. After the Architectural Review Commission still demanded changes insisting that six windows along Morro Street be clear instead of frosted to prevent that corridor from feeling like a lifeless alleyway Copeland appealed to the City Council and in January got his frosted-windows version approved on a 3-2 vote.

With Apple no longer listed as the tenant, no members of the public spoke against the move.

Less than a week later, however, Apple was seeking employees for the store in postings on Craigslist. Apple quickly signed a lease, and an expanse of black plywood now shields the site at 899 Higuera from public view as workers endeavor to transform the former Express Men store into a look-at-me attraction or distraction on San Luis Obispo's signature downtown corridor.

"They definitely worked the system," Williams said. "It's sad to me the Copelands were so bent on getting Apple here."

Neither Copeland Properties nor Copeland architect Mark Rawson returned repeated calls for response. Apple spokeswoman Amy Barney answered all questions about the store with the response: "Apple has made no announcements concerning a store at that location."

Clark noted that once Apple's name was taken off the plans, she was no longer involved in the process.

San Luis Obispo Mayor Dave Romero, who voted to allow the changes, said he suspected even at the time that Apple was still the intended tenant. Still, he defended Copeland's gambit.

"It's a fair strategy if someone feels that using a tenant's name is a plus or a minus they can play it any way they want," Romero said.

Williams acknowledged that he wasn't following the issue out of a pure love of good architecture he's a businessman who was trying to stop or stall a competitor. Yet the process with Apple's name being taken off the application just long enough for it to get approved left a sour taste with others as well.

"Copeland didn't do anything that was against the rules or illegal, but I would say it was a little clever. It was very clever," said Allen Root, a local metal sculptor, business owner, and member of the Architectural Review Commission.

Root said Copeland Properties representatives in November described their plans to the commission as merely a way to make the empty space more marketable. Members may have wondered if Apple was still the intended tenant, he said, but it was presented as if they were not.

Root said he was frustrated but not surprised that the City Council upheld the appeal. Although the architectural recommendations are based on very specific guidelines, appeals are often granted.

"They never side with the ARC," he said. "It kind of makes me wonder, 'Why am I not at home watching TV?'"

More importantly, one might wonder, why would it matter if a half-dozen windows on one San Luis Obispo street were frosted or clear glass?

Root said the issue matters for this reason: Most national retailers the sort who are increasingly taking over downtown retail space design their stores to be placed in malls, not downtowns. Mall locations don't have windows on the side, but San Luis Obispo does. If you don't have a design that incorporates the windows, and in a way that they look like real windows, "then, guess what your downtown starts looking like?" Root asked. "A mall."

"It seems to me," Root said, "the elected officials and the administration are afraid to ask anything of the national retailers for fear that they'll go somewhere else, and I don't think that fear is well-founded."

Romero said he's sorry Root got frustrated but said he's philosophically inclined to give property owners leeway in how they use their buildings.

For Williams, Apple Store's coming has him scrambling to revamp his business model in preparation for direct competition from his long-time partner. He expects business to drop by half or more and is preparing for the competition to ultimately cost him as much as $3 million in annual sales.

It's a difficult lesson for someone who first started selling Apple products when the company was in the dumps.

While Williams has real dollars at stake, the objections he and others raised to the city weren't just sour apples.

Apple's other retail outlets are designed as equal parts storefront and statement. They have achieved a signature look with ultra-modern expanses of low-iron glass, bead-blasted stainless steel, and an ever-present glowing white Apple icon.

Apple's San Francisco store is a massive steel and glass box with a huge skylight. If it has a somewhat sterile quality, it also feels like a clutter-free invitation to the future, and somehow manages to bathe everything and everybody in a flattering light. Love them or not, the stores aren't something to be ignored.

That's why Williams and others question how the process could have proceeded without Apple's identity known.

Truth be told, Williams is only a couple of design steps behind Apple. His Mac Superstore features concrete floors, hand-made steel displays, and frosted acrylic counters at their service center their own answer to Apple Stores' so-called genius bars. He has a separate storefront called the iPod store, but because of Apple objections, it's soon to be more broadly renamed as simply "Play."

Still, it's not all bleak for Williams.

With no set parking, the Apple corporate store will be a difficult place to lug a heavy computer from and particularly difficult to lug it back and forth for repairs. That gives the Mac Superstore owner some hope. He expects to retain loyal business customers and he knows that, since only a fraction of people who visit Apple Stores actually walk out buying anything, many are sure to leave with only a seed planted that they'll buy the shiny Apple gizmo they saw some other time.

When they do, Williams hopes they'll think different, and buy it from him.