James Wan (Saw, Insidious, The Conjuring) directs this latest entry in the DC Extended Universe. The story centers on land dweller Arthur Curry (Jason Momoa), aka Aquaman, the rightful heir to the throne of the underwater kingdom Atlantis. After his Atlantean half-brother, King Orm (Patrick Wilson), declares war on the surface, Arthur must claim his birthright in order to stop genocide. With help from allies Mera (Amber Heard) and Vulko (Willem Dafoe), Arthur travels the world in search of an ancient weapon: a trident that legend says can only be wielded by the one true king of Atlantis. (142 min.) 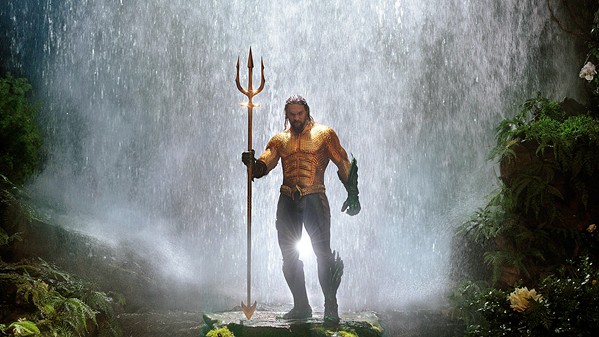 Karen So I'm just going to say it: I haven't seen all of the recent movies in the DC Extended Universe. I refuse to see Batman v Superman: Dawn of Justice and Justice League because not only does the CGI—from what I could see in the trailers—look awful, but Suicide Squad and Man of Steel were terrible. The only film I enjoyed was Wonder Woman. I mean Gal Gadot was just amazing, but it still wasn't that great. I'm happy to say Aquaman completely changed my mind about the current state of the DC franchise. On a cliff's edge in 1985 Maine lives lighthouse keeper Thomas Curry (Temuera Morrison). During a storm, Thomas spots an unconscious woman (Nicole Kidman) washed up on the rocks. Of course he couldn't leave a catch like her out in the rain, so he takes her in. It turns out she's Atlanna, the princess of the underwater kingdom Atlantis, escaping from her arranged marriage. It's very Little Mermaid-esque, as she doesn't know what half the items in his home are but alas the two fall in love and have a son named Arthur (Jason Momoa). But the happily-ever-after story doesn't last as Atlantean soldiers go after the family with an order to take Atlanna back to her husband. Atlanna willingly goes back to the sea to save Thomas and Arthur, promising to return when it's safe. The perk of having a mother from the depths of the sea is that not only is she freakishly strong, she also has the ability to speak to marine animals and whatever else lies 12,200 feet below the ocean surface.

Caleb Unlike certain people who will not be named, I watch everything DC puts out no matter how bad they look (and turn out to be most of the time). Wonder Woman is no longer the only exception now that we have Aquaman, one of the most fun and visually creative comic book adaptations I've seen all year, and that's really saying something because there were a lot of them! Under the belief that his mother was executed for treason after being taken back to Atlantis, Arthur grows up vowing complete isolation from his oceanic roots, refusing to ever get involved with Atlantean politics, for example. Although his bloodline and seniority over his younger half-brother, Orm, secure a claim to the throne, Arthur has never found a reason to take Atlantis for himself. That is until Orm plans on uniting the seven sea kingdoms in order to wage war on the surface world and all who inhabit it. The union would also grant Orm a new, dictatorial title much higher than king—Ocean Master! The name is inherently silly, but I'm glad the film supplied a logical reason for Orm to proceed under his original comic book moniker. Still, the name Ocean Master doesn't roll off the tongue nearly as well as Black Manta, arguably Aquaman's biggest baddie in the comics but portrayed as a ruthless mercenary hired by Orm here. Manta (Yahya Abdul-Mateen II) is clearly the Boba Fett of this film. He isn't the primary threat or on screen for very long, but he still kicks a lot of ass and does so in extremely stylish fashion. I loved seeing him putting the Black Manta suit together; it's a work of art. It's easy to predict what the most popular costume at Comic-Con is going to be next year. OK that's definitely an overstatement, but it would ring true in a perfect world.

Karen Can we dive into how perfect Momoa is as Aquaman? I think the personality he gives the character is pretty spot on. I mean here's a guy who believed his mother was sacrificed by the very people that need his help, so yes, I like sassy Arthur. My only gripe is the hilariously weird slow-motion scenes where Arthur is about to kick ass and take names, paired with classic rock instrumentals. I appreciate how much Momoa's character develops throughout the film, from wanting nothing to do with the people of the sea to his determined motivation to help them. I also appreciate the diversity of the cast: Morrison, Randall Park, Abdul-Mateen ll, and Michael Beach. I will say Wilson's character, Orm, fell kind of flat for me. I get it. You want to rule the ocean, your mom technically had an affair, you have a half brother who wants the throne, and your girlfriend ran off with him—OK stop yelling about literally everything! There was another character that I hope we see again. Unlike Marvel Cinematic Universe films, there's only one teaser at the end of Aquaman before the production credits—I repeat: no need to wait around for post-credit spoilers—and it's left me wanting to learn more about the Dr. Stephen Shin character. He's peppered throughout the film, but we don't really get to hear from him. If you do a little research and if the writers of a future sequel stay true to the comics, we might learn more about his role in the story (Google it, I'm not going to tell you everything). Overall I'll probably see this movie again in theaters, it's just that good! There are so many bright, popping colors across the screen between the view of the city of Atlantis and Sicily, Italy. It has everything you need to kill about two and a half hours: drama, action, cheesy romance, and so much more.

Caleb Those vibrant colors and the overall lighthearted tone of the film make Aquaman such an intriguing 180 for director James Wan, primarily known for his horror films. I always love seeing filmmakers step out of their comfort zones, whether it ends up working or not. The good news is Aquaman does work. There's a lot to geek out about. I'd hate to spend too much time gushing about the special effects and design over the performances and story, but boy oh boy does this movie look freakin' cool! My only real complaint is the scenes on land occasionally pale in comparison to everything happening underwater, and that's purely due to the visuals. The city of Atlantis itself is especially arresting, but it isn't the only oceanic kingdom we get to visit. Wan even gets to show off some of his horror chops when Arthur and Mera journey into the Trench, the most barbaric of the seven sea kingdoms. There are plenty of jump scares when the duo is ambushed by a tribe of amphibious demons. But the most beautifully designed creature in the entire film is Karathen, the mythical sea monster that guards the legendary trident Arthur seeks. If a Godzilla-sized leviathan with a devilish sense of humor voiced by Julie Andrews doesn't get your butt to the theater, nothing will. Δ