Are they human or are they dancer?

Call them the Big Four. Not the Fantastic Four. Not those weird dance-y people. Although at a planning meeting for the PAC’s first collaborative dance festival—Jumpbrush: Pacific Coast Dance Convergence—the choreographers’ stress is palpable. Three of the four are wearing reading glasses, an accessory you rarely spot in a dance studio, and all are staring intently at organizers and datebooks, penciling away every spare second of freedom the first two weeks of August.

Drew Silvaggio pops out of his chair to demonstrate the JumpBrush “handshake”—a hop and swish of the feet. If the Big Four have a clown it’s Civic Ballet’s Artistic Director. Ballet Theatre SLO Artistic Director Theresa Slobodnik is all business, coordinating schedules. Lisa Deyo, founder and artistic director of Deyo Dances, is relaxed and happy from a recent trip to Hawaii, enhancing her naturally friendly personality. And Diana Stanton, co-founder and co-director of contemporary dance troupe Variable Velocity, vacillates between business and the occasional spark of humor.

For the first time, they’ve combined the resources of San Luis Obispo’s major dance studios to host a three-day dance extravaganza. With a little help from the PAC. During his annual meetings with the four dance organizations, PAC Managing Director Ron Regier encouraged them to collaborate on a project.

“I was always asking when are you going to get together and do a dance festival, trying to be a provocateur,” he said at an open rehearsal in late July. “There’s the possibility that the PAC itself … can create new works for the community.”

The festival, which runs Aug. 12 to 14 and features workshops, classes, performances from each of the four participating dance studios, a structured improv performance, and a show by San Francisco-based ODC Dance, will run on alternate years to the PAC’s California International Choral Festival, which debuted in 2009.

Simply naming the festival was an exercise in collaboration and patience. Deyo spends an entire three minutes rattling off the list of discarded names—“Nexus,” “The Stew,” “Are we human or are we dancer,” “California Dance Festival,” “Find Your Center,” and “Sequence,” among them. “And these are just the ones we kept,” she adds. As the overlords of their respective organizations, The Big Four, for the most part, aren’t accustomed to deferring to another opinion. Making decisions collaboratively has been a bittersweet challenge. And though they’ve been sharing the same pool of dancers, and community, they’ve had few opportunities to interact, much less collaborate.

“It takes so much energy just to produce our own work that we never even get an opportunity to takes classes from each other,” said Deyo.

“And we all have jobs,” added Stanton.

The venue poses some striking advantages, among them a 2,767-pipe organ that has been paired with film but never with Terpsichore’s own medium of movement. The final performance on the evening of Aug. 14 is called “Convergence,” and, as the name suggests, the improvisation draws on dancers from all four studios, the Big Four, representatives of ODC Dance, and Paul Woodring, resident pipe organist at the PAC. A large screen located at the rear of the stage will project a video of Woodring’s hands dancing across the keys.

Deyo calls the project “an organized arena for physical conversation.”

Each choreographer has a movement signature—also called a “nugget,” to borrow a phrase from Stanton’s dance vocabulary—that they perform and teach to the other dancers onstage. The choreographers aren’t certain what will happen; despite organizing a framework for “Convergence,” there are still plenty of opportunities for spontaneous movements, and even crashes. “Chaotic forest run,” announces Slobodnik at one point during a rehearsal, to which Silvaggio responds, “I can do that.” An improvisation is always something of a risk to the dancers, but it has its pay-offs for the audience.

“That moment, that dance, that night, it only happens once,” said Stanton.

Besides sharing dancers and stage time, the Big Four are looking forward to sharing another valuable resource as well: an audience.

“Each group has their die-hard fans,” said Deyo. “For people who like dance, this is a one-shot deal. They get to see a smorgasbord.” It’s an opportunity to fall in love with another studio, or even expand your perception of what’s available on the Central Coast. Of course, each company has its own 15-minute time slot to convey what they are about, tell a story, or elicit a particular emotion. 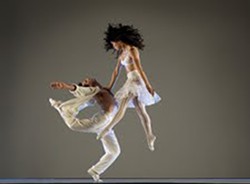 This opportunity expands well beyond the Saturday evening performances as well. Workshops are open to the public for a discounted fee.

“Observers can come,” explained Tanya Tolmasoff, a local dancer and Jumpbrush coordinator. “People who always wanted to know what dancers go through to be beautiful onstage. That usually is kept separate from the public.”

But before they can be beautiful, the Big Four have to fill their date books with ink, the tech crew at the PAC has endless hours of prepping, and Silvaggio has a couple dozen jokes to unload in an otherwise tense room.