Are you drinking the stars?

Check out a sparkling new wine bar in Avila Beach 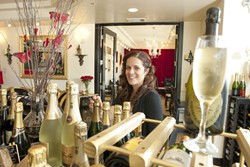 He did not, according to historian Serena Sutcliffe in her book, Champagne—the History and Character of the World’s Most Celebrated Wine. She wrote: “But he was the first to take full advantage of the natural effervescence of the local wine—he brought ‘champagne mousseux’ to glory.” He improved the quality the vineyards and was the first to use corks in Champagne bottles. He’s typically wrongly quoted as saying: “Come quickly, I am drinking the stars,” upon his first taste of Champagne. Yet that quote does seem appropriate in the new Avila Beach “Champagne and Delights Bar,” owned by entrepreneur Starr Hall.

Cuvée Champagne Bar, only open one month as of this printing, is a terrific new addition to Avila Beach. Like a cozy little bistro in French wine country, Hall’s ideal business is filled with beautiful antiques: the settee and Queen Victoria chairs, circa late 1800s, in the lounge area; mirrors and statuettes; and Champagne riddling racks from the prestigious Schramsberg Vineyards in Napa Valley, which were used to build the attractive bar.

“Everything I bought is either vintage or recycled, and I had to beg to get those riddling racks from Schramsberg,” Hall recalled with a smile. “But I’m not the type to leave everything the way it is. I’ll move it all around to reinvent the place. Who knows what I’ll do?”

Hall is an international publicist, a social media strategist, a featured columnist for Entrepreneur Magazine, and author of Get Connected—the Social Networking Toolkit for Business. She’s currently writing a new book, The Social Wave, which will be released this fall. Yet despite her international success, Hall will tell you the opening of Cuvée was a dream come true. Her passion for food and her travels around the world—particularly France, Italy, and Spain—inspired the European ambiance she created at Cuvée. But she admits she had many ideas about what she wanted to create, including a tapas bar in SLO, before she decided on a Champagne bar.

“I have been compiling photos, doing research, and talking about this for over a decade,” Hall explained, noting that the concept changed when she traveled and as she kept refining it. In January, her daughter Savannah Starr (her last name was Hall, but she only uses her first and middle names now) approached her with a stack of dessert cookbooks and explained how they pair with Champagne. Savannah suggested they take on a mother-daughter adventure, adding: “You help other people achieve their dreams every day; it is time to do it for you.”

The following day, Hall was walking her dogs and noticed the rental sign on the building on 1st St. near Avila Bay Drive.

“I looked at the place that afternoon and rented it, fully committed,” she said.

The glossary in Sutcliffe’s Champagne explains the French word, cuvée: “a blend of wines (varietals) which make up a specific champagne. A producer refers to his wine as his ‘cuvée;’ also the first juice from the presses.” I didn’t find any reference to the alleged quote by Dom Perignon; Sutcliffe didn’t bother explaining it. Wine connoisseurs know that a cuvée is a white or red wine blend of different varieties, which include red, white, and sparkling wines. In France’s Rhone region, Crozes-Hermitage, the finest reds are exclusively Syrah, but up to 15 percent of Marsanne, Roussanne, or both varietals can be added to each vintage. Blends in France are enforced by the government organization, the Institute National des Appellations d’Origine (INAO), which is similar to our governing body—but ours isn’t as strict. In the United States, winemakers aren’t subject to rules governing which varietals may be blended.

Cuvée Champagne Bar serves Champagne and sparkling wines from California, Italy, and Spain—which make up 90 percent of sales—by the glass or bottle. But Hall realized it would be wise to offer still wine cuvées (blends mostly from local wineries), too. Although she’s surrounded by Avila Beach hotels that bring in plenty of tourists, local boomers are already discovering Cuvée, and typically buy more wines by the bottle. Hall’s social media expertise comes into play as well: She provides guests with complimentary Wi-Fi, or you can borrow an electronic tablet to log on and post comments about Cuvée on Yelp, Trip Advisor, Twitter, and/or Facebook. Cuvee Champagne Wine Bar’s website can be found at cuveechampagnebar.com. In fact, Hall insists (like she has to) that her staffers post online at least twice a workday about specials they’re offering. Scan her QR code with your smartphone, and it takes you to her fan page on Facebook, which earns you a cupcake mini.

Popular wine menu items include sparkling wine flights ($10), which provide Saint Hilaire Brut, France; Mionetto Il Prosecco, Italy; and Segura Viudas Brut Reserva, Spain. For $5 more, they’ll add Moet & Chandon Brut Imperial Rose Champagne, France. They offer mixers like the classic Champagne cocktail or mimosa, and Champagne shooters with seasonal fruit ($4 to $10). Hall hopes to expand to a restaurant (until then no one younger than 21 is allowed inside), and a concierge service that delivers to residents and tourists countywide.

The hors d’oeuvres menu includes bread with dips ($7), prosciutto melt topped with sun-dried tomatoes and micro-greens ($10), and salumi and cheese platter with fruit and nuts ($15 small/$21 large). On my second visit with a friend, we enjoyed the Mumm Napa Brut Rose ($7 glass), and shared the salumi and cheese plate. It’s a terrific place for meeting family and friends for adult treats, and for trying special little gourmet indulgences like the chocolate-covered fruit, cupcakes, and peanut butter cups. ∆