Alan Elliott and Sydney Pollack co-direct this documentary about soul singer Aretha Franklin with the choir at the New Bethel Baptist Church in Watts, Los Angeles, in January of 1972. (89 min.)

Glen There're a lot of amazing elements to this documentary. The fact that Sydney Pollack (This Property Is Condemned, They Shoot Horses, Don't They?, Jeremiah Johnson, Three Days of the Condor, Tootsie, Out of Africa, The Firm) directed the 1972 filming and is now given co-direction credit 11 years after his death is pretty amazing. The fact that this footage languished for 47 years before seeing the light of day is pretty amazing. I should also mention it's a pretty rough edit, and there're a lot of moments where the camera operators struggle to get into focus. None of that matters because the most amazing element of all is Aretha's voice. She was 29 years old, and she'd had a string of popular R&B hits such as "I Say a Little Prayer," "A Natural Woman," "Respect," Chain of Fools," "Think," "Do Right Woman—Do Right Man," and many more, but she decided to return to her gospel roots in performances filmed over two days. The concerts' live recordings yielded Amazing Grace, the best selling gospel album of all time. Watching her work with Rev. James Cleveland, a great gospel singer in his own right, the incredible music director Alexander Hamilton and the Southern California Community Choir, and members of her own band is mind-blowing. The concerts had an improvised, organic feel to them, similar to the call-and-response gospel sounds of black churches all over America. The difference is Aretha's supple, nuanced, thrilling voice. It doesn't matter if you're religious or not, watching this film will fill you with the spirit. 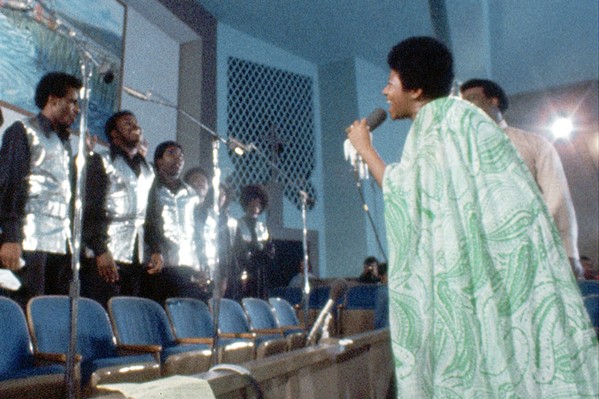 Anna What an incredible event that must have been to experience in real life. It's hard to explain the raw power behind Franklin's voice, and paired with the moving message of gospel, she shines like nothing less than a goddess. Unlike most films that are focused on a story, this one is straight gospel from beginning to end, no interviews or cutaways, just Aretha, the audience, and preachers spreading the word. Toward the end of the film, Aretha's father C.L. Franklin, a Baptist minister himself, gets up to talk about his daughter, and the glowing pride on his face and in his words is palpable. He is one proud papa, and the sheer joy of the congregation is wonderful. It'll bring tears to your eyes—or at least it did for me. I'm not a churchgoer myself, but it was a good reminder of what it can be for some people. It's crazy to think Franklin was only 29 when this was filmed—the woman was clearly a powerhouse from a young age! Her voice along with the choir, the nostalgic 1972 hairstyles and outfits—even with some focusing issues, this film still glitters like gold. I understand if gospel music isn't your thing, but then again this movie may just change your mind. 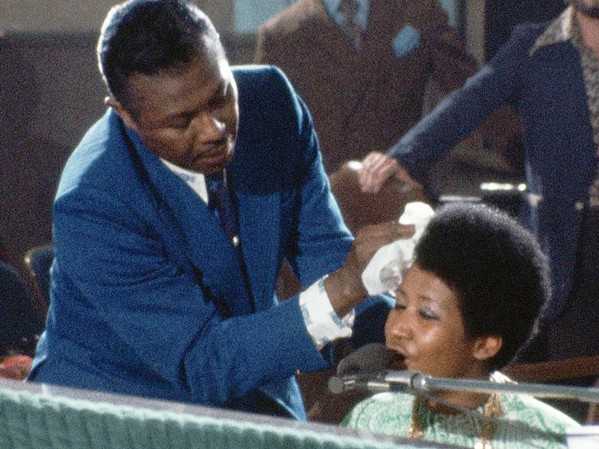 Glen The scenes with her father on the second night were truly moving, but on the first night, when she closes with "Amazing Grace," Rev. Cleveland, who was accompanying her on piano, became so overwhelmed himself that another pianist took over as Cleveland buried his face in his hands and wept, he was so overcome by Aretha's voice and interpretation of the song. Much of the fun is watching the cameras scan over the lucky audience members as well as the choir singers, whose spontaneous reactions to Aretha's performance are honest and raw. The close-ups on Aretha's perspiring face, her eyes closed in solemn prayer, a serene Buddha-like glow of the divine all around her—you know you're witnessing a kind of magic, a kind of mass hysteria, a kind of miracle. It's also fun when the camera catches The Rolling Stones frontman Mick Jagger in the back of the room on the second night. Obviously word got out after the first night, and Jagger had to see for himself. Everyone in that room hung on every note. At one point co-director Alan Elliott, who resurrected the footage, went to split screen, following Aretha's performance on one half of the screen and the quick-stepping dancing of two women who couldn't stay in their seats on the other. Remember the scene in The Blues Brothers (1980) with James Brown as the preacher and Jake and Elwood seeing the light and breaking into dance? That elaborately staged spectacle is Hollywood's version of what Aretha Franklin, Rev. Cleveland, Alexander Hamilton, and the Southern California Community Choir created in real life over those two nights in 1972. We watched the film the day before Easter, and it's all the church I need. Simply amazing!

Anna People can barely contain themselves in the audience, and as you mentioned, occasionally they can't! It's almost like a cure-all—inescapable joy is radiating right out of the roof, and it's tough to feel down after witnessing such united love. I'm so glad that this footage was saved and finally made it to the big screen. It's one thing to hear the music but a whole other feast for the senses when you see it in the theater. It's an experience, and seeing Aretha feels like a treat. I can hardly imagine those in the audience don't bow their heads in thanks every day for the chance to witness her and the music she grew up on. I want the album, I want her outfits, and I want to be a fly on that church wall. I think because this film is almost completely music, it may be easy to get distracted in a home viewing. This is one to surround yourself in the darkness of a theater and really enjoy every minute. Catch it at The Palm while you have the chance! Δ