The San Luis Obispo County Republican Party's Atascadero headquarters was abuzz at 9:30 p.m. on March 3, as a packed room—decked out with American flags, Trump 2020 gear, and a life-sized cardboard cutout of Donald and Melania Trump—readied for an update on the day's election results.

The latest tallies gave them reason to celebrate. 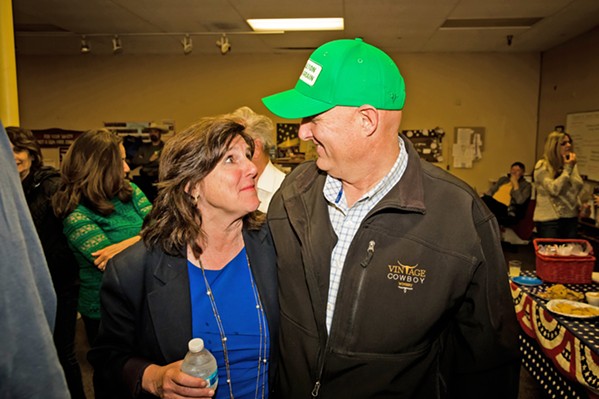 Both frontrunners expressed cautious optimism on March 3, while noting that the final tallies wouldn't likely be known for several days. If the results do hold, they'd secure a continued Republican majority on the SLO County Board of Supervisors, which has been in power since 2017.

But thousands of ballots are still left to count—and a majority of those are expected to lean blue. The volatile nature of the presidential primary meant that many local Democrats waited to submit mail-in ballots at the last minute, according to party leaders. The election night results only counted mail-in ballots that were received before Saturday, Feb. 29, as well as votes cast at the ballot box.

At Beraud's election party in Atascadero, a few blocks away at the Wild Fields Brewhouse, that was the mantra keeping spirits up.

"I know a lot of Democrats were holding onto their ballots. I'm not discouraged. We just have to be patient," Beraud told New Times. "I wish I could go to bed tonight knowing I won, but it's just a process."

Wearing a look of relief, Arnold, who's seeking her third term, told New Times that she put more effort into this campaign than her previous two.

The 5th District race was contentious from the start, and it drew the most money of the three county supervisor contests, at more than $500,000. Beraud campaigned as an inclusive leader who would rid the Board of Supervisors of its rigid conservative agenda. Arnold ran on her work opposing new taxes and addressing North County groundwater and homelessness, while also harnessing a strong base of support, which was highlighted by a committee that formed solely to attack Beraud for her 2007 vote on the Atascadero City Council opposing a veterans' memorial statue.

Beraud told New Times that the attacks over the statue, which she said she opposed due to a lack of consensus on its design, "weren't unexpected," but she lamented that they distracted from the issues facing the county.

"It's just kind of sad to me that she can't run on her record. She has to try to character assassinate me," Beraud said. "It's disappointing she doesn't take any responsibility for it. I don't know how she can distance herself from it."

Arnold, who lives in Pozo, said she knew many of the locals who had raised money for the statue at the time, and she found Beraud's 2007 vote "disappointing." But Arnold claimed no involvement with the political action committee that funded the negative ads.

While campaigning, Arnold and Beraud both said the biggest issue that emerged among voters was the county's lack of low-cost housing. To Arnold, the clamor for housing represents a stunning reversal from the past.

"In this county for so many decades, the popular opinion was kind of a 'no growth' opinion," Arnold said. "In the past, if I had ever stood up as a candidate and said I want to build more houses, [voters] would say, 'Get her out of here!' Now it's just come to a place, after decades of slow growth, it's almost like a role reversal."

Beraud similarly found affordable housing, and all its related issues, from homelessness to the economy, to be most pressing. She doesn't think the current Board of Supervisors is doing enough to address them.