Learn more about terpenes and what they're all about by visiting goldenapplecannabis.com or checking out the cocktails at Sidecar at 1127 Broad St. in SLO, Eleven Twenty-Two on Railroad St. in Paso Robles, or Fish Gaucho at 1244 Park St. in Paso.

A pool of chilled Ford's Gin waits for lips to sip it. But first, we pass it around the table, hovering our noses above the rim of the martini glass and taking giant whiffs of what's inside.

The smell is arresting, intense, clean. Citrus mingled with herbaceous gin—and that's exactly how it tastes. Clean, citrusy, a little herby, not too gin-y. Its aroma and flavor isn't brought to you by a lemon peel or grapefruit juice, but something called terpenes.

Sidecar's The Crooked Beat cocktail has myrcene and limonene terpenes from Golden Apple Cannabis Co. shaken into it, along with vermouth, citric acid, and gin. Surprisingly, Sidecar owner Josh Christensen said, if this cocktail were to include organic matter, like juice or a peel, its flavors would be more muddled than they are.

"It's not a lemon drop, but it's inspired by that," Christensen said. "It's different because the fruit juice carries with it other botanical flavors and the flavors aren't all the compound."

"The compound" was explained to me like this: terpenes are one step more refined than essential oils. The strong flavors and aromas associated with organic things can be distilled down to terpenes. Limonene, for instance, is a terpene found in citrus fruit. Myrcene occurs in fragrant plants such as basil, lemongrass, and hops. And they can be used to manipulate cocktails, foods, lotions, etc.

"It's a tool that a lot of bartenders have never had at their disposal," Christensen said. "You're messing with things at a molecular level. ... It's kind of fun. It creates a situation where we have kind of unlimited possibilities. It's weird."

There are two other drinks on Sidecar's current cocktail menu that include the mysterious terpene. Eastbound and Down contains Rittenhouse Rye Whiskey, vanilla, Angostura Bitters, Golden Apple Cannabis Co.'s beta caryophyllene and myrcene terpenes with a smoked glass. Honestly, I couldn't stop smelling it. The aromas are so intense, almost to the point of kicking that smokey essence to the side. Sweet and peppery (that's the beta caryophyllene) with a crazy herbal sensation that tickles my nostrils. Then there's Skinny Love, a hot coffee beverage containing Havana Club Anejo Rum, Lefty Bitters Aztec Chocolate Bitters, and Golden Apple's Thin Mint Terpenes (which is a special blend). It's served with house vanilla whipped cream and shaved dark chocolate.

Yeah, it's really good. Yes, the smell is out of this world.

So, what to terpenes have to do with cannabis?

Well, Golden Apple's Shawn Sherman will dish out the details for you. First off, though, I need to tell you a secret. These terpenes being served in Sidecar's cocktails aren't actually derived from cannabis—although, they could be.

"And we primarily did this really for liability reasons," Sherman said. "If I was to extract that molecule [the limonene terpene], it doesn't matter if it came from a lemon plant or a cannabis plant, it's the same molecule."

If you're someone like Christensen, who just got a flyer from the SLO County Health Department warning food and beverage establishments that it's still not strictly legal to include cannabis or derivatives of cannabis (i.e. CBD) in what you serve to customers, using anything that came from a marijuana plant is a no-no. Christensen called it a "friendly reminder" that even though the state legalized weed, our relationship with the plant remains very complicated. Plus, cannabis is still illegal at the federal level.

"I don't feel comfortable doing it because I don't want to put my license in jeopardy," Christensen said. "The laws are forcing us to become more creative."

Terpenes, Sherman explained, are basically aromatic oils that are in almost all vegetative plants. He said that even insects exude terpenes. Terpenes are a class of molecules, according to Chemistry Encyclopedia, that bring scents to your nose. They are the building blocks of essential oils. 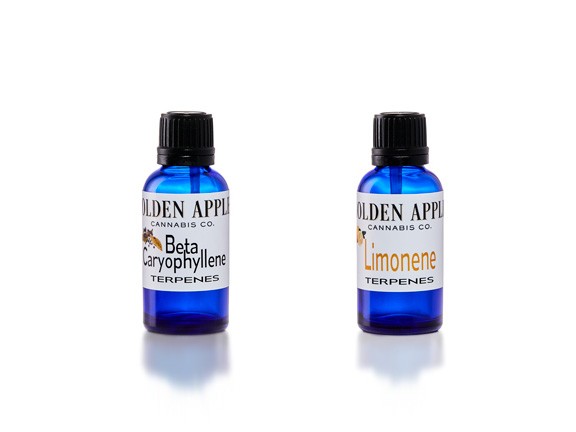 Sherman said he always uses lavender as an example. If he were to take lavender essential oil and distill it down, he would end up with linalool. It's the root of what makes lavender, lavender.

"If I was to throw lavender essential oil in a diffuser, it usually has a calming effect," he said. "That's due to the linalool that's affecting us physiologically."

More than 200 terpenes have been found in cannabis, and each cultivar is a little bit different, Sherman said. And although essential oil makers have known about terpenes forever, he said the cannabis world is bringing it into the public consciousness. Golden Apple's been dabbling in the terpene scene for about a year and half, he said, and is doing research on items like soda water and salves that include terpenes. In the meantime, the company has also been peddling non-cannabinoid derived terpenes to bars in the area, including Sidecar, Eleven Twenty-Two, and Fish Gaucho.

At some point, Sidecar and Golden Apple are planning to collaborate on cocktails that are reminiscent of the taste profiles for certain strains of cannabis, such as pineapple express. As Christensen said, laws around marijuana have led to creative thinking (such as using non-cannabis terpenes to mimic strains of cannabis in cocktail form). Sherman said the difference between strains of indica and sativa can be traced back to terpenes. While sativa is known as a cannabis strain with more uppity energetic effects on the user, indica has a more sedative, sleepy effect. Sativas, Sherman said, are higher in pinene (think pine) and limonene. Indicas, then, have more linalool.

Editor Camillia Lanham doesn't know much about molecules, but is all in on cocktails. Send your comments to clanham@newtimesslo.com.