Around the horn: Candidates for District 2 county supervisor square off at Morro Bay forum

The race to represent the North Coast on the San Luis Obispo Board of Supervisors pins three-term incumbent Bruce Gibson against two challengers: local business owner Jeff Eckles and attorney Patrick Sparks. An April 20 forum, hosted by the Latino Outreach Council and the League of Women Voters at the Morro Bay Vets' Hall, marked the first occasion that all three candidates vying for the District 2 seat shared a room.

"I come before you with a track record that I'm proud of," Gibson said to a full house. 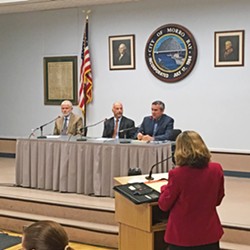 Eckles, the owner of Morro Bay House of Jerky and a former financial advisor, questioned Gibson's effectiveness in tackling issues like homelessness and mental health. He criticized the incumbent for practicing the "politics of division" on an often-divided Board of Supervisors.

"What I offer is new leadership and a fresh perspective," Eckles said. "The incumbent's had 12 years and he's asking for 16 years, and I believe policy approaches have been failing. I honestly believe we can do better."

Sparks, an attorney who noted experience working in the Atascadero State Hospital, called himself "the Republican in the group." He named "over-expenditures" in county government as the impetus for his run.

"I just can't take it," Sparks said. "The idea that things are OK is haunting to me."

Several questions from the audience touched on housing issues—cost, supply, and vacation rentals. Gibson favored policies that would reduce the number of vacation rentals on the coast, which he said is impacting the long-term rental market and hurting neighborhood character. One of his proposed policies is a tax on "second empty homes."

"In general, the issue [is] there are so many of them," Gibson said. "The effect they've had on housing affordability is profound."

While Gibson backed policies like the inclusionary housing program—an ordinance that requires developers to either build a minimum number of lower-priced units or pay fees to support other affordable housing projects—Eckles said he wants to identify "opportunity zones" in the county for developers to build.

"We need to incentivize builders to build the right types of homes in the right places," Eckles said.

Eckles has professional experience in the building industry, which includes serving as the executive director for the Central Coast Homebuilders' Association (CCHBA) and as the treasurer of the SLO County Housing Trust Fund. Gibson chided Eckles for prior efforts to lobby the Board of Supervisors against the inclusionary housing ordinance as CCHBA's representative.

"Jeff has come before the board to advocate positions that have helped our policies fail," Gibson said. "That program's been starved for funds."

While Gibson and Eckles both stated strong opposition to any offshore oil and gas drilling, Sparks said of oil drilling generally: "If it's available in a wise, steward way, I'm all for it."

Gibson called the Trump administration's recent approval of oil drilling on the Carrizo Plain National Monument "a direct insult to this county."

All three candidates expressed interest in the potential for a wind farm off SLO's coast, with Eckles expressing some concern about the impacts to the fishing industry.

"[Fishing] is the real essence and history of this area. It needs to be honored and taken care of," Eckles said.

On reforming mental health services following the death Andrew Holland, who died in jail after spending 46 hours in a restraint chair, the candidates differed on causes and solutions. Gibson said Sheriff Ian Parkinson was "ultimately accountable" for Holland's death, and added that while the county has rewritten policies and invested $2 million in jail health care for the next budget, "we need to change the basic culture of indifference towards the mentally ill." Eckles, on the other hand, placed blame at the feet of the county supervisors for failing to provide better mental health services. Eckles and Sparks also blamed state prison realignment legislation for overstressing county jails.

The candidates also touched on the legalization of cannabis, which all three supported as the will of county voters.

In Eckles' closing statement, he addressed the divide on the current Board of Supervisors, which is often split along partisan lines.

"Let's be frank ... there's a divide on the board. It's 3-2," Eckles said. "The only solution I've heard for that is, 'Let's flip that majority.' Folks, that is not a solution, that is not a path forward for healing. That's not going to give us the best policies. We can do better."

Gibson rebutted Eckles' comments in his own closing statement.

"The question for you is what kind of supervisor do you want? Are you looking for [the] healing [of] a sometimes-fractious board? Or are you looking for a supervisor who's going to stand up for your interests?" Gibson said. "I'm proud to have stood up for the values of this district."