Just six months after passing a total ban, members of the Arroyo Grande City Council voted unanimously to allow both personal cultivation and delivery of medical marijuana in the city for qualified residents.

The council voted unanimously at a June 14 meeting to modify an existing medical marijuana ordinance to allow for limited cultivation of plants, and set up a regulatory permitting process that would grant up to three medical marijuana delivery services the ability to operate within the city. 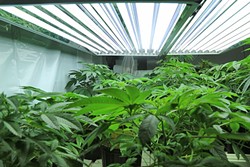 “Ideas change. People change,” Councilmember Tim Brown said. “We changed our minds based on what [the public] said.”

Under the new policy, the city will allow personal cultivation by qualified patients inside a detached, single-family residence. The grow cannot be in a kitchen or garage, and is limited in size to 50 square-feet and no more than 10 feet high. It also gives landlords the right to prohibit cultivation on their rental properties.

The revised ordinance also establishes a detailed permitting process for delivery services to operate in the city. The process, which city officials described as “rigorous,” requires prospective delivery service businesses to submit plans and safety procedures as well as documents and information on hiring practices, product testing, and quality, and requires drug testing and criminal background checks for drivers.

Under the new permit scheme, Arroyo Grande’s chief of police has the sole discretion to grant licenses for up to three medical marijuana delivery services.

“A lot of work has gone into this,” Arroyo Grande City Manager Dianne Thompson said. “We are one of the first cities in California to regulate delivery.”

The revision of the ordinance was good news for Cynthia Gonzalez. Gonzalez is the vice president of Elite Care Enterprises, a medical marijuana delivery service that hopes to operate in South SLO County. Gonzales said her family and the business came to the county from the San Francisco area just as Arroyo Grande and several other SLO County cities rushed to pass bans on cultivation and delivery in order to get out in front of new state legislation to regulate the medical marijuana industry passed earlier this year.

“We know of 50 to 70 patients in Arroyo Grande who we had to turn down for service,” Gonzalez told the council during public comment.

Gonzalez says that lately, Elite Care Enterprises has been focusing on advocacy and outreach, and meeting with officials from South SLO County cities like Arroyo Grande, Pismo Beach, and Grover Beach. During the meeting city officials acknowledged that some of the policies in the ordinance were based on discussions and information from Elite Care Enterprises.

“We tried to make ourselves available to them,” Gonzalez told New Times. “We’ve been well received by the cities. They’ve been very gracious.”

While Arroyo Grande now allows for personal cultivation and delivery, there is still a ban on brick-and-mortar medical marijuana dispensaries.

As the city moves forward with its new policies, both city officials and council members acknowledged that things could once again change if California voters approve recreational marijuana legalization, which could appear as a ballot initiative in the November elections.