As Ovid tells it, the affair between the Greek god Apollo and the nymph Daphne began with an insult. Apollo mocked Cupid’s arrows, so the god of desire took his revenge. He shot Apollo and Daphne with two arrows. The first, made of gold, would make Apollo fall in love with Daphne. The second, made of lead, would do the opposite. Daphne would loathe Apollo. And so it goes. Apollo chased after Daphne relentlessly until the day he came too close and she cried to her father for help. In order to protect her, he turned his daughter into a tree—forever unattainable and forever young. 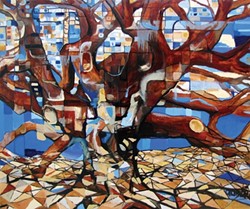 In Jordan Quintero’s painting of this classic myth, he centers Daphne’s naked, human form in the trunk of a sprawling tree. Her stark, white arms evolve into twisted and knotty branches. Those branches then entangle themselves within the intricate and bold shapes that make up the clouds and sky. It’s an organic progression, but one rendered with rigid lines and sharp distinctions. In style and shape, it’s both natural and unnatural—a central tension at play in Quintero’s work, which can currently seen in his exhibit, Relics, at Big Sky Café in San Luis Obispo.

Based in Arroyo Grande, Quintero says he grew up “torn between two worlds.” His father lived in the Bay Area while his mother was located here on the Central Coast. As a kid, he was creative. He drew comic books, wrote, and played guitar. But he was also active outdoors. He picked up construction work during high school, and spent two months surfing and traveling around Costa Rica right after graduation.

Then, one class changed everything.

As a student at Cuesta College, Quintero enrolled in figure painting class. There, he developed an eye and a skill for classical forms and methods. He ventured to Spain to see the works of the old-school European masters up close.

“In Europe, art is a trade,” he noted during a visit to his in-home studio. “It’s respected. They value it, see it as respectable. … A lot of my aesthetic is from my life and my time spent in the Mediterranean. I really attacked Western art history.”

You can see those influences clearly in not only his style, but his subject matter. Quintero infuses most of his works with the stories, symbols, and characters of the Greek mythological canon—Pygmalion, Galatea, the Trojan Horse, and the tragic Cassandra, for example. He paints them in classical poses, like those found in Renaissance sculpture, surrounded by scenery rich in the kinds of lurid blues, browns, and greens only the Mediterranean could boast. 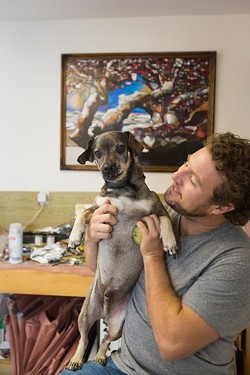 But there’s something different here.

Quintero grounds his works in the realism of classical methods and aesthetics. He sketches his ideas, workshops them into various studies, and organizes his works around a theme. There’s a craftsman-like approach to his process. Piles of wood and canvas line his studio. He does his own framing, using 90 percent recycled material. He’s old school. Sort of.

Back to the Daphne painting. If you look past the central figure, the sky is far from classical and far from realistic. Instead of round, soft clouds, there are layered patterns of grid lines and geometric shapes. In his painting Zeus in Dodona, the tree branches meld together with the sky in a patchwork quilt of brown, beige, and blue squares. It’s a tangle of color and form that is somehow disruptive and orderly at the same time.

“I like there to be an element of interruption,” Quintero said.

He notes that this tendency to break up a painting with abstract patterns may derive from his comic books days, where a single story could be parceled out into individual grids. But there’s a deeper, more personal and philosophical intention at hand here—a need for harmony.

Quintero’s paintings and drawings bridge disparate elements into a cohesive whole. He’s a California artist with a European sensibility. He has a style that combines classical roots with modernist aesthetics, and his scenes synthesize people and nature in a way that emphasizes tension to intriguing effect.

“It’s about finding a balance,” he said. “Art, for me, is a search for meaning and to create meaning. I want people to examine their life and examine art. It’s intensely personal and organic. I’m really into the idea of the natural and the biological and how we pair ourselves into them. The environment, I think, is the story of our time.”

It’s all Greek to Jessica Peña. You can tell her what it all means at jpena@newtimesslo.com.