Five candidates are competing for just two seats on The Arroyo Grande City Council. The contenders pitched themselves to voters at the South County Government Center during a Sept. 4 candidates forum.

Audience members submitted questions on a variety of issues, from their stance on construction moratoriums to saving water to their general philosophies of governing. But one of those questions tackled an issue that’s stymied Arroyo Grande and other South County cities for years: How to help the area’s homeless population.

According to the county’s most recent “point-in-time” homeless count, conducted in 2015, there was an estimated 258 homeless individuals in the South County area, which encompasses Pismo Beach, Grover Beach, Oceano, Nipomo, and Arroyo Grande. Of that population, nearly 80 percent were classified as unsheltered.

It’s a complex regional problem with no easy solution. But nonetheless, the candidates attempted to boil down their views on it and explain them to the forum’s attendees within the short amount of time they were allotted to answer the question. 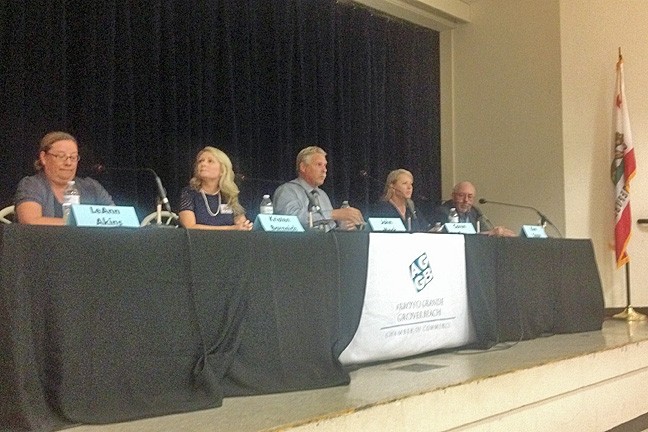 Mack, who currently serves on Arroyo Grande’s Planning Commission, said he believes the city could commit more resources to help the homeless get back on their feet.

“More importantly, we need to provide them with a place to sleep,” Mack said.

South County has no homeless shelter, the exception being a warming center that occasionally opens up during wet or cold weather. The closest overnight shelter is located in San Luis Obispo.

Caren Ray, a former SLO County Supervisor and Arroyo Grande City Council member, advocated for the city to bring back and expand a “safe-parking” program. The small-scale 2012 pilot program allowed homeless individuals to park and sleep in their cars overnight at the St. Barnabas Episcopal Church. A previous incarnation of the council approved the pilot program for six months, but it was never extended past that period.

While such a program would be helpful, Ray noted that a more comprehensive approach would be necessary.

Ken Sage, an Arroyo Grande traffic commissioner, also spoke of the problem as a regional matter that any one city in South County would be unlikely to solve on its own.

LeAnn Atkins, an Arroyo Grande resident and first-time candidate, said the city and other invested parties needed to take a closer look at the root causes of the area’s homelessness.

“We need to drill down and look at the different groups of people that find themselves in that situation,” Atkins said.

For possible solutions, Atkins looked to the state of Minnesota, where the nonprofit People Serving People provides a comprehensive model to find long-term housing, a job, and social services placement for homeless individuals and families.

“It’s proven to be very effective,” she said.

Councilmember Kristen Barneich, the lone incumbent in the race, serves on the SLO County Homeless Oversight Committee. She said that the county has several programs trying to help the homeless and advocated for an approach that provided housing for them.

“There’s a housing-first model that’s sort of new to the nation and our county where you put people in housing first, then you get them the services they need,” Barneich said. “Because when you’re living under a bridge, it’s hard to go out and get a job.”