Vapes and e-cigarettes in some form have been on the market for nearly a decade, but it wasn't until about two years ago that Caren Ray Russom started finding them constantly in the hands of her high school students. Since then, it's only become more common to catch students vaping or with vapes on campus, and within the last year alone, Russom said the situation has reached "epidemic proportions."

Russom is a history teacher at Santa Maria High School and the mother of two teenage boys, so when she started finding e-cigarettes at school, she asked her own kids about the trend. They confirmed her fears: "Everyone is doing it," they told her. 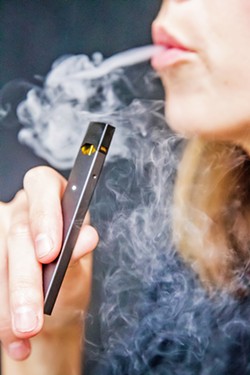 So for years Russom has felt passionately about putting up whatever barriers possible between kids and the electronic cigarettes they legally aren't supposed to have. With the nation's spotlight currently shining on several recently reported deaths and thousands of illnesses related to vaping products, she hopes her fellow community members are ready to do the same. As the mayor of Arroyo Grande, Russom is pushing for her city to be the first in San Luis Obispo County—and one of the first in the nation—to ban the sale of e-cigarettes and vaping products entirely.

"As mayor, a high school teacher, and the mom of two teenage boys, I'm on the front lines of this in every facet of my world," Russom told New Times. "This is a desperate public safety issue, and I cannot sit back, being in a position of power, and not do anything."

At a meeting on Sept. 24, Arroyo Grande City Council gave the go-ahead to Russom's request to initiate a city staff analysis into a potential ban on the sale of vaping products and electronic cigarettes within city limits. A public hearing on the matter will likely be held at the City Council's Oct. 22 meeting.

The number of U.S. high school students who reported e-cigarette use increased by 78 percent between 2017 and 2018, according to the 2018 National Youth Tobacco Survey. Numbers among middle schoolers rose by 48 percent. While cities, counties, and some states across the country have moved to ban the fruit- and candy-flavored juices that are often blamed for the prevalence of vaping among teens, few jurisdictions have gone forward with all-out bans on the products, often out of fear of legal challenges.

In the last few months, hundreds of hospitalizations associated with e-cigarettes and vaping products have come to light. As of Oct. 1, the Centers for Disease Control and Prevention (CDC) had recorded more than 1,000 "lung injury cases" associated with e-cigarettes and vaping, and 18 deaths. Nearly 70 percent of those patients are men, and nearly 16 percent are younger than 18 years old. The CDC says no single product or substance has been linked to every case. A single cause is still unknown.

"Now that people are dying—young adults and children are dying from these products—the total ban on all e-cigarette products seems to make more sense," Appanaitis said.

In June, San Francisco became the first city in the U.S. to pass an all-out ban on the sale of e-cig products, and Appanaitis said Livermore is the only California city she knows of that has followed suit. Others are trying or considering it, though, she said, and most of those jurisdictions are modeling their bans on San Francisco's, which ties the ban to Food and Drug Administration (FDA) approval.

None of the e-cigarette and vaping products currently on shelves have been approved by the FDA, Appanaitis said, and that makes it almost impossible for consumers to know what's really in the products they're using. Banning the sale and delivery of those that haven't received FDA approval effectively bans all existing e-cigarettes and vaping products from city limits.

It's a smart strategy, according to Appanaitis. If Arroyo Grande were to do the same, Appanaitis said it would be "a significant barrier" to those hoping to get their hands on the products.

San Francisco has faced legal challenges—e-cigarette company Juul spent nearly $18.6 million campaigning to get a measure that would overturn the city's ban on vaping products onto its next election ballot—but Appanaitis said huge manufacturers like Juul aren't likely to focus on SLO County's small cities. Arroyo Grande is still in its early stages of planning for the potential ban, but Appanaitis said she hopes other cities push for similar regulations.