If you plan on trying to turn your bottles or cans into a little cash in Arroyo Grande, you are out of luck. 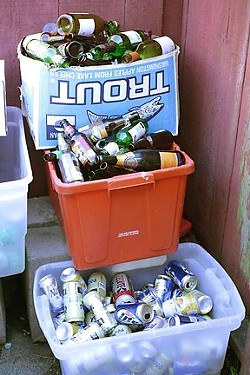 Recycling centers across California are on the decline, and Arroyo Grande is no exception. At a Nov. 14 City Council meeting, City Manager Jim Bergman said that there are currently no recycling centers within the city limits, with the closest one located nearly 10 miles away in Nipomo.

Bergman said the situation in Arroyo Grande mirrors what is happening at the state level. According to an August 2017 report by CalRecycle, the statewide recycling rate dropped to 44 percent in 2016, the lowest it's been since the state established a goal of 75 percent in 2011. Those lower rates and the disappearance of return centers could have a monetary impact on grocery stores, according to Bergman.

"There's a potential for increased financial impact to local stores," he told members of the council at the meeting.

That's because, according to California law, recycling centers must be located within a half-mile of large grocery stores or the stores must offer recycling on their premises. If they are not able or willing to comply, those stores must pay a $100 per-day "opt out" fee.

According to Glenn Martin, an Arroyo Grande resident and commercial property manager, most large grocery stores would rather pay $36,500 annually than operate the centers.

Still, councilmembers like Barbara Harmon worried that smaller or family owned stores might be unduly burdened with the fees and have few resources to convince the state to make any changes to its recycling program.

"They don't have the ability to have an army of lawyers or lobbyists advocating for them either," she said.

At the meeting, Bergman said that thus far none of the three grocery stores within the city limits were currently paying those fees. He chalked that up to the fact that some likely fall under the law's exemptions, which take into account residents' participation in other recycling programs.

"Most of our cans probably get recycled because we have curbside recycling in our community," Bergman said.

In an effort to encourage the state to address the issue, the council voted to direct city staff to advocate for legislative changes to the program at the state level through the California League of Cities and the SLO County's Integrated Waste Management Authority, and asked that Mayor Jim Hill write letters on behalf of the council to state legislators like Assemblyman Jordan Cunningham and Sen. Bill Monning.

"It's not good enough that the state gets a pass on this," Harmon said. "They created this monster." Δ