In less than three months, Arroyo Grande will join a handful of California cities that have made it illegal for young adults and minors to possess tobacco products, and many local and national health and tobacco prevention groups aren't happy.

At a meeting on Nov. 26, Arroyo Grande City Council unanimously passed an ordinance banning the sale of all vaping products and electronic cigarettes not approved by the FDA. Council members also unanimously approved an ordinance prohibiting residents under 21 from possessing all tobacco and e-cigarette products, punishable by a fine of $75 or 30 hours of community service. 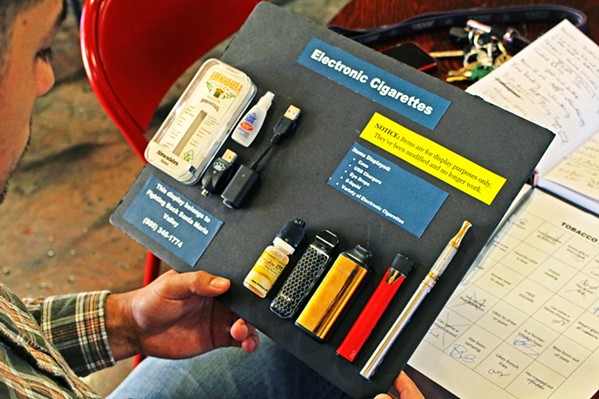 Both ordinances will go into effect on Feb. 26, 2020, and are part of an effort to curb the surging popularity of vaping and e-cigarette use among teens. Council members say the issue is especially pressing now that 48 deaths and more than 2,000 lung injuries nationwide have been linked to vaping and e-cigarettes.

But while local health and tobacco groups applauded Arroyo Grande's ban on e-cigarette sales, they spoke out against the criminalization of possession and said such prohibitions unfairly punish nicotine-addicted youth for the problems caused by the tobacco industry and its retailers.

In a Nov. 7 joint letter to City Council, The American Lung Association, American Cancer Society, and American Heart Association wrote that they all helped push the state to repeal its ban on minors in possession of tobacco products—known as a youth purchase, use, and possession law, or a PUP law—in 2016 when the state also raised the minimum tobacco purchasing age from 18 to 21.

"Our organizations did this because civil and criminal penalties for youth purchase, use, and/or possession have not proven to be effective enforcement measures and detract from more effective tobacco control strategies," the letter reads. "We believe that any penalty (if the law is broken) should be levied only on the retailer and not the underage purchaser."

PUP laws, the organizations wrote, are expensive, difficult to enforce, and ineffective in keeping kids away from tobacco and e-cigarette products, and they disproportionately impact people of color.

The San Luis Obispo County Teen Task Force and the county's Health Commission wrote similar letters to the council opposing the ban on possession, highlighting similar issues with the ineffectiveness of the ordinance and better ways to prevent use of e-cigarettes and tobacco products.

Jenelle Merzon, a health education specialist with the SLO County Tobacco Control Program, which also took a strong stance against Arroyo Grande's youth possession ban, said it's "almost embarrassing" to be among one of the few counties in California where a locality has instated a PUP law.

"It's definitely something that's opposed pretty much across the line for tobacco control programs," Merzon said.

One of the major issues with criminalizing youth possession of tobacco products, she said, is that it inflicts a greater impact on marginalized communities.

While a $75 fine could be easy for a wealthy or middle-class family to pay off, the child of a low-income family could be forced into doing 30 hours of community service. Merzon said those hours could also be difficult for some kids to complete if their parents are working long hours or lack dependable transportation, as many lower-income families do. If the fine goes unpaid and the community service uncompleted, the child would only be further penalized and pushed deeper into the criminal justice system.

Merzon said there's also evidence to suggest that because of racial disparities in schools, among police, and in e-cigarette and tobacco marketing campaigns, kids of lower socioeconomic status will be cited for possession at higher rates.

Although several City Council members suggested in past discussions that these issues wouldn't impact Arroyo Grande because of its small population and demographic, Merzon said health and criminal justice disparities impact jurisdictions of all shapes and sizes.

"So even in a city like Arroyo Grande, I don't see it being any different," she said.

Despite all the dissent to the penalties for possession, City Council sided with the Arroyo Grande Police Department, which pushed for the PUP law as a way to keep at least some kids from bringing e-cigarettes and vapes on campus.

At a City Council meeting in October, AGPD Chief Beau Pryor brought a school resource officer who said even though the popularity of e-cigarettes and vapes has exploded at local schools, he has no way to reprimand students who are caught with those products on campus.

When it comes to tobacco, the investigation and disciplinary process is handled entirely by teachers and administrators, and he said the last resort of punishment for repeat offenders is suspension. With even just the threat of a criminal citation on the table, he said some kids would probably stop bringing these products to campus.

At the Nov. 26 meeting, Pryor assured council members that a citation wouldn't be the AGPD's first line of defense in deterring use of tobacco products among youth. Even if a citation is issued, the student cited would be provided with several options for having the charges scrubbed from their record, including traffic court, completing the goals outlined in a formal aversion contract, and attendance in a mediation or cessation program.

Pryor also said the citations would allow the department to better track the kids who are repeat offenders and whether their cessation programs are working.

That data collection portion is important to Arroyo Grande City Councilmember Jimmy Paulding, who said at the Nov. 26 meeting that he was somewhat concerned that the ban on possession could actually do more harm than good.

"I do think that some of the considerations raised by the SLO County Teen Task Force and the Health Commission are legitimate, so I really hope this action isn't putting us in a position where we are going to harm those kids," Paulding said. "So the tracking to me is really the way to assess whether this is working and how it's working."

Paulding said that while the possession penalty could be problematic, schools don't have many other enforcement options because of the way schools are rated by the state, a ranking that includes test scores and suspension rates. The higher the suspension rates, Paulding said, the lower the score. So schools have a disincentive to take serious disciplinary action against students caught with vapes.

He also added that the ordinance includes a look-back, which will allow City Council to reassess the law after a year and decide whether it's really helping to deter kids from using vaping products.