Arroyo Grande, Grover Beach, and Oceano have been bound together since 2010 by a joint powers agreement to maintain fire protection service through the Five Cities Fire Authority.

On Feb. 26, Arroyo Grande City Council members discussed whether the city could remain in the joint powers agreement. Mayor Caren Ray Russom said Arroyo Grande wants to be in the agreement with the other communities—that's the goal. However, she said the reality is that a modern fire department can't stand on its own anymore. 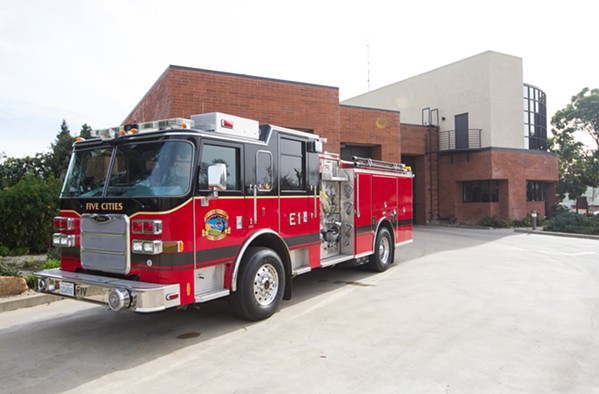 The Fire Authority has been facing the challenge of recruiting and retaining firefighters to consistently staff the department and service the three communities.

In 2017, the department created a five-year strategic plan that included a proposal to switch from part-time reserve firefighters to full-time career firefighters, which increased the size of the department's budget. The following year, the Fire Authority proposed an amendment to get the personnel transition into motion, which is part of the agreement that Arroyo Grande, Grover Beach, and Oceano have yet to approve. If the communities don't agree to the amendment by April 1, the joint powers agreement will dissolve on Dec. 31.

According to the agreement for the 2018-19 fiscal year, Arroyo Grande would put forth $2.5 million, Grover Beach would pay about $1.8 million, and Oceano would contribute $987,362.

"The complication is the cities of Arroyo Grande and Grover Beach have big enough budgets that we can move numbers around according to the priorities of the council," Russom said. "Oceano doesn't have that."

The Oceano Community Services District currently spends 97 percent of its property tax revenue on fire operations. Oceano could look into an option to increase its portion of the funding—a $150-per-year parcel tax increase for Oceano property owners. The tax would need to be approved by two-thirds of district voters.

At the Feb. 26 City Council meeting, San Luis Obispo County Administrative Officer Wade Horton said the SLO County Board of Supervisors has created an ad hoc committee to further explore the challenges that special districts are facing in the county, such as current fire services. Horton said SLO County's 1st District Supervisor John Peschong and 2nd District Supervisor Bruce Gibson would be willing to sit down with a council designee to discuss the challenges and see if they can find resolution.

The council agreed to the meeting and Russom said she doesn't know what the county is going to propose. But she said the issue is complicated because of the nature of a community services district.

The county has seven community services districts, she said, and the districts are all dealing with the problem of their fire services being underfunded because the cost for providing service has increased.

"So if the county comes in and says, 'Yeah, we want to help Oceano,' the problem then is the county is going to have to help Templeton and Cambria and Cayucos and San Miguel as well," Russom said.

Horton said that he wants to make it clear that sitting down to have a conversation does not mean that any decision will be made.

"The county is also facing a budget deficit that we need to close as well, so I think the ideal solution is the folks of Oceano would approve the parcel tax so they can stay in the joint powers agreement," he said. "But it would be premature for me to say anything at this point, before we get together and have the opportunity to discuss any options."

Before the Five Cities Fire Authority's joint powers agreement, Arroyo Grande, Oceano, and Grover Beach each had separate all-volunteer fire departments. In 2010, the three communities banded together to form a three-department agency.

The Fire Authority operates under a boundary drop policy, which ensures that the closest appropriate engine is dispatched to the call, no matter where the incident is or what community the engine is stationed in.

Across the state, the cost of providing fire protection has drastically changed over the last couple of years. In order to guarantee that a station is staffed with a firefighter, the once mostly volunteer model is changing to having paid positions.

The Fire Authority's firefighter personnel transition will create a base budget increase of more than $1.3 million annually when completed. According to a staff report, the current budget provided for the initial transition to career firefighters who are already assigned to the Arroyo Grande fire station. The projected fiscal year 2019-20 budget includes funding to continue the transition at the Grover Beach station, and finally, the Oceano station in 2020-21.

The Arroyo Grande City Council ultimately decided to continue the discussion to its next meeting slated for March 12. Δ