While Editha Spencer lay in the hospital, Harold Spencer drew trees. Sixty-three years of marriage culminated in a two-dimensional forest on a sketchbook near her bed.

“It was so very simple,” Harold said, seated in his Paso studio. “I could just draw a fanciful tree, and it just kept me occupied, not thinking about what was impending. And so during that period, it was a few weeks, I got hooked on trees.”

After Editha’s passing in late December of 2010, Harold kept doing the trees. They look dark and strong and grow thickly together, a far cry from the airy, bright, reaching trees his wife was so fond of. As fellow accomplished artists, each one’s work had always been very different from the other’s.

“She was so good at sketching, at getting down the absolute essentials of an image, and I was really sometimes almost jealous of her, that she could do that so well,” recalled Harold. “Mine looked so labored, and hers so fresh and spontaneous.”

Curated by her husband, a retrospective of Editha Spencer’s enviable talent in a variety of media currently hangs in the atrium at Paso Robles’ Studios on the Park. Titled “A Summerhouse and Other Motifs,” the memorial show encompasses the decades of Editha’s work in oils, watercolors, gouache, drawings, and woodcuts. The subjects range from sweet, pastoral images from the couples’ travels to the naval ships and crashing planes Editha painted to illustrate articles for Oak Leaf, an Oakland magazine published by the U.S. Naval Supply Depot.

Still, the summerhouse is the exhibit’s dominant theme. Less a place of residence than a temporary resting spot, the structure sitting alone in a field near the couple’s Ashford, Conn., studio ignited Editha’s imagination.

“That was that little gazebo-like structure that one of my sons and I put up,” Harold explained. “And it just struck her. What she liked, really, was the geometry of the things we put into the landscape, and the more fluid forms of nature. A kind of counterpoint, playing one against the other. I think it was the attraction of that relationship that led her to keep dealing with that motif.” 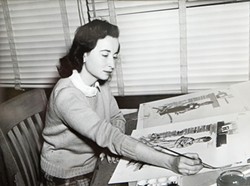 Editha’s paintings of the summerhouse continued long after the little structure was torn down. She rarely took photos, Harold said, preferring to work from memory or from life. The six sides of the gazebo compartmentalize the watercolor field in intriguing ways, the hue of a hill or a tree suddenly altered when seen between the clean lines of the little white shelter.

Editha majored in art at the University of California, taking a job as art editor at Oak Leaf after graduation. She and Harold met quite by chance. An upstate New Yorker, he was returning from his first voyage with the Merchant Marines and docked in San Francisco on the return journey from New Guinea. At dinner with a friend, he met an Oak Leaf copy editor who showed him a copy of the magazine. Flipping to a page of staff snapshots, his eye lit upon a young Editha Hayes.

“In the upper right-hand corner of the page was this lovely brunette with a brush in her hand, looking around, as if someone had said, ‘You’re on camera,’” Harold remembered, attempting to replicate Editha’s coy look.

Smitten, he immediately asked to be introduced to her. “I exploded with enthusiasm,” was the way he put it.

After just two or three days together, Harold said, he knew: “This is the lady I am going to spend my life with. She was special.”

Thus began a flurry of long letters dispatched over various seas, illustrated with little drawings and cartoons. Harold would visit when he was in port, spending the following weeks “wondering if she would still be there waiting for me, or whether I’d get some Dear John letter when I was out in some Godforsaken place out in the Pacific,” he said. “I was always crossing my fingers,”

World War II ended, and Editha agreed to marry him.

“It was a wonderful marriage—from my point of view, certainly,” Harold said. “I think she thought it was all right, too.”

He speaks lovingly, even joyfully, of his wife, their many travels, and of her uncanny talents as an artist and poet. Behind us, a new forest grows thickly and darkly on the easel.

Arts Editor Anna Weltner looks into the wild. Contact her at aweltner@newtimesslo.com.