The fine young cannibals are out in force tonight at Coalition’s SLO Skatepark silent auction fundraiser. I see them gather ’round the hors d’oeuvres table, gobbling cheese and crackers, nuts and Halloween leftovers, and gulping the free wine and beer. They congregate in clusters throughout the shop, preening and chatting and gobbling and gulping.

Not a lot of silent auction bidding going on.

I’m concerned that this isn’t a crowd that’s going to raise the $450K or so needed to see this dream through, but maybe I missed something earlier. I’ve arrived fashionably late, after all—about 8 p.m.—and in short order a charming ingénue with strawberry-colored hair approaches and announces she’s determined to learn and remember everyone’s name—no small task considering the 150 or so people littering the space.

“Hi! I’m Nicole,” she offers, in her flannel shirt and skinny jeans, her glasses struggling gamely to obscure her utter adorability. “What’s your name?”

“Everyone’s fucking with me tonight,” she laments, smiling a little less brightly.

Then she launches into a story about how her boyfriend Cory—[WTF? Boyfriend?]—worked all week on some art piece and brought it to donate, except organizers told him he was too late and they already had too much art and no more room.

“ … and he made these cool cutout monsters in neon, and he was doing it for free, to donate,” she emphasizes to make sure I understand the injustice of it all. “And he had to borrow my car!”

The final insult! A loaned car come to naught.

“At least he was making art all week,” she reasons, her good nature returning.

Not a short answer. She’s a server during the day at a new restaurant called Chow and she’s a caregiver to old people, and she “sells anti-aging products.”

My wheels are turning at how diabolic it all sounds: “So, what? You take care of these old people who are on their last legs and you try to peddle them overpriced anti-aging products?”

“Yeah, right,” she spits, going into her grifter sales pitch. “‘I know you’re, like, 99, but you’re gonna feel eight years younger! You’ll feel 91 again!’ No! [The ‘you jerk!’ is implied.] They want to put puzzles together.”

“That’s the anti-aging products!” she squeals, once again delighted. Strangely, she doesn’t try to sell me any. As I wander off, I can’t help but assume that, like her 99-year-old wards, she believes I’m beyond the help of her potions, ointments, and unguents.

Then I run into a couple of old friends, Jim and Christy Hamari, and explain my notepad.

“’Christy the fabulous showed up,’” Christy dictates to me. “No, write it down.”

I suddenly feel like a society page gossip columnist, so I note that Jim’s dressed slacker cool, but Christy corrects me and directs me to note he’s wearing his Che Guevara shirt while she’s wearing a Oaxacan embroidered camisa. 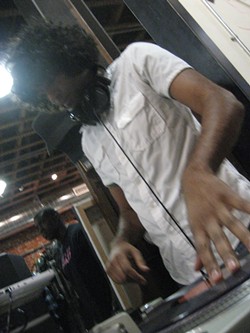 I reach out and feel her not nearly as third world and politically correct sheepskin jacket.

“My dog died recently, so I put his fur on my coat,” she sneers, reminding me there’s no arguing with Christy. She takes your lemons and makes them into hand grenades.

There’s a crowd gathered near the front of the shop watching Dethkills create a painting on the spot. Turns out Dethkills isn’t a person, it’s people (like Soylent Green), an art collective of which three members—Derek, Bobby, and Chris—were collaboratively working on an image.

They hail from L.A. and work for the Australian clothing company Insight, who hires them to travel around and do hella-cool things at awesome events so fine young cannibals will buy and wear Insight clothes.

I’ve tried to do collaborative art myself, so I’m surprised their group painting doesn’t look like a how-to abortion poster made by a “collective” of untrained finger-painting retarded monkeys. In fact, it’s a weirdly cool drawing of a skater made up of words, squiggles, washes, and marks. How do they manage it?

“We don’t take it too seriously,” says Derek. “We’ve known each other forever; we’re best friends.”

“And it’s hard to get mad at your best friends,” says Bobby, “unless they hook up with your lady.”

“We’re all skaters,” adds Derek, “so this event is the kind of thing we’d support.”

Then the beer runs dry and people start to filter out—those under 21 drifting into the Friday night ether, those 21 and older making their way to Native Lounge for the after hours party.

Once there, people dance, drink, laugh, and lie. I mingle, think about the auction—the grand dream of an in-ground concrete skatepark, the slightly more than $3,500 raised tonight. It ain’t half a mil, but if an arty party at a skate shop filled with mostly spunky kids can generate $3,500, maybe anything is possible!

After all, Nicole remembers mine out of 150 names.

“Nice to meet you, Shaft!” she yells, waving brightly from across the room.