Andrea Bowers is an artist with purpose. Her work documents nonviolent activism, dredges up forgotten histories and activists, and presents viewers with these histories through new and unlikely media.

Bowers was interested in art as a child, but it wasn't until 2003 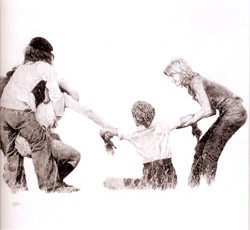 # that she began work on a project focused exclusively on documenting nonviolent activism. In late 2002, an activist named John Quigley began the first suburban tree sit when he spent 71 days living in an oak named Old Glory. Eventually, authorities in L.A. County removed Quigley from the tree, but Bowers captured the struggle in her film, Vieja Gloria.

"I'm interested in activism but it's not just any type of activism," said Bowers, the daughter of local activist Ann Ream. "I tend to focus on progressive projects, specifically focused on nonviolent civil disobedience. I think political issues are always a subtext of my art."

Bowers will be discussing Vieja Gloria at the second annual Ruth Fash Memorial Lecture on Dec. 3 at Cuesta College. ARTS Obispo began the lecture series in honor of local artist Fash, who also incorporated activism and feminism into her work. In addition to discussing Vieja Gloria, Bowers plans to talk about several of her other recent projects, including one that landed her in the fall 2006 issue of Ms. Magazine.

"Nothing is Neutral" is the title of a traveling exhibit that's occupied much of Bowers' time over the past year or so. She used one facet of the exhibit, "Letters to an Army of Three," as an opportunity to educate herself about Roe v. Wade and abortion rights. In the mid 1960s, prior to Roe v. Wade, three activists based in California Pat Maginnis, Rowena Gurner, and Lana Clarke Phelan compiled a list of doctors in other countries who were willing to provide abortions. Desperate men and women wrote to the trio later referred to as the Army of Three requesting the list. Bowers, who bases much of her work on historical research, drew copies of these letters, displaying them in the exhibit. Additionally, she created videos of women reading the letters, pleading with the viewers for a list that could give them or their daughters a second chance at the life they'd like to lead. Bowers also drew elaborate flower patterns that clash with the heaviness and desperation of the letters and created a bound book that people can look through. Working alongside the two activists who are still alive, Bowers wanted to bring the history of abortion activism to life.

Because much of her work is based on historical archives, Bowers is very conscious of history as an active resource that people can interact with and learn from. That's not to say that she's presenting a nostalgic view of the past. Instead, she encourages people to re-evaluate the past, to question what and who might have been ignored during history class.

"I personally find that history has a significant effect or relation to what's going on in the world," Bowers said. "I don't think histories end. I think we can learn from the past."

# Another of Bowers' projects, "Magical Politics," may resonate with San Luis Obispo residents concerned about the presence of Diablo Canyon. It's a series of pieces exploring nonviolent civil disobedience in America. One of the examples is the women's group that protested the Diablo Canyon nuclear power plant during the 1980s. As many local groups and individuals continue to battle against the plant, Bowers' project validates her belief that history can retain its poignancy even decades after an event.

Bowers' project, "Eulogies to One Another," was also displayed during the "Nothing is Neutral" exhibit at REDCAT (the Roy and Edna Disney/Cal Arts Theatre) in L.A. Based on Internet eulogies for an American activist named Marla Ruzicka, the exhibit argues that Americans place different values upon human life depending on a person's nationality. Ruzicka, who went to Iraq to find Iraqi casualties of war, was killed by a car bomb in April of 2005. Her Iraqi driver, Faiz Ali Salim, was also killed, but few of the obituaries bother to mention his name.

Bowers plans to discuss these and other projects during her lecture, and she'll also bring visual aids for anyone interested in seeing examples of her work.

"I always make scrapbooks that go along with most of my projects so that any information that I think is necessary, people can look through," Bowers said.

Of course, through making her own books, she's also creating her own histories that people can read through in an art form that's historically been disregarded as arts and crafts. When it comes to Bowers' work, nothing is as simple as it seems.

INFOBOX: Getting the message

Andrea Bowers will speak at the Ruth Fash Memorial Lecture at Cuesta College on Dec. 3 at 3 p.m. The lecture takes place in Conference Room 5401 and guests are welcome to park in lot 2. The event is free to the public. Anyone interested in viewing Bowers' documentary, Vieja Gloria, can do so Monday through Friday from 10 a.m. to 4 p.m. at ARTS Space Obispo in the Creamery. The video will be shown Dec. 1 through 20. For more information, call ARTS Obispo at 544-9251.