It’s Friday, Aug. 7—the first Friday of the month—and I have no idea where the hell I am. We were trying to go to Left Field, Nick Wilkinson’s new SLO Town home/garden/gallery store on Monterey, but instead I was lured down a sidewalk by some music played by a guy named Aaron Kimbell, and now, I’m standing in a big room and a lady in hospital scrubs is asking if she can help me.

“This is Open Canvas Laser,” explains Emerald McLeod. “We do tattoo removal and skin treatments.”

“Really? Can you get this crap off my wife’s foot?” I ask, gesturing to Anna’s awesome shooting star tattoo that I really love.

My wife breaks the tension by telling me to shut my face, after which the ladies can see I’m joking. Anna gives the ladies a sympathetic look, as if to assure them she knows I’m not as funny as I think I am. Tough crowd.

“I really like this dog painting,” I say, pointing to a Dalmatian getting its spots blown off by a fan. 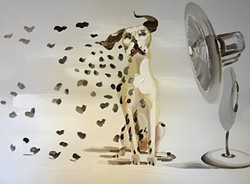 “I bought that over the Internet,” Emerald admits, explaining how it represents her—she’s an RN—and her doctor husband Dr. Wil McLeod’s business of removing tattoos. Their biz has a great space for displaying art, but I have to admit, the Internet-bought dog print is my fav of all the stuff they have on display.

We finally find our way back to Left Field, mainly because I want to see Eric Yahnker’s portrait of Bill Cosby reading Dr. Seuss’ Sleep Book, which I feel compelled to flip-off because Cosby, who I used to love, has turned out to be—allegedly—a reprobate and serial rapist.

“Where’s Nick?” I ask a guy behind the counter.

“He wanted to be here but had to go to the biggest succulent show in LA,” the guy says, and I believe it because Left Field and its Cambria sister store, Grow, specialize in awesome succulents.

Anna and I make our way toward Yarns … at the Adobe to see Ragtime’s show, but before we get there we’re sucked into Que Pasa Mexican Café and Tequila Bar by the thought of their sizzling chicken enchiladas and a couple of those giant Mexican flag margaritas. You need fuel to get through Art After Dark!

Satiated, we continue on and soon we’re in the secret garden behind the adobe, and it’s pretty packed. I see a couple other Ragtime members—Mary Wood and Julie Frankel—and then I see last week’s Art Bash star Liz Rhoads Cordoba, who shows us the finished product of her Alabama Chanin coffee dress. Super cool!

We figure we’ve got time for one more stop, so we head back up Monterey Street and take a right down Rose Alley, the super secret location for Assets, Julia Pickslay’s exercise studio where she teaches barre workouts. My ex-ballerina wife’s been there a few times, and she says it’s a kick-ass workout! 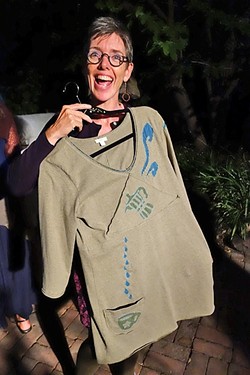 The walls of the bare red-brick studio are covered by figurative oil paintings and charcoal drawings by Christine Cortese, who clearly digs the human figure. Assets, like Open Canvas Laser, is a great example of downtown businesses that have embraced the Art After Dark scene, which itself is a reminder of the depth and breadth of our SLO Town talent pool. Maybe it’s time for you to take a walk around town and dive in? 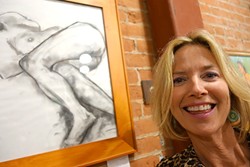