Fake News, an exhibit featuring the artwork of Mark Bryan, will be on display at the San Luis Obispo Museum of Art through April 26.

Corbett Canyon painter Mark Bryan is in therapy. Art therapy, that is. And he's been in session ever since the 2016 presidential election.

"I went to bed and Hillary Clinton was ahead," Bryan remembered of Election Day. "I woke up and Donald Trump was elected president."

Bryan's latest exhibit, Fake News, lets viewers into his artistic processing of the Trump era with a biting collection of 25 oil paintings. Fake News is on display at the San Luis Obispo Museum of Art (SLOMA) through April 26. 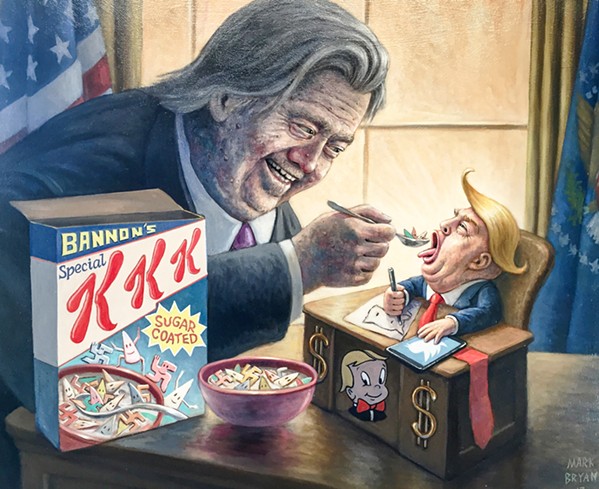 "I go after people I don't like. They get the satirical treatment," Bryan explained with a laugh. "What is so disturbing to me is how many people are down with Trump. I was completely blown away that Trump won."

Art has turned Bryan, a self-described introvert, into an extrovert through the satirical oil paintings he creates. He expresses his emotions and opinions on canvas, whether it be politics, religion, or whatever is lurking in his subconscious mind.

Walking into SLOMA, I am immediately taken in by Bryan's 2017 painting, Feeding the Baby, which depicts Trump with his former strategist Steve Bannon. The painting shows a caricature of a smiling Bannon as he spoon-feeds Trump a bite of Bannon's Special KKK Cereal, with sugar-coated KKK hood-shaped marshmallows. The president, also a caricature, is sitting at a baby-sized desk, on top of a larger desk, in the Oval Office of the White House. On Trump's little desk, decorated with dollar signs and a 1950s Richie Rich comic emblem, sits a Hello Kitty drawing he is working on and an electronic tablet open to Twitter.

Bryan explained that the cat drawing is a reference to the president's famed recording in which he used vulgar terms to describe grabbing women.

Another of Bryan's attention-grabbing pieces is Foreverland, a 2019 religious commentary piece that's particularly intriguing. In the painting, Jesus is the featured amusement park ride, with angels circling above his head. Next to Jesus, there is a ticket booth for those who want to buy their way into heaven. If the Jesus ride isn't for them, there are other rides: an Islamic rollercoaster or a Buddhist Ferris wheel to take a spin on. For those who know they have been bad and are ready to feel the heat, the ride to hell is also offered.

Bryan said he comes up with ideas for his paintings by thinking about the "big picture," not just one idea. Then he figures out how to make a visual story of what's on his mind. He calls the end result a "slice of time."

Growing up in LA in the 1950s, Bryan's mother introduced him to the arts through her own arts and crafts projects and by taking him to museums. He was shy and introverted, and drawing became a vehicle to create his own reality.

After college, Bryan returned to SLO County and started work as a contractor, designing and building custom homes, while raising his two kids. In 1977, he built a custom home for his family in Corbett Canyon, where he still lives today. Three times a week, he surfs, usually in Pismo Beach or Morro Bay.

Since 2000, Bryan has worked solely as a professional artist. In addition to his political and religious art, Bryan also enjoys creating pop surrealism pieces because they come from his subconscious imagination. Painting the current president, which he's done six times in three years, is getting a bit old, he said.

"I don't want to paint Trump all the time," Bryan said. Δ