Art that says something

A group exhibition at Linnaea's Café explores the power of words

When I drove by Linnaea’s Café on Sept. 2 for the opening reception of “Mincing Words,” the place looked packed. I just knew that it was going to be the art party to end all art parties, a veritable whirlwind of wine, art, laughter, and tears.

But by the time I found a parking space and walked my ass back there, it was mostly empty.

“Oh no, you’re here!” said Lena Rushing, the show’s organizer and lead feelings-hurter. “I swear there were people here a minute ago. They’ve been coming in waves.”

I used the down time to peruse the paintings, which were varied, interesting, and unique. Rushing asked more than 20 local artists to create pieces that included or were inspired by text. Some used lyrics or poems, others common phrases. One explored the power a child experiences when first learning to read and write.

A few had words emblazoned clearly on the painting, like a caption, but most of the artists played with the idea of hiding or scattering the words throughout the piece, creating puzzles of sorts. The result is art that demands attention. You know there’s more to it than a pretty image, but you have to take the time to decipher it and then reflect on how it relates to the picture, style, and colors.

They’re all very different and on display at Linnaea’s throughout September, so you should grab a cup of coffee and spend some time with them yourself. That way I can skip trying to describe them and get back to the bash.

Rushing announced that she had a new supply of wine cups, which sounded like a good excuse to go get some. Ever the epitome of class, Rushing handed me a present bag loaded with beer and even a locket necklace for my wife. Did I mention how Rushing is the most talented painter this side of Picasso and beautiful to boot? 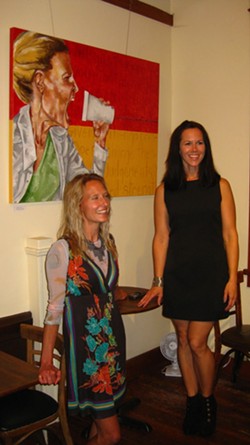 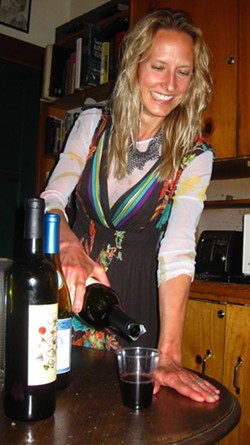 Moving on, I chatted with Sara Legrady, who sold an elegant and colorful self portrait that included the phrase “I want to be what you wish I was” for just $55, a total steal.

“I wanted to make heartbreak beautiful,” she said. “I used my camera phone to capture the pose and painted it from that. I’m my only model, much cheaper than a real one.”

It sounds like somebody needs to start charging more for her art.

Then, another wave of people rolled in, and Rushing made sure I noticed.

“I told you there’d be people,” she said.

“So banging,” she said. “We’re hemorrhaging art over here.”

I rode that wave with Steve Plowman, who loved the diversity of the show but wasn’t too crazy about the theme.

“An image shouldn’t necessarily need words to describe it,” he said. “It should be able to stand on its own.” 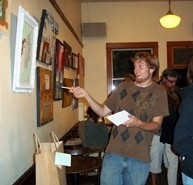 Next, I overheard a lively discussion on the mating habits and migratory patterns of Neanderthals.

I was sure that this anthropological conversation was inspired by the art and attempted to trace the roots of language in human development.

“Nope. It started with bird poop,” said Richard Frankel. His biologist buddy was working on tracing the DNA of E. coli, which got them talking about human genetics.

Before the evening was over, I ran into Melinda Forbes, who had made a dress for the show and stitched a phrase from a forgotten journal on the front, and artist Josephine Crawford, winner of this week’s “My Favorite Person” award.

Calendar Editor Nick Powell still thinks the pen is mightier than the paint brush. He also has an email: npowell@newtimesslo.com.