Modern dance company Variable Velocity returns with Inside Out

Dancers are rolling heavily across the floor like seals making their way toward the ocean. They writhe over one another organically, seemingly unaware of the concept of others. But gradually, as rhythmic drumming begins to sound, they find their feet. It’s a dance with a primitive, animal heart, and it’s the namesake of modern dance company Variable Velocity’s latest performance, Inside Out. 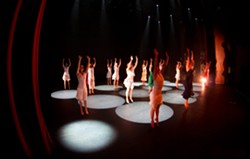 The company, now in its 11th year, often uses abstract or philosophical concepts as the unifying thread for its yearly performances. The group’s 2010 showcase, The Treasure of Presence, emphasized the need for awareness of the present in daily life, incorporating improvisation on the part of the dancer and audience participation as a way for both parties to maintain mental presence. Back in 2005, Heaven is in Your Mind explored the possible meanings of heaven, both as a mental state and a physical place.

And as in past years, directors Diana Stanton and Jude Clark Warnisher have taken this year’s theme, Inside Out, in several different directions. The theme could represent thoughts becoming actions, or, as Stanton puts it, “giving in to the idea that humans are bigger and broader than our lives indicate.”

Stanton’s “Inside Out” is followed by Clark Warnisher’s “Intimately Distant,” a critique on the alienating effects of technology. Actually, “critique” makes the piece sound more literal, more specific than it is. Obvious messages have never been either choreographer’s style. In “Intimately Distant,” dancers encircle one another, each one leaning away from the other, with the back of a hand pressed to the side of his or her head. It’s a gesture that, delivered in such an abstract form, calls to mind a distracted person on a phone—but could be representative of something else entirely.

The piece, says Clark Warnisher, is just as much about “the space between us, and how we do or don’t deal with it.”

The music of Johann Sebastian Bach, Bela Bartok, and Tool accompanies the dance, and the piece begins and ends with the sounds of distant chatter.

“Intimately Distant” is followed by Lauren Cherludi’s solo “My Love Letter, Waits,” a piece Cherludi created as a love letter to Tom Waits.

Stanton is also assistant professor of dance at Cal Poly and directs the university’s Orchesis Dance Company. Her piece “Torque” was first seen in Orchesis’ winter production, Immersion, but here it’s been pared down, employing far fewer dancers. The piece imagines dancers as conduits of rotational energy—or as the embodiment of energy itself.

At first, we hear wordless, siren-like singing to the reverberating boing of a jaw harp. Dancers, inverted, rest on their shoulders with their legs straight in the air like tuning forks. As the pace of the music quickens, the dance becomes highly athletic, the dancers’ movements sharp and angular: They are turbines, cogs, wheels. Then, as if caught by some mysterious tide, they become limp, and are pulled hither and thither by invisible forces.

A short film by Clark Warnisher called Line In/Line Out follows. While she is reticent to give too much away, she divulges that the film will feature animated drawings and describes it as the “connective tissue” of the performance.

While wary of the isolating effects of technology, Clark Warnisher says, she thoroughly embraces technology that supports the company’s artistic objectives and hopes to incorporate more multimedia effects into future Variable Velocity performances.

For the finale in particular, a piece called “We Come, We Go”—which Stanton refers to as “the white piece”—stage lighting will be of utmost importance to achieve the work’s intended mysterious, near-spiritual effect. The piece will begin, she says, with three cones of white light, into which a single hand will become visible, then a face, playfully blowing a bit of dust into the light from the secrecy of the darkness.

Arts Editor Anna Weltner works from the secrecy of a fluorescent office. Send sunlight to aweltner@newtimesslo.com