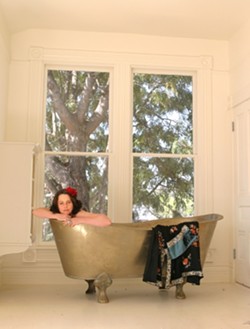 #As a town that draws visitors to a wild variety of art venues, art cafÃ©s, and art festivals, it's about time San Luis Obispo offered those discerning tourists art-themed lodging where they could enjoy small-town hospitality and celebrate the creative spirit in the idyllic setting of a historic Victorian manor.

The Sanitarium at 1716 Osos St., in the old railroad district of San Luis Obispo, is preparing to do exactly that. Scheduled to open in early May, the inspirational spa and bed & breakfast is the magnum opus of proprietor Suzi Kyle and her three inventive colleagues - Tracy Taylor, Sonya Lea, and Heidi Harmon.

In spite of everything that this area has to offer, Harmon describes this unique resort as a destination point in and of itself. "This is a place to come to just to come to," she said.

In addition to filling the amazing 3,600-square-foot house with art from themselves and other local artists, the women plan to make the lobby into an open studio where guests can create than own masterpieces. The B&B will also offer workshops on painting, yoga, and screenplay writing led by creative professionals from near and far.

#Steeped in history, the Sanitarium is itself something of an objet d'art. Built in the 1880s in the tradition of Victorian elegance - all immaculately preserved or restored by its new owners - the commodious home served as a sanitarium, a retreat for patients with non-contagious diseases or recovering from minor operations. A newspaper clipping from the turn of the century features an advertisement soliciting doctors to work in the facility.

In the mid-1980s, Kyle, who graduated from Cal Poly in the '70s, and her husband Mike, purchased the aging relic. They rented the building out as a sorority house, and in the '90s that became a fraternity house. The frat boys helped out greatly with the upkeep, Kyle said, but the major renovations started about two years ago.

As operators of the bed & breakfast, the four women will act as midwives in the rebirth of the sanitarium. By converting the historic manse into a comforting retreat, the ladies are doing with the building just what they intend to do for their guests: restore them in both body and spirit. Originally a site for mental and physical recovery, the Sanitarium's steam baths, yoga classes and creative workshops will uphold the facility's curative character. 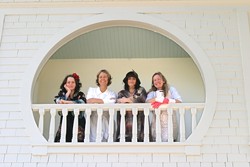 #The staff is having some fun with that healing heritage, too, dressing in nurse uniforms and preserving what they call "friendly institutional hospital flair." Although well decorated with local art, the house is painted almost entirely in white, both inside and out, for a sense of cleanliness bordering on sterility. And an annex behind the main house - added to enhance the B&B's economic viability - has been dubbed the "outpatient ward."

For a deeper understanding of the building's spiritual past, the women invited a Cherokee medicine woman, Grandmother Dreaming Bear, to give the house a reading and a blessing. Dreaming Bear christened it the Mother of Hidden Waters and told the women it would be inhabited by turtles and shiny girls.

The four ladies will provide the art that will initially decorate the walls. They will also prepare the meals, conduct the housekeeping, and ensure the overall hospitality.

A bale of turtles will inhabit a terraced pond on the south side of the house, the cornerstone of an elaborate landscaping project. An ornate driveway lined with queen palms leads to some parking, the outpatient ward, and a lush garden of leafy sub-tropicals, punctuated by bougainvillea and birds-of-paradise. Finally, a grove of citrus trees in the front yard completes the scene.

#As for the hidden water, each room is equipped with a plush Moroccan bathtub and a beautifully tiled steam shower. The building crew has spent three months cutting and polishing the tiles. The hotel will provide every guest with a complete package of spa essentials, including all handmade soaps, lotions, and massage oils from local artist Nancy Houston.

The spacious but sparsely furnished rooms - free of televisions and telephones - will also include a fireplace and a private or semi-private deck, with sweeping views of the old railroad district and the surrounding hills. And each has been cleverly named, to reinforce the Sanitarium's uniquely imaginative theme.

Whether you spend the night in the Euphoriasm, the Tranquilibrium, or the Hydrolucinogen, the healing properties of art therapy and steam baths are sure to deliver an unforgettable respite from the insanity of another week in the office cubicle.

To make reservations or for more info, call the Sanitarium at 544-4124.

A history (and a tour) of the healing house

The Hageman Sanitarium was built in the 1880s as one of the area's first private hospitals. A local machinist named J.C. Waterbury supplied the $5,000 construction cost and his wife, a nurse, was one of the sanitarium's first employees.

By the start of the World War II, the boarding house's clients were exclusively women. Over the following decades, the home would serve as office space, a fraternity house, and a sorority house.

Today, the building's distinct look has earned it a footnote in the city's architectural history. One author, Janet Penn Frank, used it as an example of a "neo-colonial structure" in her "San Luis Obispo: A History."

To find out more about the building, join San Luis Obispo's fifth annual architecture tour, "Secrets of Historic Buildings," from 1-5 p.m. on April 24. The tour visits six buildings in the downtown area - including the Hageman Sanitarium - with interesting histories or owners. Tickets are $10 and are available at the Chamber of Commerce or the SLO Historical Society. Info: Joy Hudson, 543-8338.