The growing awareness of sexual assault, especially sexual assault that occurs on college campuses, is an alienating problem. The uncomfortable nature of the conversations surrounding this topic can make it difficult for people to willingly participate and engage in dialogues.

But Cal Poly SAFER is boldly plunging ahead in trying to include everyone in this issue. Danny Lynch, a SAFER staff member, is putting on the exhibit Manifest: A Male Movement Against Gender Based Violence this May. The exhibit will feature portraits of male students at Cal Poly who consider themselves allies of SAFER, and any other organization working to prevent these crimes. 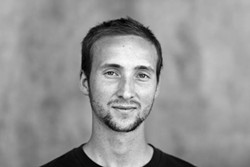 “I joined SAFER in August,” Lynch said. “I was always innately interested in the issues of sexism and the problems of objectifying women. I noticed that there was this imbalance of power, and I knew that there was something wrong, but I just didn’t know what to call it. And after joining SAFER, I’ve really been able to learn a lot more about this, and put a name to all the different forms of gender-based violence.”

According to the European Institute for Gender Equality, gender-based violence is violence that is directed against a person on the basis of their sex. It also includes violence directed at people who don’t conform to society’s normalized gender roles, such as transgender people. The Rape, Abuse & Incest National Network (RAINN) defines gender-based violence as an umbrella term that incorporates any kind of abuse, including sexual assault, which refers to sexual contact or behavior that occurs without the explicit consent of the victim.

In response to the lack of men getting involved or speaking out against gender-based violence, Lynch began organizing Manifest. His hope was to get an exhibit together that would challenge people—especially men—to take a hard look at gender roles and the effect they have on society. He started by just approaching men on Cal Poly’s campus and talking to them about this issue, what his goal was, and whether or not they were interested in being a part of it. Unfortunately, Lynch found this was easier said than done: The majority of the guys he talked with just weren’t interested, especially if he approached a group of them. Eventually, he drummed up enough volunteers to get 120 black-and-white portraits of male students who declared themselves as allies against gender-based violence.

“I think that this is just a really polarizing issue for a lot of men,” Lynch said. “They’ve turned their backs to this issue, and I think the problem is that the majority of them are thinking, ‘Well, I’m not a perpetrator; I don’t go out and harass women or rape them. It’s not my problem.’ But a lot of men need to realize that even though you aren’t contributing the violence, maybe something in your attitudes or beliefs are contributing. I mean, even I still feel uncomfortable with the social pressures. I can only imagine what 19- or 20-year-old must feel thinking about all of this.”

Lynch is cognizant of the criticisms about taking a male-centric approach toward something that affects higher numbers of women, but his goal isn’t to erase the problems that victims of gender-based violence face. Rather, he wants to show that men can take a stand and help out, too.

“This is just one aspect of gender-based violence,” Lynch said. “There’s so much more. And I’m not trying to take away from anyone else’s experience. It’s more that men need to be involved in fighting this.”

The Home Instead Senior Care Foundation in Grover Beach is holding a Sunday Dinner Pledge program through July 31. For each person who commits to scheduling family dinners with senior loved ones, the foundation will donate $1 to Meals on Wheels America to ensure that other seniors receive quality meals. For more information visit sundaydinnerpledge.com or call 473-5781.