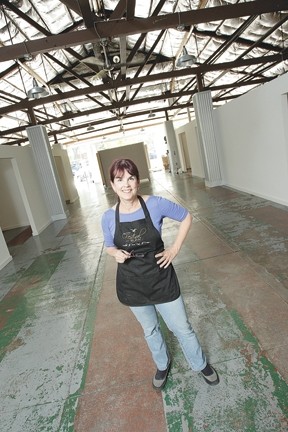 The Paso Robles Visitors and Conference Bureau has a lot to boast about these days, from its status as a leg of February’s Tour of California (re-routed from San Luis Obispo) to the approach of the first Central Coast Shakespeare Festival season in the company’s new Paso Robles digs (re-routed from Avila Beach). The newest feather in the North County hub’s proverbial cap is Studios on the Park, an art center several years in the making and decades in the dreaming, with some determined personalities driving the effort.

The space the studios occupy, sidled up next to the Crooked Kilt and overlooking the gazebo in the park at 1130 Pine Street, was once called Pioneer Auto Parts (between 1960 and 2003). And before that, dating as far back as the ’30s, it was an automobile dealership. The effort to transform the aging space into a home for artists was begun by Anne Laddon, a painter with the fortitude to move mountains, if she took it into her head to do so. Having participated in the renovation of an abandoned torpedo factory in Alexandria, Virginia into an art center during the early ’70s, Laddon had been looking for a similar opportunity in Paso Robles ever since. For decades she had been pestering friends and acquaintances about available venues and buildings. Newlin Hastings, a commercial real estate owner and developer and board member of Studios on the Park, recalls that during his first meeting with Laddon 18 years ago, she expressed interest in a granary building that he owned on Railroad Street.

Nearly two decades later, he found himself assisting Laddon with the initial lease agreements with the building’s owner, who would eventually lease the 9,600 square foot space to Laddon for a period of 55 years.

“I didn’t think anyone realized what this thing could be,” said Hastings. “I think everyone viewed it as a blight on downtown. People thought a Barnes and Noble or something would take that away. The owner, to his credit, was pre-disposed to wait until something more significant for the community came his way.”

Laddon’s original vision has undergone a beating along the way, but the space that opens on May 15 boasts 20 juried artists and two apprentices sharing nine studio spaces, with a kitchen in the back and a larger space for workshops with community members. That alone required more than $200,000 worth of construction work over a whirlwind two-month period. The original plan involved a three-story, 18,000 square foot space with a $3 million price tag, a vision that receded as the recession hit.

There have also been a few dozen unexpected detours along the way, from the city’s rejection of architectural plans and declaration that the space was a historic site to the happy discovery that the building was not classified as unreinforced masonry.

To help shape the center’s future, Laddon recruited a board of directors comprised of individuals with very specific, and beneficial, areas of expertise. Besides Hastings, Laddon welcomed a community activist, a winery owner, the president of the Paso Robles Art Association (which previously lacked a gallery space), a contractor, and a publicity agent, 10 people in all. She also sought the help of her daughter, Sasha Irving, fresh off an international studies degree at Georgetown, to work as strategic campaign manager and secretary. With completely disparate skill sets, Irving and Laddon work well together, the daughter focusing on specific details while her mother maintains a watch on the big picture. And when the space opens, Irving assumes the task of running the front desk and overseeing the facility’s day-to-day operations from behind the hood of a Hudson Hornet, transformed into a desk as a nod to the building’s past history. Not all of the board members were fully aware of the responsibilities they had undertaken, but if the lessons were trial by fire, they learned quickly. 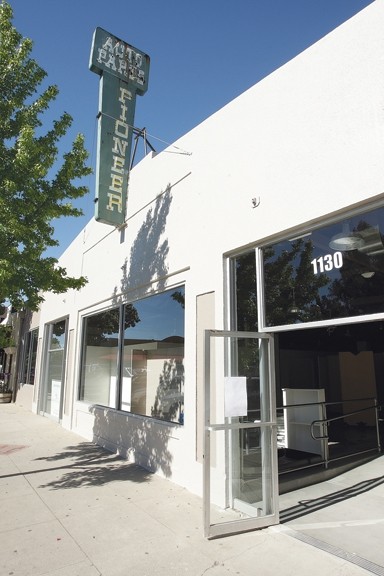 To give her board a better understanding of what they were working toward, Laddon flew Phyllis Frank and Elaine Bateman out to Virginia to pay a visit to the Torpedo Factory Art Center.

Laddon hand-selected her resident artists as carefully as her board members. A five-person jury selected the 20 inaugural artists, photographers, jewelers, sculptors, ceramicists, and painters; she’s still looking for a fiber artist. Their key criterion for potential artists was professionalism. Laddon has emphasized that the center is not a mom and pop operation; artists must be friendly as artistic ambassadors, but there’s nothing down-home about the space with the possible exception of the fact that the studios do not have doors, a single bohemian concession. Artists sign a month-to-month lease and are expected to work in their studio during the 24 hours each week that the space is open. After all, the idea behind the center is that the public can view a piece at every phase of its formation.

But, however many ideas Laddon may have for her space, she knows that she can’t predict every potential twist and turn her project will take. As New Mexico’s motto states, “crescit eundo,” it grows as it goes, and evolution will undeniably bring change. Some artists might not get along with their studio mate, and the studio board still has their sights set on the tri-level structure as a long-term goal. 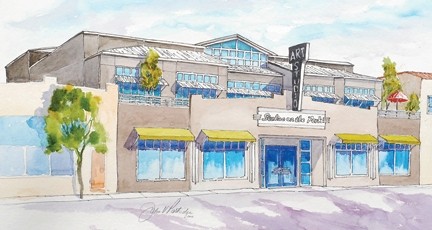 To help publicize the studios and plug the empty Memorial Day weekend schedule after the car show was cancelled, the city asked Laddon and her trusty board to organize the Paso Robles Festival of the Arts on May 23. In a mere matter of months, a creative team, with Irving at the helm, had conjured an event featuring 60 artists, a plein air quick-draw and auction, workshops, and live music. A percentage of the day’s sales will go to Studios on the Park and event attendance is completely free. The endeavor is a particular coup for Irving who is well aware that few people fall out of college and into an opportunity to coordinate a city-sponsored festival. But she’s worked hard for her share in the art center’s vision, and will in all likeliness be the person responsible for organizing the capital funds campaign when the board, and economy, is prepared for that big step.

“One thing you learn, you’ve got to be flexible,” said Irving. But for her mother, the lesson behind the studios and art festival is quite different.

“Be careful what you dream up,” Laddon laughed.