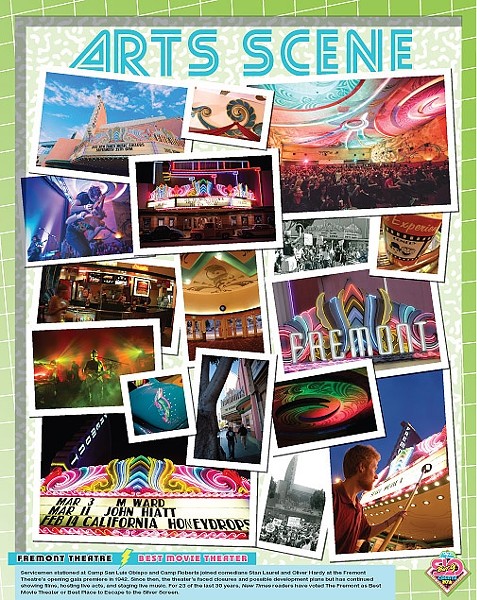 Meghan Hollister has captured the SLO community for nine years. She studied photography at Cal Poly and grew up in Southeast Asia. “I love traveling and always have my camera,” she said. “Even a place I’ve seen a million times changes with the seasons and reveals something new.” Her first camera was a Nikon SLR film camera. “I still whip out my film cameras, as the results have a timeless look.” She shoots special events and local businesses, but her favorite subjects are people. “I love meeting different people and making connections. The SLO community is great, and I’m excited and super grateful for this accolade!”

Colorful musicians burst out of Colleen Gnos’ current paintings, but the fine artist, muralist, and sculptor has explored many things. In her 20s, she went from UC Santa Cruz to Italy’s L’Accademia di Belle Arti, an art school founded by some guy named Michelangelo. She’s designed the set for the La Jolla Playhouse’s production of Tartuffe and more than 90 wine labels for Kelsey See Canyon Vineyards. “I have a solo show at Steynberg Gallery in June, I’m this year’s featured artist for the Live Oak Music Festival, and I’ll be painting artwork on the lifeguard towers in Avila beach to be completed by November,” Gnos added.

Known as SLOMA, this organization’s goal is to provide and promote diverse visual arts experiences for people of all ages and backgrounds. With a rotating series of art exhibits in three galleries; art classes for all ages and skill levels; and special events such as concerts, lectures, films, and discussion, SLOMA is the place to be for artists, patrons, and art lovers. “Adults seeking some peace and quiet, kids in art camps up to their elbows in art materials, grown-ups taking workshops to improve their skills and nurture their passion—it’s all here on any given day. The place is jumping! And engaging!” Executive Director Karen Kile said.

When you put permanent art on your body, you want to love it forever. It’s imperative to find an artist whose style you love and who you can trust. That’s the kind of trust Gary Ellsworth, owner of Sink or Swim Tattoo, instills in his clients. “When I got into tattooing, it was purely as an artistic endeavor,” Ellsworth said. “It eventually became a means to support myself and my family through a creative outlet.” Next was creating a supportive and inspiring shop for other like-minded tattoo artists. “I owe a debt of gratitude to the other artists I work with that constantly push me to improve.”

The historic Fremont Theatre opened its doors for the first time in 1942. It’s among the last of architect S. Charles Lee’s “Streamline Moderne” designs. Popular among the Camp San Luis troops on the eve of World War II and frequented by Hollywood’s elite, it was saved by public outcry when developers lobbied to raze the structure. In recent years it’s found a second life as a live theater, hosting popular music acts such as Los Lobos, Jeff Bridges, and Adam Ant, not to mention comics such as Russell Brand. Its interior grandeur, majestic marque, and old-school vibe makes it a perpetual favorite. Here’s to the next 74 years!

Runner up: The Palm Theatre

“We are about to embark on our 70th season!” enthused Communications and Development Director Patty Thayer. It opens with The Jungle Book. Season 70 also includes American classic Our Town, a gala presentation of the musical Guys and Dolls, and family favorite Oliver! “Most of our actors and crew are local. We’re amazed by how much talent there is in our local community,” Thayer said. “The reason we can do what we do is the 350 volunteers on and off stage who make live theater happen here.” She added, “We are thrilled to once again receive this honor.”

Runner up: The Great American Melodrama

Owners Leslie Baumberger, Stacy Millard, and Zheila Pouraghabagher all have a passion for dance. Full of Creative Original Raw Energy they started CORE and began “inspiring the community to dance.” “We’re so grateful to the community for their support,” Baumberger said. “We offer lessons and performing opportunities for ages 2 to 99! Everyone is welcome!” The performing company has 30 members, has traveled all over California and Europe, and puts on three to four performances locally. “We mix dance styles from pointe to classical jazz to hip-hop,” Baumberger said. “Our philosophy is dance training is life training. What you learn here you’ll carry throughout your life.”

Louie Ortega is best known nationally and internationally as a sideman (guitar and vocals) for Sir Douglas Quintet, and the Texas Tornados, the latter of which won a Grammy in 1990 for Ortega’s performance and translation of “Soy de San Luis” on their debut album. Locally, he’s known as a solo performer and essential member of acts such as CC Riders, Rio Salinas, and the band Ortega with his daughter Talia Ortega. He’s always got things cooking both locally and beyond. “I’d like thank everybody for their support, not only support for my music but for all the live music in the county,” said a grateful Ortega.

There’s a view from every seat in this comfortable amphitheater. In just three years after opening, the Vina Robles venue took center stage as one of the largest outdoor entertainment areas on the Central Coast. Paired with its own winery that enables easy access to fine wine and cuisine, it’s a sweet spot to spend a Friday evening watching the summer sun set over some tunes. Many greats, from Weezer to Ringo Starr, have graced the stage singing under the starlit sky. Concert season runs until October, which leaves plenty of time for concertgoers to find their way to Paso Robles.

The long-running farmers’ market has new plans to freshen up the market-turned-street-fair. It’s known as a hot spot for locals and passers-through to simultaneously shop for produce, eat barbecued ribs, and see some local entertainment, and the SLO Downtown Association has been busy scheming new ways to improve the ever-popular event. Those plans include free WiFi, reduced foot-traffic congestion, and an expanded market sections on Chorro Street. They’re also working to implement acceptance of the new electronically-based food stamp system for fresh produce, and you might even see beer and wine tasting come to the market later this summer.

Runner up: Concerts in the Plaza, SLO