After loading a wine bottler into the back of his vehicle on a recent Friday, Christopher Taranto headed over to a friend's winery to help make room for the upcoming vintage.

"For our organization and for the Paso Robles AVA [American Viticulture Area], the boundaries are fairly tight, and the critical mass of brands that exists within those boundaries come together in a fairly supportive manner," he said. "There's a serious understanding that the rising tide lifts all boats in Paso Robles." 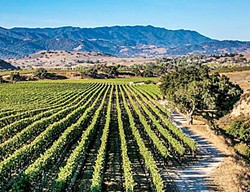 With a membership that's at least 500 strong, and includes wineries, grape growers, hospitality industry members, and those that support the wine industry, the Wine Alliance is a marketing arm for the wine region. There are other AVAs in North County, but they fall under the larger umbrella of the Paso AVA. The alliance, Taranto said, provides marketing for the whole industry, both in SLO County and outside the region; brings in trade to the area, such as sommeliers and restaurateurs, so they can learn about Paso wines; and it also provides educational opportunities to its members, such as holding forklift certification courses or hospitality boot camps.

The organization's budget for this year is about $1.3 million, and it raises that through a membership structure that the alliance tweaked in 2007, due in part to the fact that festivals weren't bringing in the revenue that they once did.

"We do have a lot of festivals that do help promote the region and provide a leverage point for reaching the consumer," Taranto said. "We no longer use those as a base for revenue because we have buy-in from our members."

"Historically, I would say that Santa Barbara County's vintners' ambitions have outpaced their funding. We have a wine region that's unique and successful in that the wines are elegant and win a lot of awards. But we're not as well known as we might be if the Vintners had the funding," Vintners Association Chief Executive Officer Laslett said. "Forty years ago, the Vintners were able to raise quite a bit of money because they were the only [event] game in town. But if you look at the festivals now, you've got so many to choose from. ... It's a very crowded space."

California's Property and Business Improvement District Law of 1994 allows business districts to fund business-related improvements, maintenance, and economic growth by collecting an assessment from the businesses that would benefit from the district's formation. It's most often used to increase tourism in downtown areas and cities with an assessment on hotel stays. Although there are a couple of other wine improvement districts proposed in California, including in Sonoma's Winegrowers of Dry Creek Valley, it would be the first of its kind for the wine industry if it's successful. 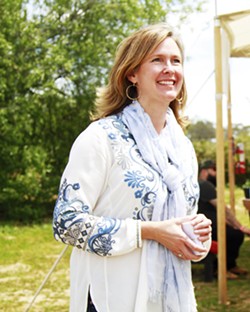 While areas like Sonoma and Napa have successful trade auctions that help fund their respective associations, the Paso Wine Alliance, which Laslett said the Santa Barbara Vintners is compared to the most, has a much larger membership than the Vintners Association's 70 to 80 members. And while Santa Barbara County brings in around 800,000 wine tourists annually, the Paso area alone has about 1.6 million, Laslett told supervisors.

"If you look at any of the wine regions, they're different, and so this is one of the things that you really have to consider when you look at the money that an association is able to raise for itself," Laslett told New Times. "It's very hard to compare wine regions up and down California. Each of them has their own flavor and culture."

The association has looked at myriad ways to fund itself, including sponsorships and increased membership, with which the Vintners have so far been unsuccessful, and creating a grape commission. A grape commission, which would tax grapes, needs to be done through the California Department of Food and Agriculture by district. That district also includes Ventura and San Luis Obispo counties, and the Vintners Association is still interested in pursuing that, but it would take collaboration between the three counties and the state, so Laslett said the association is pursuing the BID first.

"Santa Barbara County has never found particular success in raising funding through its wine association," Laslett told supervisors on Aug. 18. "What makes them succeed as a wine industry is also what prohibits them from working together."

These challenges include a geography that breeds the wide variety of grapes and wines produced in the county, which has eight different official AVAs and produces wines from giant Bordeaux varietals to softer pinots and chardonnays at a range of price points and production sizes.

Some area winemakers—who aren't Vintners Association members—spoke out at the Aug. 18 meeting and have started a group in opposition: The Santa Barbara Wine Country Coalition. The coalition currently has about 50 wineries signed on.

A business improvement district needs a majority (more than 50 percent) of the businesses that will be assessed to sign on in order to move forward. Opponents say that the association doesn't have a majority of Santa Barbara County's estimated 270 wineries supporting the proposal, while Laslett says she believes they do.

"Any BID in its formation experiences opposition," Laslett said. "What I have heard from other leaders of BIDs is that once you form it, the benefits become overwhelmingly obvious." "Obviously people are pushing their agenda forward," Griffith said. "It's not the sense of camaraderie that we really need in this county, to come together and to get engagement."

She's spearheading a resolution in opposition to the proposal for the Lompoc City Council to pass, which would mean that if the Wine Preserve assessment becomes a reality, Lompoc wineries won't have to participate, Griffith said. So far, she has about 20 wineries signed on in support.

The Vintners Association has always been an organization with controversy, Griffith said, due to the variety of business models in the county, which include a lot of small wineries and a lot of big wineries; people growing grapes and selling those, making wine and selling it, or doing both.

"When you have a lot of different business models out there, it creates, you know, a lot of different approaches to what makes really sound business decisions," Griffith said. "This wine BID has brought more collaboration than I've seen in 19 years, because there are so many of us who don't want this. ... Maybe at the end of the day, this will bring us all together, help us realize that we need a new vision for the future."

Doug Margerum, a Vintners Association member and owner of Margerum Wine Company and Barden, said that he believes the diversity of Santa Barbara County wines, winemakers, and grapes is its greatest strength. He said they don't have a good way of marketing Santa Barbara County to the rest of the world, and it's one of the highest quality regions for grapes and wines in California. So he supports the wine BID creation because, at the moment, it's the best proposal on the table to promote the region.

"Every single one of the people who are against this aren't members of the Vintners Association, so they've taken themselves out of the equation," he said, adding that people don't want to pay what they perceive to be a tax. But it's just 30 cents on a $30 bottle of wine. He encourages anyone with a better proposal to come forward with it.

"For me, I see this as an innovative new idea to do something that no one else has done. It's a new idea. It's a great idea," Margerum said. "It will raise a tremendous amount of money to promote our cause." Δ

Editor Camillia Lanham is into all makes and models of Central Coast wines. Send food and drink tips to clanham@newtimesslo.com.