To learn more about the SLO ACCEPTance Project, visit queercares.com. Therapists in the area who are interested in participating in the training can email queercares@gmail.com.

Three in five LGB teens were made fun of, insulted, or called names; two in five were shoved or hit.

One in two transgender students disagreed with the statement: "I am happy to be at this school."

The 2017 California Healthy Kids Survey (CHKS)—taken biennially by fifth, seventh, ninth, and 11th graders—presents a sobering picture of life as a young LGBTQ person in SLO County. But it gets even worse.

On almost every indicator in the survey, youth are worse off in 2017 than they were in 2015 and 2013. Among SLO County transgender students, the response rate for "seriously considering" suicide more than doubled between 2013 and 2017. Negative health experiences among lesbian, gay, and bisexual students, though not as dramatically up, are still elevated across the board, exceeding what statewide survey results show.

"Some of these are pretty shocking, and should give us pause," said John Elfers, a retired SLO County Office of Education employee and former chair of the LGBTQ ally group, Central Coast for Inclusive Schools.

"The reactions I've gotten are, 'Oh my God, we have to spread this around, it looks like things are getting worse,'" Elfers said. "There's a larger discussion [to be had]."

Why and what can be done about it is part of that larger discussion, Elfers said. The answers are complex, as responsibility lies with parents, schools, peers, health care systems, and beyond. One Cal Poly professor is hoping a new, innovative training program that launches this fall will help equip therapists across the county to more effectively serve the LGBTQ community.

Dr. Jay Bettergarcia, a psychology professor at Cal Poly, has been tracking the local health data on LGBTQ youth over the years and said they were disheartened to see the latest survey results.

"The numbers speak for themselves," Bettergarcia, who identifies with they, them, their pronouns, told New Times. "It was disheartening before how high the percentages were. And when these came out a couple weeks ago, it was more of the same and worse. It gives credence that we need to be doing a better job." 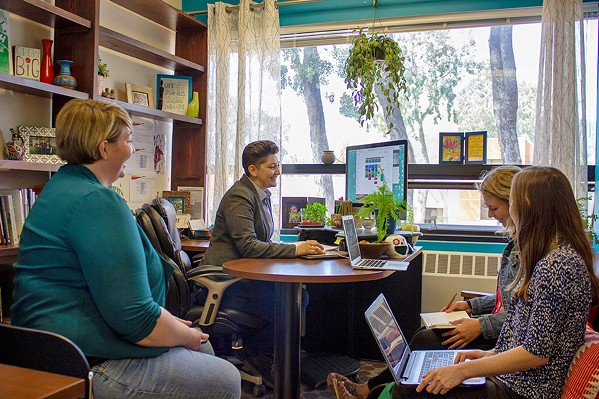 As a researcher, Bettergarcia also generates data of their own. In 2016, Bettergarcia founded QCARES, a research team that uses "community-based participatory" research to study LGBTQ mental health and wellness. The QCARES group found that one of the most pressing needs and challenges in the SLO County LGBTQ community was access to affordable and culturally competent therapy.

"We have some great therapists in the area. We don't have enough who are well trained to work with LGBT folks," Bettergarcia said. "We heard a lot of stories of folks having to travel north of our county or south of our county, or just not having any access to providers who were knowledgeable and could see them."

To help meet that need, QCARES reached out to the SLO County Behavioral Health Department about striking a partnership on a therapist training program.

"They were fantastic," Bettergarcia said. "All these fantastic people said, 'yes, we agree this is an issue. Let's figure out what we can do together.'"

Out of that, the SLO ACCEPTance Project (Affirming Cultural Competence Education and Provider Training) was born. Using $519,700 in grant funds through the Mental Health Services Act, the 2005 state proposition that taxes millionaires' income, Bettergarcia is leading a four-year program starting this fall that will deliver nine-month intensive trainings to 50 therapists in SLO County.

The trainings are completely innovative, and a huge expansion on what's historically been offered.

"We were doing a lot of little trainings," Bettergarcia said. "We'd get some stuff done, teach people some key terms, but we weren't getting anything beyond that. The idea was what if we could get people for nine months, a chunk of time."

Participants will alternate between attending trainings and consultations, where therapists will meet in small groups to discuss cases, ideas, and approaches. That training structure, which doesn't exist elsewhere, could allow therapists and teachers to delve deeper into LGBTQ competency beyond the basics, like how to use pronouns correctly.

"What we're really trying to do is help people understand the culture of LGBTQ folks," Bettergarcia said. "Part of it is key terms ... but that doesn't always get us to the awareness and skills, awareness of people's own biases—what are people's social scripts about sexuality and gender, and how does it come into a therapy room? Then, the actual skills to do a better job and to work with these folks."

Bettergarcia hopes to spread out the training to a diverse group of therapists, from school counselors to private practices, based across SLO County. The first batch of selections will be made to achieve that diverse representation, and the remainder will come at a random draw.

"The goal is making sure we have coverage in all our areas," they said, "people with a broad range of specialties, people who work for agencies, people who have private practices, people who take insurance and sliding scale."

When the SLO ACCEPTance Project is over, Bettergarcia said they hope it means better quality therapy is available for local LGBTQ youth and beyond. But they'll be tracking that. It's part of the research, to see which parts of the training work and which don't.

The important thing, Bettergarcia noted, is that the state and county are willing to invest their dollars into finding out, since therapy is an essential resource for any youth stuck in a mental health struggle.

As the Healthy Kids Survey showed, those struggles are especially visiting the LGBT community. For example: local LGBTQ students reported having missed school due to depressed or hopeless feelings nearly four times the rate of non-LGBTQ students, according to the 2017 survey. And those disparities exist across the board.

"We need to see more funds pouring into our LGBTQ youth, and that's part of what this is doing," Bettergarcia said. "This is the county pouring money into a program that will help train therapists so we can serve more of these youth in good, affirming, competent ways. Even if we have some of these youth going to a therapist, if the therapist isn't well-versed in coming out and identity, then is that youth going stay long enough to talk about how they're feeling suicidal?" Δ