Teddy Roosevelt stands, one hand tucked behind him, on Glacier Point, his almost archetypal frame—mustachioed and bespectacled, well dressed but still undeniably rugged, solidly American in his boots and hat—dwarfing the cataract tumbling into spray in the impossibly beautiful miles behind him. John Muir stands beside the president, turned at an angle, both hands clasped behind his back, his beard as feathery as Yosemite Falls descending almost a half mile into mist. 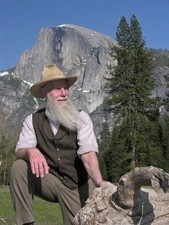 The two men—the nature-loving Tramp and the executive Roughrider—met for a four-day camping trip in 1903, commemorated in a black-and-white photo taken for the sake of history. That flashbulb-lit moment serves as the start of Lee Stetson’s play, the bulk of which—90 to 95 percent—comes from Roosevelt’s and Muir’s own mouths or pens. Stetson, who did graduate work in American studies and got into drama at the University of Hawaii, wove their words into an eloquent and humorous narrative highlighting their takes on wilderness, hunting, politics, life, and encounters with bears.

There is an emphasis on physicality in this script, from the set design—incorporating a boulder on which the men can sit—to early dialogue that paints Roosevelt as a self-proclaimed “truant schoolboy,” a man initially more interested in comparing scars—his from bullets fired in Cuba and horses rearing and the like; Muir’s from exploring ruins in his Scottish homeland or factory work—than discussing wilderness policy.

That physicality is important. Stetson—who’s played Muir since he wrote the script in the early 1980s—said that the iconic hiker can sometimes be reduced to a pontifical image, seated on a throne and dispensing wisdom. Stetson himself didn’t know much about him in his youth.

“Being an East Coast guy, Thoreau was my wilderness hero as a younger man,” he said.

(No comment on how Henry David may be similarly reduced to a philosopher strolling around a pond.)

Stetson, calling himself an “armchair environmentalist” up to that point in his life, was smitten by Muir after reading a biography of the man sent to him by a friend. The actor was enamored of Muir’s poetry, as well as his hair-raising adventures in the wilderness.

“He was a very hands-on wilderness guy: practical, scientifically oriented,” Stetson said. “He wanted to know the rock-bottom truth of things and pursued it avidly.”

While working in Yosemite as a front-desk clerk, Stetson wrote The Tramp and the Roughrider, which has since been seen by hundreds of thousands of spectators, from the awe-inspiring valley of its birth to Alaska and beyond. His fellow hiker and University of Hawaii drama student, Alan Sutterfield, now of Santa Maria, plays Roosevelt.

The play reveals Muir’s insistence that wild lands be kept wild, a passion that led to the foundation of the Sierra Club and lobbying that ultimately preserved vast swaths of forest and stone; it also showcases Roosevelt’s own passion for rugged landscapes—and the game and adventure haunting its crags and hollows.

“Both of them were stamped by the wilderness in ways that really shaped not only their opinions, but the opinions of millions of Americans who were simply not aware of how quickly we were losing both wildlife and wildlands,” Stetson said.

But while both men agreed that the Yosemite Valley was deserving of much more than a “desecrated” meadow littered with cans and reeking of a nearby hog farm, Muir’s advocacy for federal control and pristine preservation clashed with Roosevelt’s global focus and the idea that “conservation means development as much as it does protection.”

If one thing stands out in this play, aside from the beauty—and startling humor—of each man’s language, it’s the idea of time, of urgency. Roosevelt seems bound by the red tape of bureaucracy, which moves at the pace of one of Muir’s beloved glaciers.

“But there is such need for speed, Mr. President,” Muir says.

Roosevelt does admit his own disappointment in the mere 20 years that reduced buffalo to a rarity in this immense country; the shadow—or rather, lack thereof—of overhunted passenger pigeons hangs over the men.

While the outcome of their time together is apparent—it’s no spoiler to anyone who’s marveled at Half Dome or its surrounding wonders—their debate continues to this day. Preserve or use? Preserve and use?

This play’s message, too, is simple: If a big-game trophy collector, reveling in blood-flecked accounts of blasting bullets into charging bears, can find common ground with a mountain rambler who referred to the blooming petals around him as “flower people,” perhaps the various factions warring over the ever-shrinking stands of wild land in this country—and even elsewhere—can meet, can shake hands, can realize that even in the starkest black-and-white portrait, there are shades of gray to be found.

Executive Editor Ryan Miller has a teddy bear. Contact him at newtimesslo.com.