As luminous as a cereal bowl

Californian woodturners are a more diverse bunch than you might think

“A lathe is about as simple a machine as there is,” said Dewey Garrett. It is, in fact, the sundry possibilities presented by a tool so uncomplicated that makes the California Contours exhibit at the SLO Art Center topography worthy of exploration.

According to the Livermore-based woodturner, the only indispensable materials include a lathe, band saw, and wood, and the latter can be acquired just about anywhere from the Internet to a specialty store to a pile of firewood awaiting the mild onslaught of a California winter. But most woodturners find a way to complicate the process. 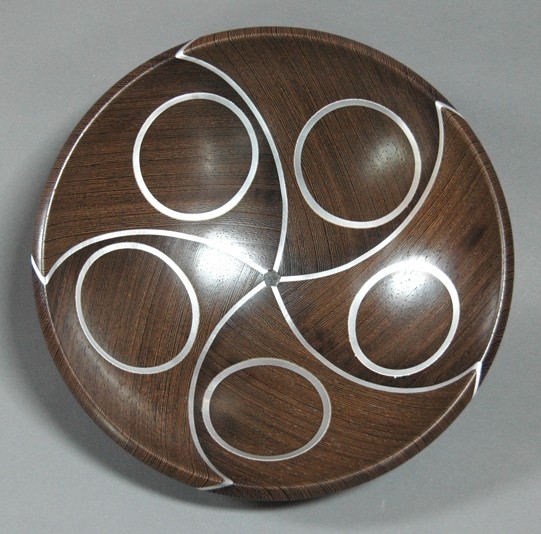 In a craft—or art form, depending upon your perspective—that dates back more than 3,000 years, the contemporary woodturner still finds a way to impart his or her own stamp. Many woodturners, particularly those who operate under the ‘ornamental’ designation, as Garrett does, take advantage of the various chucks, cutting frames, drills, and cutters that can be utilized in conjunction with a lathe. Some, like Cambria resident Everett Eiselen, devise and construct their own equipment. Garrett writes customized computer software that directs the movement of the lathe to imitate the patterns made by historical woodturning machines. As soon as he achieved his goal of duplicating vintage designs, he realized that programs could be layered to create something altogether new.

Although Garrett regards the activity as a form of artistic expression, he originally approached woodturning from a purely functional perspective. After purchasing his first house, and transitioning from an erratic existence as an apartment dweller, he needed furniture. Garrett decided to supply his furnishings himself, unsuspectingly beginning a hobby that would endure for a quarter of a century.

“It’s a very curious phenomena,” Garrett said, of the woodturning community. “The demographic is sort of largely retired men who worked with tools at some point in their life, and discovered this artistic bent.”

While tropical hardwoods are generally acknowledged to be the most eye-catching category of wood for turning purposes, Garrett frequently finds himself turning to free wood as his medium. He points to the fact that many of the more exotic woods favored by woodturners are now threatened by extinction, as an impetus for individual craftsmen to exercise responsibility when selecting materials. An ornamental turner also faces a more limited selection of woods because the materials must be harder than for plain turning.

Garrett likes to work with apricot and African blackwood—to which he is mildly allergic. But he often sculpts from a much less common, and decidedly Californian timber—palm. Tree cutters happily supply him with the material because it clutters their machines.

“When people find out you’re a woodturner, they’ll give you wood,” Garrett explained.

At the opposite end of the spectrum, Eiselen has a small list of shops—his favorite being in San Jose—where he purchases materials with which to create his vessels and self-titled screwballs. He likes working with walnut and maple. Infrequently, aluminum veins shoot through his woodwork, as is the case for his circle bowl on display at the Art Center. 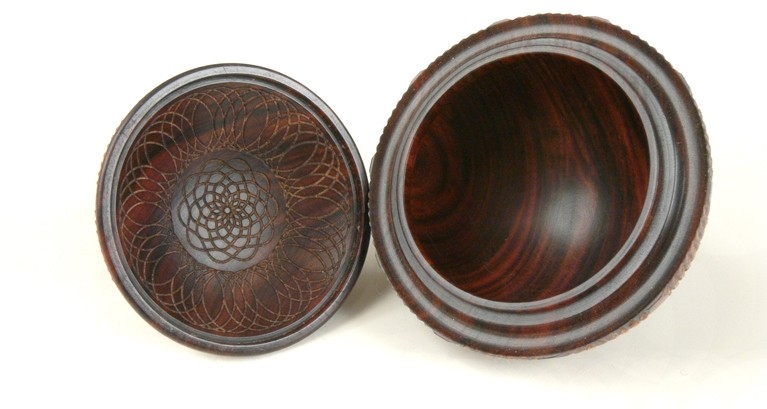 Eiselen approaches each piece not as a work of art, but as a puzzle, a feat requiring both logic and mathematical precision. And he’s got the notebooks riddled with equations and graphs to prove it.

“The math on this project was absolutely horrendous,” he said, pausing to explain the superior logic behind writing dates using the year first. “I was able to figure out what the angles were relative to the finished bowl. To do this sort of thing you have to have strong math skills. I am very fond of saying that nobody in their right mind would do what I do.”

In fact, Eiselen’s projects are so intricate that he only takes on one to two new pieces each year. His exploits in turning began in the early 90s, after he retired from IBM. While perusing a catalog for an exhibition of Teotihuacán art at the De Young Museum, he encountered a cylindrical vessel that sent his imagination into overdrive.

Unwilling to allow his imagination to be limited by what he could buy at the hardware store, Eiselen frequently invents his own equipment. One such device is fitted onto a band saw to allow him to cut at unusual angles. The idea occurred to him in a mid-western desert, on his way to view a solar eclipse in El Paso, Texas.

“As you’re driving across Arizona and New Mexico you have a lot of time to think,” Eiselen quipped.

Between creating graphs in which radii march across the horizontal plane corresponding to heights soaring into the vertical plane, and creating woodturning tools, the turning phase is generally the simplest part of Eiselen’s work.

While Eiselen hasn’t adopted the title of artist, Garrett insists that the last decade in particular has seen a shift in terms of how woodturners think of themselves.

“It’s a wonderful thing because we never were raised to, or thought of ourselves as having any artistic talent but you discover, by way of this talent, this need for expression,” he said. “For most of humankind’s existence, tools like the lathe were just functional. Function was the intent. Yet beauty evolved out of it. The cereal bowl can be beautiful.”

Arts Editor Ashley Schwellenbach weeps at the sight of a spork. Send onions to aschwellenbach@newtimesslo.com.