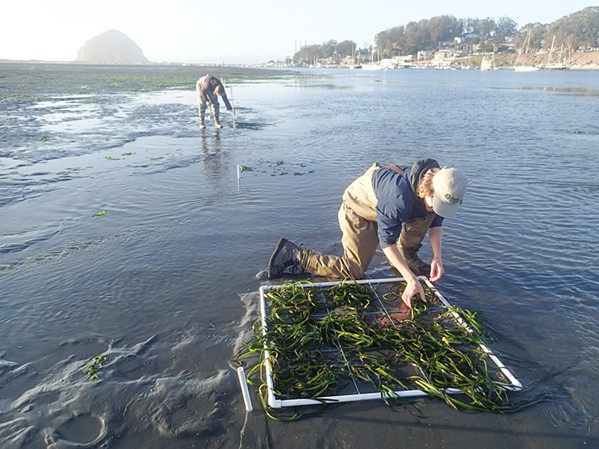 Up until 2007, abundant eelgrass growing just off the coast of Morro Bay blanketed the sea floor on the western edge of the estuary and stretched south from the Morro Bay State Park marina to the back bay. Those underwater meadows played an important role in the estuary's ecosystem, securing sediments with their root systems and providing food, shelter, and nurseries to various fish and invertebrates.

But the eelgrass nearly disappeared over the course of the next 10 years, dropping from 344 acres of coverage in 2007 to less than 15 by 2017. Early restoration efforts weren't nearly as successful as hoped, and researchers like Cal Poly physics professor Ryan Walter worried that the huge losses of seagrass would also lead to fewer fish in the area.

A recent Cal Poly study came to another conclusion.

"The relatively sudden and near complete collapse of eelgrass in Morro Bay has not only changed fish populations, but it has also resulted in substantial changes to estuary physics and geomorphology," Walter said in a Cal Poly press release about the study, "Effects of Estuary-Wide Seagrass Loss on Fish Populations," which was recently published in the journal Estuaries and Coasts. Walter is one of several researchers who, led by Jennifer O'Leary, worked in conjunction with the Morro Bay National Estuary Program to find out how declines in eelgrass have impacted local fish populations.

Walter told New Times that scientists replicated trawl surveys that had been conducted in Morro Bay prior to eelgrass losses, and then compared the types and numbers of fish that were found before and after the decline. While the estuary-wide losses of seagrass didn't result in fewer fish as Walter had expected, it did lead to changes in the species most commonly found off the shores of Morro Bay.

Prior to 2007, the bay was home to mostly seagrass-loving specialist fish, like bay pipefish, which have long, thin bodies that are adapted to hide among seagrass blades. Walter said researchers are now seeing significant increases in flatfish that thrive in the less dynamic, muddy seafloor conditions that currently exist where eelgrass meadows once grew. The speckled sanddab and staghorn sculpin now dominate the bay, according to the study's findings.

"It's just sort of a nice documentation of how these species are changing," Walter said.

But that change could create problems for both species that depend on seagrass for survival and others.

"It's one of those things where the ecosystem itself is changing," he said, "and if you have a change in fish population, that has the ability to go beyond that portion of the food web."

If eelgrass doesn't recover, then the surviving patches will grow farther apart in a more fragmented distribution. This distance and patchiness of habitat may impact eelgrass specialist species by impairing their ability to move to new areas in search of food or mates. Over time this isolation could alter the genetic structure and diversity of the overall pipefish population, which Walter said could then have a cascading effect into the rest of the food chain.

As a physicist, Walter's focus is mostly on how the loss of eelgrass has changed circulation patterns and the carbonate chemistry of the water off the shores of Morro Bay. Just like trees do on land, eelgrass takes in carbon produced in the water. A decrease in eelgrass could lead to an increase in the water's carbon content, which could have impact other plant and animal species in the area, including improved conditions for species that can cause potentially harmful algae blooms.

Walter said he and other Cal Poly staff and students plan to continue their research into Morro Bay's carbonate chemistry using funding from a new federal grant. This information, he said, aids in efforts to manage and restore eelgrass largely led by the Morro Bay National Estuary Program.

Restoration Projects Manager Carolyn Geraghty said the Estuary Program has been working to bring eelgrass back to the bay since around 2014. The process is similar to gardening, according to Geraghty, but in the sea.

Most of the work happens in a tiny window each year during the spring, when the ocean's tide is at its lowest. Volunteers and staff collect buckets of eelgrass, count the shoots coming out of each plant, and then replant them either directly into other plots of sediment or attach them to anchors like sticks of bamboo and bury them in sediment. The anchors, Geraghty said, can help prevent newly planted eelgrass from being carried away by strong waves or currents.

Once the planting is completed, volunteers track the density of the new eelgrass plots. The hope, she said, is that the plants take root, continue to spread out across the seafloor, and eventually reconnect with other patches of grass to create one large meadow.

While the early attempts at planting weren't all that successful, Geraghty said recent drone-based surveys of the bay have shown promising new growth.

The 9.4 acres of seagrass left in Morro Bay in 2017 expanded to nearly 40 acres by 2019, according to Geraghty. Although she said researchers are still analyzing data from 2020, they're optimistic that the seagrass acreage continues to slowly increase. Fishermen and other frequenters of the bay continue to report seeing huge increases in grass meadows.

"So we still have a ways to go to return to prior eelgrass levels," Geraghty said.

But, she said, there's reason for hope. Δ