As the first Regenerative Organic Certified winery, Tablas Creek is committed to farming like the world depends on it

Get the big picture

Learn more information about the Regenerative Organic Alliance and who's certified by visiting regenorganic.org. Find Tablas Creek Vineyard online at tablascreek.com, over the phone at (805) 237-1231, or in person at 9339 Adelaida Road in Paso Robles (make an appointment for tastings). Learn more about their certification process on Tablas Creek's blog: tablascreek.typepad.com.

In order for wine to truly capture terroir—the French word that roughly translates to the environmental conditions in which grapes are grown—you have to look at more than just the clusters on the vines or the minerals in the soil.

Tablas Creek Vineyard has been on that quest since the beginning, according the proprietor, Jason Haas. The idea of trying to make the grapes as reflective of the place where they are grown as possible led the winery from organic farming to biodynamic farming to dry farming to regenerative farming.

"It's been kind of a series of gradual moves, each one feeling like a logical step from where we were," Haas said. "It's not a piecemeal approach. It's trying to look at farming from a big-picture standpoint." 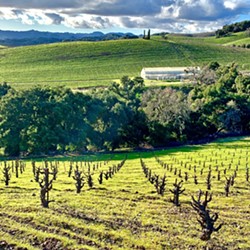 That picture includes three pillars: soil health, animal welfare, and farmworker fairness. These are the building blocks that Tablas Creek committed itself to during a pilot program it participated in, recently becoming the first Regenerative Organic Certified winery in the world. Established in 2017 by a group of farmers and business leaders—including Patagonia, Dr. Bronner's, and the Rodale Institute—the Regenerative Organic Alliance's certification program aims to create solutions for issues such as climate change by getting farms around the world to adopt regenerative organic practices.

Haas said Tablas Creek was drawn to the program for a couple of reasons. While farming both organically and biodynamically are important practices that the vineyard and winery have done for a long time, Haas said they only tackle part of the picture. Organic—chemical-free farming—and biodynamic—boosting soil fertility through things like composting, animals, and cover crops—processes focus on soil treatment. 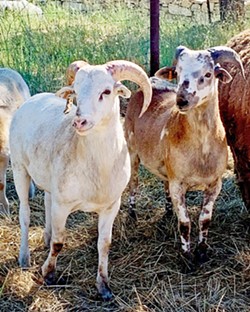 "It only focuses on your farming, it doesn't pay attention to the rest of your practices," he said. "What none of those certifications do is talk about resource use, or use of water, or pulling carbon out of the atmosphere, these sorts of big-picture questions."

Regenerative farming looks at the land as a whole, incorporating organic and biodynamic practices into a larger lens that includes treatment of the animals and humans working the land as well as capturing carbon back into the soil and reducing the need for irrigation. The goal, Haas said, is to farm in a way that makes the land as self-sustaining as possible.

Not just replacing chemical amendments with organic additives. Not just diversifying the plants in the vineyard. But consciously creating an ecosystem where animals can graze on cover crops and leave behind their remnants, which in turn feed both the soil and the plants that take soil's nutrients; workers can have input into the way the land they tend on a regular basis is treated; and the land needs little from the world outside of it to flourish.

"Sheep when they graze, return 80 percent of what they eat back into the soil," Haas said.

That includes carbon, one of the greenhouse gases scientists say is responsible for global warming. It turns out, Haas said, the more carbon that soil contains, the better it can hold onto water.

Through organic, biodynamic, and dry farming, Tablas Creek was already actively working on some of regenerative farming's central tenets, Haas said. With the Regenerative Organic Certification, the vineyard had to measure the impacts of the things they were doing, audited by third parties to ensure those practices actually had the desired impact. In most cases, Haas said, Tablas Creek already measured up to the certification's requirements.

However, the pillar that Tablas Creek did the most work on was farmworker fairness. Hass said that while they were paying farmworkers a living wage and ensured that working conditions were safe, certification auditors had some suggestions for the vineyard. Instead of continuing with a top-down management style, the vineyard starting having 30- to 45-minute roundtable discussions with its crew to solicit suggestions and feedback. 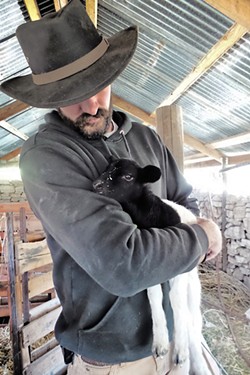 Because the crew is intimately aware of the "micro-micro-climates" of each hill and valley on the property, Haas said they have valuable insights into best practices. For instance, the vineyard changed its pruning schedule due to suggestions made about the blocks that sprout later in the year.

"We should go block by block through the vineyard instead of variety by variety," Haas said. "The fact that these guys that are on the ground, they know that there's a one-week difference between when this block and variety sprouts."

The end goal of all of Tablas Creek's practices is to be true to its vision.

"It starts really with our belief that farming this way makes better grapes and better wine," Haas said, adding that the vineyard is a small piece of a broader community. "I hope we're not the only [winery with the certification] for long. This is one of those things where the more people who do it, the better it is for all of us."

Anna Meyer, the alliance's brand and supplier liaison, said it all began with a shared concern about the way the word "regenerative" was starting to be used in the marketplace. Dr. Bronner's, Patagonia, and the Rodale Institute wanted to be sure that the suppliers in their respective chains were implementing the practices needed to achieve truly organic, socially aware, regenerative products.

Due to a growing interest from consumers to purchase products that are environmentally and socially conscious, some companies resort to green washing, Meyer said. This includes making a minimal change that doesn't necessarily make a big impact or address a systematic problem. However, that change enables them to market their product in a way that relies on consumer attachment to certain buzz words.

"We want to believe that the companies that we're buying from are doing good and that they're being honest and have integrity and that we can trust the things that we pick up off the shelf and what we're told and sold," Meyer said.

"That's just not necessarily the case." So the alliance came up with a certification framework and piloted in with 19 farms, including Tablas Creek, which were growing different crops across the globe. Meyer said the alliance wanted to be sure that its framework could be adapted across agriculture systems in a variety of crops, locations, languages, and cultures. Most of the pilot farms completed their certification this past summer, and the alliance is currently working with several others that are in process.

Agriculture is generally an extractive practice, Meyer said, taking nutrients from the soil, using up land once dedicated to wilderness, using water that may not always be around.

"Rather than farming with nature ... agriculture has become—it has depleted the land and it's a major contributor to climate change, and it doesn't have to be that way," Meyer said. "We all eat food every day, and we will always do that. ... We really do believe that the world does depend on how we farm." Δ