As the pandemic winds down, Central Coast cities consider the future of pandemic-era outdoor dining

Even with its renowned creekside dining space, Novo Lounge and Restaurant struggled to make up for around 20 tables that were lost to indoor dining and capacity restrictions launched at the height of the pandemic. Fewer tables meant fewer customers, and that quickly led to a lot less revenue.

So when the city of San Luis Obispo rolled out a program in July of last year that allowed restaurants to build dining areas in public street parking spots, in parking lots, on sidewalks, and in alleyways, Novo jumped at the chance. Samantha Welch—director of operations at Blue Mango Restaurant Management Services, the group that operates Novo, Luna Red, and a few other San Luis Obispo County restaurants—said Novo almost immediately applied for an Open SLO encroachment permit, which the city is still giving out free of charge to businesses hoping to operate outdoors due to COVID-19.

"I'm grateful to the city for making the changes that they did," Welch said, "and for us it's been super beneficial."

Novo put some of its own money into the parklet too, enclosing it in lattice fencing for a little extra security from passing traffic, stringing up lights, adding some potted plants, and hauling out umbrellas and propane heaters whenever necessary. But—unlike restaurants such as Eureka!, which has everything from Plexiglas barriers between tables to roofing on its parklet—Welch said Novo refrained from putting too much into the potentially temporary space. Although Welch said she loves the bustling atmosphere parklets create downtown, it's still not clear whether they're here to stay.

"But if it were something that became a full-time thing then we'd absolutely invest further into it," she said.

As Californians become increasingly vaccinated and COVID-19 restrictions ease, cities and business owners throughout the Central Coast are trying to figure out what to do with pandemic-era outdoor dining spaces. Although parklets helped resolve a number of pandemic-specific problems, city officials say they also create others, including reduced parking capacity, accessibility issues, and intensified needs for already hard to find restaurant employees.

In the city of SLO alone, 38 businesses have parklets in street parking spots, around 10 are using sidewalk space for outdoor dining, and another handful are still using private parking lots for operations, according to Transportation Manager Luke Schwartz.

The city also removed a lane of traffic on Higuera Street and replaced it with a bike lane, and made the last stretch of Monterey Street going into Mission Plaza a one-way street, making room for street dining outside Giuseppe's and Finney's. Other outdoor spaces, like Mission Plaza or private parking lots across the city, became new hubs for dining. But, Schwartz said, none of that was intended to be permanent.

"It's been a real noticeable challenge to our parking division," he said.

The city is missing more than 60 public parking spots due to parklet dining, Schwartz said, at an estimated cost of around $230,000 in lost parking meter revenue each year. SLO allocated about $600,000 in general and CARES Act funds to the Open SLO program, through which the city constructed parklets, made modifications to Monterey Street, and created public health signage. There are also additional city maintenance costs associated with outdoor dining that aren't fully captured in that $600,000, Schwartz said. 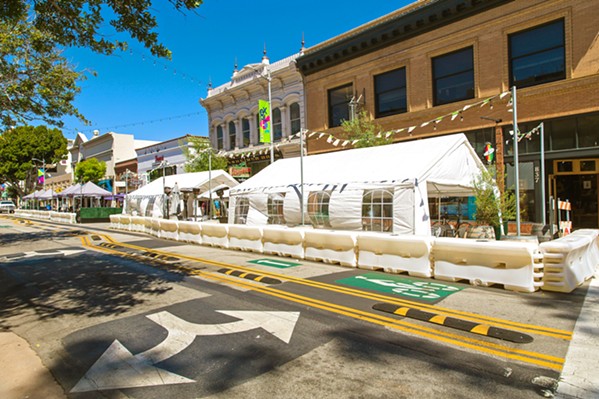 One way the city could offset some of those costs, he said, is through the creation of an annual parklet permit fee. Businesses are already required to get Open SLO encroachment permits and insurance before building parklets, but, as of now, the permits themselves are free.

SLO City Council is slated to discuss that possibility and others at a public study session on outdoor dining on July 20, where Schwartz said members will consider making parklets and other features of the city's pandemic response permanent fixtures. SLO also just launched a survey regarding outdoor dining, with the hopes of getting input from community members and business owners before the July study session. A decision has to be made before the end of this year, when SLO's relaxed outdoor dining and parking measures are set to expire.

Cities throughout SLO County are grappling with similar considerations.

In Grover Beach—where roughly 22 businesses have obtained temporary use permits for expanded outdoor dining on sidewalks and in parking lots, and only two have streetside parklets—City Council expressed interest in permanently relaxing its minimum parking requirements at a meeting on May 24. Still, several council members said they were concerned about the proximity of street parklets to fast moving traffic and lacking disability accessibility on sidewalks where restaurants have set up expanded dining areas.

Pismo Beach City Manager Jim Lewis said his city has lost an estimated $200,000 in parking fee revenue due to its six parklets downtown. But, more importantly, he said, the loss of those parking spots also equates to more difficulties accessing the coast, which is generally considered a big no-no for cities in the coastal zone. Lewis said city staff are still researching whether permanent parklets would violate coastal zone regulations.

Both of Santa Maria's core streets, Main Street and Broadway, are owned and maintained by Caltrans, which Ng said would have had to approve any parklets or other expanded dining options at restaurants on either of those streets. So while there are a few restaurants in town with tables and chairs set up on sidewalks, Ng said there aren't any street parklets. The rest set up dining spaces in their private parking lots, which are allowed through relaxations to zoning regulations that Santa Maria passed in May 2020 in response to COVID-19.

Ng said he's hearing mostly from business owners who want to keep the banners and temporary signs advertising their hours of operation and services available. Businesses aren't normally allowed to have temporary banners unless there are specific circumstances, Ng said, because the city wants to encourage businesses to invest in permanent signs. That rule was relaxed in response to COVID-19 too, and Ng said businesses want it to stay that way.

"I think as the pandemic winds down we'll need to reengage with the business community and talk about whether we'll continue those accommodations into the future or not," he said.

There's no specific end date for Santa Maria's signage or outdoor dining rules, and Ng said staff haven't formally discussed how they'll move forward. But he said it's likely that some allowances from the pandemic could carry over into the future, including outdoor dining.

"We're open to the idea because it allows for greater visibility for the businesses but also opportunities for our customers to enjoy a meal outside," Ng said. "And we have great weather on the Central Coast, so why not take advantage of it?" Δ