Julie Heffernan's As the Waters Rise exhibition at the Harold J. Miossi Art Gallery will be on display until Oct. 11. For more information about the artist, visit her website at julieheffernan.net.

Painter Julie Heffernan told New Times that her work is often compared to that of Hieronymus Bosch.

For those who haven't dabbled in art history, Bosch was one of the most notable painters among the Early Netherlandish Renaissance. Chances are high that you've seen The Garden of Earthly Delights in a history book.

Despite the notoriety of the artist she is likened to, Heffernan says she doesn't quite agree with the comparison. Even so, to have one's work so often compared to that of a 15th century artistic genius at least shows that Heffernan's work is wholly unique among her contemporaries.

Painted on canvases that could fill a wall—whose exhibition As the Waters Rise is on display at the Harold J. Miossi Art Gallery until Oct. 11—Heffernan's pieces feel at once antiquated and of the now. At a quick glance, the grand and intricate scenes she renders look like whimsical wonderlands that might have paired well with a centuries-old fairy tale. But with a closer look at the details, the viewer can begin to see the subtle but persistent nuances that hide in the literal nooks and crannies that Heffernan paints.

"I am firmly devoted to imagery that seems familiar, so that anybody from any different walk of life can recognize something in my work that relates to their own life," the Brooklyn-based artist said. "But then when they look closer, they'll see that everything's been kind of shuffled to take you to a different way of reading that familiarity: so, defamiliarizing the familiar."

Her 66-by-68-inch piece titled Self Portrait with Red Tent—part of the current display at Miossi Gallery—looks like an idyllic children's book scene at first: an unnaturally aquamarine-colored body of water; knobby trees with delicately hanging branches; a staircase carved into a hillside, leading somewhere beyond the canvas' edge.

But with a closer look, the image that first feels so familiar begins to reveal its unexpected, even unsettling details: a skinny metal pipe dumping green sewage into the water; orange traffic cones dispersed throughout the landscape; a man who appears to be drowning beneath a majestic tent structure covered by a red curtain. Right as the viewer starts to feel comfortable, we are jolted into awareness of a not-quite-right reality.

For Heffernan, that disturbing reality is climate change, or as she opts to call it, "the climate catastrophe."

"It's no longer just something as anodyne, harmless as climate 'change,'" she said. "This is serious stuff." 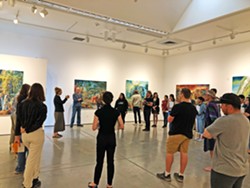 Before making its way to San Luis Obispo, the collection was slated to go to states that have experienced major flooding catastrophes, particularly those states that tend to go red during election season. Right before the collection opened at Louisiana State University in Baton Rouge, a superstorm and massive flooding forced residents to "drag all their worldly goods out to the sidewalk," Heffernan said, making her exhibition painfully timely.

"Several of the paintings are depicting how we are going to manage when the waters rise," she said. "We can't just throw a lot of money at the problem. ... We have to rethink everything."

Though Heffernan has had a long and illustrious career since receiving her MFA from Yale University in 1985, it is only in recent years that her work became decidedly political.

"It was basically after Hurricane Sandy that I decided to change my work and focus on the climate situation," she said. "That was the first show that was entirely devoted to looking at the climate catastrophe and addressing it head-on."

Other recent exhibitions, Heffernan said, have sought to empower women, especially in light of the #MeToo movement.

But Heffernan emphasized that she wants her more politically driven work to do more than inspire unproductive outrage.

"It became really important not to just make work about oil spills or heaping scorn on ExxonMobil," she said.

Though Heffernan often finds her initial inspiration from issues like climate change or women's rights, she says her actual painting process comes down to "letting the painting tell me what to do."

"It's as though the painting kind of pre-exists, and it just needs you to bring it into real existence," she said. "You make a billion choices, but only one of them is the right one—and what does it mean to be right under such circumstances? I've spent a life testing that, and if I follow what it dictates, almost invariably an interesting world that fascinates me and surprises me will show up." Δ