As they lay dying: Prison inmates find redemption through a hospice program

Roger Brown vividly remembers the first man he helped through death. Brown held vigil over Vernon Burnett, a 42-year-old California Men’s Colony inmate whom doctors had determined would soon succumb to his pancreatic and liver cancer. Burnett’s passing wasn’t an easy one. 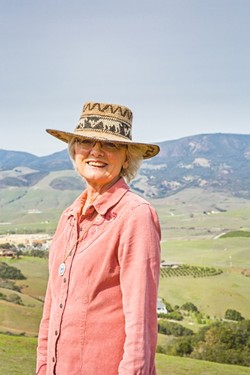 “He was puking his guts out; it was the smell that was almost overwhelming,” Brown remembers. “He had been through so much radiation that his skin had turned green.”

Brown sat up with Burnett the night before he passed away. Despite his pain, Burnett refused medication.

“Vernon refused any pain medication; he wanted to be mindful,” Brown said. “The drugs would deaden the experience he would have during the transition from life.”

Burnett did not die fearfully, like some of the men Brown would later care for. Burnett’s faith gave him strength at the end of his life.

“He had such a deep faith in his tradition—he was a Christian, he knew in his heart that he would meet the Lord at the gates of heaven,” Brown said.

Though a spiritual—rather than religious—man, Brown said he was nonetheless impressed by Burnett’s faith.

“If I have half the faith he had, it’ll be a nice death,” Brown said.

Brown, himself a California Men’s Colony inmate at the time, was a member of Supportive Care Services, a program that teaches inmates to provide hospice care to dying inmates in CMC’s hospital. Brown cared for 34 men during his time with the program.

Hospice care seeks to support those who are facing a terminal illness, as well as people grieving the loss of a loved one.

In CMC, the program began after an inmate working as a custodian in the prison’s hospital overheard the sounds of another inmate dying in one of the hospital rooms. The custodian had previously been serving his sentence in Vacaville, where the prison offered a hospice program. Tormented by the sound of the dying man, he approached a medical doctor, Dr. Denise Taylor, and asked if there was anything they could do. 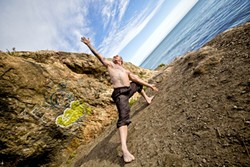 Steve Willey, then at Hospice of San Luis Obispo County, and Lorie Adoff, who would later become the program’s director of spiritual care, trained the inmates.

Inmates are drawn to hospice care for the same reasons as people outside of prison, Willey said: “Most of the men have a passion for it as much as anyone in the community.”

But some of the inmates are drawn for more personal reasons.

“Some of them want to give to a society they may feel they’ve wronged,” Willey said. “It won’t take that away, but they want to contribute something.”

Other inmates might join the program in an effort to impress parole boards, but unless they develop a real passion for what they’re doing, those participants tend to burn out quickly, Willey said.

As for successes, he said he’s witnessed remarkable changes in the inmate volunteers. In the prison environment, inmates often teach themselves not to show signs of emotion. Inmates in the hospice program, however, manage to defy this convention, Willey said, and become more trusting and open than they would be otherwise.

“One of the ways I’ve seen growth occur is men who allow themselves to show emotion as a sign of strength, not weakness,” Willey said. “They become role models of a real kind of strength.”

In 2008, CMC hired Lorie Adoff as the director of spiritual care for the program. She’d already been involved with the program for several years, as a volunteer. With an official title, and payment provided through a grant, Adoff went on to train and provide spiritual support to the men in the program.

She began her training program by teaching the men the history and purpose of the hospice movement, Adoff said.

Understanding spiritual pain, such as that arising from becoming estranged from a family member, was also a part of training. Inmates were taught how to conduct themselves around the medical staff, as well as about hospital hygiene practices.

Program participants are put through an extensive vetting process before they’re allowed to become hospice volunteers. In order to participate, they must have a clean record—be free of any disciplinary actions—for two years prior to volunteering. More so, inmates who want to participate have to show their commitment by becoming involved in other programs like AA or NA, as well as the prison’s anger management course. After interviews with the applicants are concluded, there’s typically a class of 15 to 20 inmates per training session. A new class starts every 18 months, Adoff said.

Adoff believes the numbers show the value of the program.

“The proof is in the pudding. I’ve trained 135 volunteers, and 35 of those men have paroled and not returned,” she said.

Brown is one of those inmates now out on parole. After receiving a life sentence for his involvement in a robbery and murder in 1978, he spent the next 34 years of his life in prison, 22 of them at CMC.

As Brown tells it, he agreed to participate in a crime with someone close to him.

“That was part of my immature make-up at the time. I would hear about these things the next day and I felt, ‘Damn man I could have been with them.’” Brown said. “I felt like I was being rejected.”

Brown said he grew up in a troubled home and was essentially raised by an older brother, who, having been tasked at a young age to care for three siblings, used intimidation to control them.

“That’s how I grew up, and that’s probably why I always felt like, ‘Why me? Who’s going to look out for me?’ I didn’t get that sense of love and nurturing from the people that brought me into this world, and were supposed to be the ones guiding me into learning how to live that way,” Brown said.

He also said he didn’t feel accepted by his community.

“Any time I was approached by anybody in authority, it was always with the idea that I was a piece of crap, that I didn’t fit in,” Brown said.

Now, as an adult who’s spent most of his life in prison, Brown said he realizes it was his choice to accept that he didn’t belong. His home life, and the attitudes of others, caused him to seek belonging in the wrong places.

“I was willing to do whatever it took to be accepted and approved of,” he said.

According to articles from the time in The San Bernardino County Sun, Brown and his brother were convicted of first-degree murder and other charges for their roles in kidnapping a gas station attendant, binding his hands, and driving him to a field in Riverside County, where he was shot in the side of the head at point blank range with a shotgun.

Brown said he wasn’t the one to pull the trigger, but he didn’t speak up to stop the killing, either. He said he now feels more responsible in some ways than the actual shooter.

“I was the one in my most rational mind, I could have stopped it, but I chose not to,” Brown said.

Now, Brown believes that standing up to injustice against others is a central tenet of his life, no matter the consequences.

“I know what not standing up for myself did: It cost at least one life,” he said.

Accepting responsibility for his part in the killing did not come easily. Brown spent the first seven years of his time in prison in a state of denial.

“It was, ‘I didn’t do nothing, I didn’t kill that guy; Why am I in prison? I was just there,’” Brown remembers thinking.

Despite not consciously accepting his role in the crime, Brown still experienced emotional pain in prison, which he attempted to numb through alcohol and drug use. When Brown found that drugs and alcohol wouldn’t allow him to escape the pain he felt, he began to reevaluate his life. He enrolled in 12-step programs, in which the final steps are to serve others, which he said inspired him to join the Supportive Care Services program.

“At that point, I was still afraid of being with someone that was dying, but who is more scared—me or the person in bed dying?” Brown said. “It goes to the idea of service, service to everyone, or just the people I’m comfortable with?”

What stuck with Brown about the hospice training wasn’t just learning how to help others, but learning about himself.

“When you go into a room with someone close to death, they become hypersensitive, both emotionally and spiritually,” Brown said. “Training taught me to be aware of who I am so I can be with another person.”

The time spent bedside and the conversations that occurred there stood in marked contrast to the rest of prison life.

“The talk on the yard gets old; it’s all crap,” he said. “When you’re sitting next to a man dying, all the bullshit goes out the window. One thing I learned, the question they want answered is: Did my life make a difference? Was I loved? Did I love well? Did it matter? The idea of a legacy: How will I be remembered?”

Supportive Care Services is currently undergoing a transition at CMC. In 2013, Adoff retired; at the time, she was the only employee at CMC who was specifically assigned to run the hospice program. CMC then lost funding for Adoff’s position in its annual budget, which is set by the California Department of Corrections and Rehabilitation in Sacramento. CMC appealed the decision, and funding for the position has been reinstated. However, CMC continues to search for someone to take over the job, according to Public Information Officer Monica Ayer.

For now, social workers at CMC have agreed to supervise the hospice care program, Ayer said. Teams are still being assigned to care for the sick, but enrichment programs for the hospice volunteers have declined, according to Ross Eulenfeld, a current CMC inmate. There are now 33 men providing care through the program.

Brown is now out of prison, having been on parole for 19 months. He works as a handyman in SLO County. Though he can no longer work in hospice due to his record, Brown continues to hold service to others as a central part of his life.

“I have a view of life that it’s just about me being of service to other people.” Brown said. “That’s where I get my energy.”

Now that Brown is outside of the strictly regimented life of prison, he’s had to adjust to things most people take for granted.

“One of the first things I realized after a week was, man I gotta go buy toilet paper!” Brown said. “All those things, I had to start learning and relearning how to do.”

In addition to his work as a handyman, Brown also helps clean up at a yoga studio in San Luis Obispo in exchange for free sessions. Brown taught yoga while in prison, and now he favors the bikram style, where participants practice in a heated room. Brown said he might soon receive training to become a bikram instructor.

Today, Brown describes his problems as “quality problems.” While inside prison, he wondered if he would ever get to experience these quality problems again. And he wants to give back to his community, whether it’s for people who are on their deathbeds or far from it.

“Why do I have to wait until someone is dying to care about them?” he asked.