At Cal Poly, Josh Machamer directs Shakespeare's 'As You Like It' 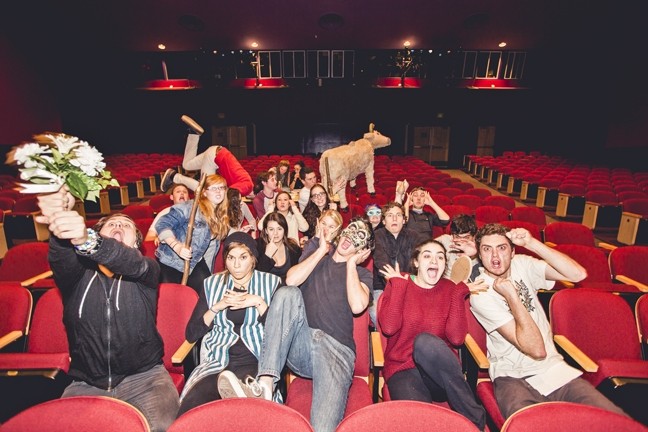 If there’s one word that can sum up Josh Machamer’s productions, the word is “considered.”

Over the years, the Cal Poly theater professor has selected plays that reimagine the ways that audiences experience live theater, but never do so ostentatiously. Rather, Machamer’s stuff works because he seems to have a reason for everything, whether staging a Peter Handke play outdoors, for instance, or implicating the audience in a retelling of The Trojan Women by bringing them onstage, too. Such choices may have been unexpected, but they always seemed to go with the grain of the material, rather than against it.

This year, Machamer directs the Cal Poly Theatre and Dance production of As You Like It, which opens Thursday, Feb. 27, at the Spanos Theatre. Given Machamer’s more experimental selections over the past few years, the Shakespearean comedy may seem a surprisingly traditional choice. But as always, he’s found a way to approach it with new eyes.

Machamer’s take on As You Like It, which I recently saw in rehearsal, places emphasis on story over spectacle. There are no artificial sound effects, and no music at all, save for the singing onstage (Phillip Valle wrote the four songs, which alternate between cheery and haunting). Sets are spare, yet effective: A forest is conjured with ladders of varying sizes, and a single, freestanding door represents the passage between a duke’s royal court and the unknown of the wilderness outside.

As the play opens, Duke Senior (played by Christopher Riordan) has been overthrown by his brother, Duke Frederick (Kyle Palazzolo). Duke Senior thus is forced to retreat to the Forest of Arden, along with his loyal subjects, while his usurping brother assumes control of the duchy. Duke Senior’s daughter Rosalind (Katherine Epstein), however, is left behind to keep Duke Frederick’s daughter Celia (Brigitte Losey) company.

Rosalind, is the play’s heroine. When the young Orlando de Boys (Devin O’Brien) comes to Duke Frederick’s court to compete in a wrestling match, he and Rosalind instantly fall in love. Orlando is escaping his own tyrannical brother, Oliver (Torin Lusebrink), who has become Orlando’s guardian following the death of their father. Charged with caring for his brother, Oliver has nonetheless denied Orlando any inheritance or a chance at an education.

Pitted against Charles the Wrestler (also played by Christopher Riordan), Orlando enjoys an unlikely victory. Machamer stages the wrestling match behind a black scrim, beyond which the two characters struggle like shadows against a white background. The mood of the court is dismal and dark, and a kind of hooded mystery presides over these scenes. Characters will move about in black cloaks and black Venetian masks, Machamer explained, evoking a distant and stifled atmosphere; a thoroughly different world from that of the forest outside.

“We wanted to showcase this sparseness,” he went on, “the sense of these isolated souls behind this veil and this façade, and what it’s like living within that type of world.”

After winning the wrestling match, Orlando heads home, but grim tidings await: His brother, Oliver, upon hearing of his success, plots to kill him in his sleep, he learns. Thus, Orlando and his servant Adam (Byron Bennett) must flee into the Forest of Arden.

The wooded wilds of Arden quickly become the main characters’ common denominator: Rosalind, too, will shortly find herself there. After Duke Frederick warns her of attackers who plan to put her to death, she retreats to the forest as well, with Celia at her side. Both women are disguised: Rosalind as a young man, calling herself “Ganymede,” and Celia as Aliena, a poor maid. They bring Touchstone, the fool (Gage Greenspan) with them, too.

The transition from the court to the forest is a dramatic one, and once it takes place, we never go back. Characters will walk through the set’s freestanding door, Machamer explained, shedding their dark veils to reveal more pastoral garments underneath.

“The moment of transformation needed to be in front of the audience’s eyes rather than hidden from us,” the director explained. “And I had this image of a door—this door that, like Alice in Wonderland, people from the court walk through … and how that door is a portal into this other world, this other real world that’s out there.”

Costumes in this version will hardly be period, Machamer divulged. They’re intended to create more of a timeless effect. Costume designer Tom Bernard was tasked with creating the look of both worlds, one of them gothic, garish, and contemporary, and the other populated by earth-toned peasant skirts, vests, and capes.

Our central characters all find themselves in the Forest of Arden, where they’re bound to run into one another. As Orlando is stumbling across the camp of the banished Duke Senior, “Ganymede,” “Aliena,” and Touchstone come across the shepherds Corin (Jacob Carsaro) and the lovestruck Silvius (Aron Daw), who pines after the shepherdess Phebe (Sophie Canter).

Of course, it’s not too long before Rosalind-as-Ganymede comes across Orlando. This is where the story takes its deeply strange and fittingly Shakespearean turn. Taking her for an effeminate man, Orlando confides his love of Rosalind to “Ganymede,” aka Rosalind. Ganymede tells Orlando that she—or rather “he”—can cure his lovesickness by pretending to be a woman, to whom Orlando must come every day and try to woo. Eventually, Ganymede explains, Orlando will go crazy, and not think about love at all anymore!

Epstein, who delivered a chilling performance as the naïve and ill-fated Polyxena in last year’s Trojan Woman 2.0, plays Rosalind with “real originality and genuineness,” observed Machamer.

“That’s one of the things I liked about her, was her ability to be honest and a really good listener,” he said. “Because I think that’s important when you look at what has to happen in the play. This man falls in love with a man pretending to be a woman. There’s this sense of admiration; this sense of trust that has to occur. And here’s this woman who is looking to justify her heart being given away to someone.”

As Orlando receives lessons in love from his beloved in disguise, Phebe becomes interested in Rosalind as well, thinking she’s Ganymede. Oliver and “Aliena” fall in love, too, and Touchstone pursues the goatherd Audrey (Maddie Pomaro). The mistaken identity charade stops just short of becoming farcical.

While the four couples navigate their way through a kind of love octagon, several supporting characters lend insight and texture to the play. British actor Mike McCullough plays the melancholy Jaques, who delivers the play’s famous “All the world’s a stage” speech. McCullough manages to infuse the familiar monologue with a kind of freshness, interrupting all other characters’ chatter to blurt out its first well-trodden line with a force that seems to take everyone, including himself, by surprise.

Pleased, and perhaps slightly taken aback, by his sudden command of the space, Jaques proceeds to follow the idea, allowing the monologue to take organic shape. As McCullough begins the speech, he steps away from the action onto an extension of the stage that protrudes into the audience. The lit forest is instantly replaced by a single spotlight.

“I want him to step away, so that there is this clear separation of the play, almost breaking the fourth wall and inviting the audience into these musings that he has for himself, these discoveries. I think the way those old nuggets work is trying to place them as though they were discoveries,” said Machamer.

“And it’s not a speech that is about building you up! It’s very cynical, but I think that cynicism is based upon a discovery that he has. All of a sudden, the curtain is peeled open, and all of a sudden he steps into embracing and seeing the audience, trying to bring them along in his particular journey, and then closing the curtain back up and then walking away.”