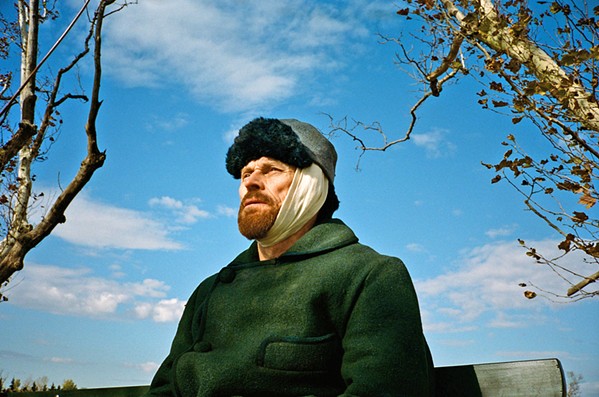 Glen Julian Schnabel is a singular filmmaker, one who doesn't mind challenging viewers. He began his career as a painter, coming to prominence in the 1980s, and he parlayed his art fame into filmmaking in 1996, making a film about the Brooklyn graffiti street artist turned primitive-neo-expressionist and darling of the NYC art scene, Jean-Michel Basquiat, who died of a heroin overdose in 1988. In 2000, he made a film about gay Cuban poet, novelist, and anti-Castro rebel Reinaldo Arenas. His best film, 2007's The Diving Bell and the Butterfly, was about Elle editor Jean-Dominique Bauby, who was left totally paralyzed by a massive stroke save movement in his left eye, which he used by blinking to dictate his memoir, upon which the film is based. His take on the final years of Van Gogh's life will definitely divide audiences. Its rottentomatoes.com aggregate is 82 percent favorable by critics, but only 52 percent by audiences. In the screening we attended, two women walked out midway through. The film takes its time and is very interested in Van Gogh's psychology, his feeling of isolation, his aberrant behavior, and his unique way of seeing the world. In fact, the film opens from Van Gogh's point of view, and the handheld camera work and lens distortion, which is used every time we see as Van Gogh sees, reminds us that his perception was unlike anyone else's. The cinematography by Benoît Delhomme (The Proposition, Lawless, The Theory of Everything) is quite remarkable, creating a visual feast. It's a look at a sad, tragic, misunderstood man's sad, tragic last days. The film's lasting message is that Van Gogh was a man born in the wrong time.

Anna Visually this film was stunning, and Dafoe's performance was undeniably fantastic, but it's a heavy, heady film that balances bleakness with brilliance. Vincent's isolation and enigmatic persona is all encompassing, and while the beauty of his work is lauded today, he was persona non grata while he lived. His connection to the world lay deeply in his relationship with his brother, who was his only support emotionally and financially. The film is purposefully slow, reflective, and intricate with Vincent's inner workings, but the counterbalance to its plodding pace is its visually absorbing perspective, switching from the artist's point of view with an entirely different quality, to wide sweeping shots, to arresting minute detail. I totally see this film not working for everyone—I get that. It's a deep dive into the mind of a complicated, wholly sad, and with a mad dash of crazy individual, and I can see audiences writing it off as an art house film that bagged a big star. Luckily I like a good melancholy journey on the big screen, and At Eternity's Gate delivers Van Gogh's later life with quiet brilliance, with much praise going to Dafoe for a rock-solid portrayal of the tormented artist. 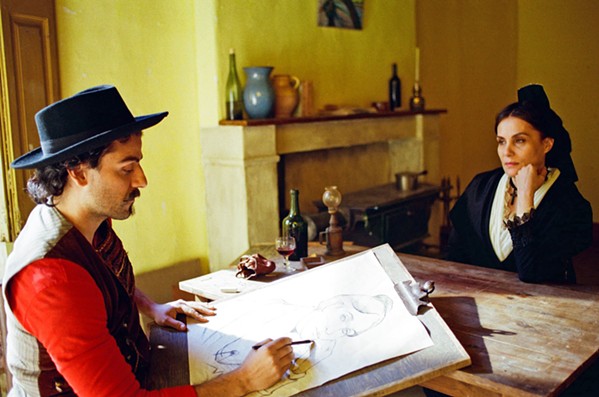 Glen Dafoe is fantastic—what an expressive face! He plays Van Gogh with a quiet desperation, in stark contrast to his earnest and deeply concerned brother, Theo (Rupert Friend), and his only personal friend, the flippant and self-possessed Paul Gauguin (Oscar Isaac), who turned into the object of Van Gogh's obsession. You may have heard that Van Gogh cut off his ear to give to a prostitute, but in fact he cut it off as a cry for attention from Gauguin, who had announced he was returning to Paris. Likewise, the mythos is Van Gogh shot himself and essentially committed suicide, but Schnabel's version instead supports the idea that Van Gogh was shot by two roughhousing young men. To the townspeople in proximity to Van Gogh, he was a monster, a weirdo, and an object of ridicule. He scared people, and sometimes he scared himself, becoming blackout drunk and engaging with people like a madman. His work didn't sell during his lifetime, which magnified his insecurities. There's an amazing scene toward the end of the film where a priest (Mads Mikkelsen), assigned to determine if Van Gogh is well enough to leave an asylum, shows Van Gogh his own canvas, asking him if he really thinks he's an artist, telling him the painting is ugly and its scene grotesque. It's heartbreaking, almost as heartbreaking as when Van Gogh is laid out in his coffin surrounded by his paintings as people walk around, looking at him and his work as if it were some kind of carnival sideshow. If only Van Gogh could have seen how revered his work would become, maybe his life wouldn't have been such a tragedy.

Anna The scene with the priest was really memorable. Van Gogh wonders aloud why God would make him a painter if his paintings were ugly; his attempts to explain why he paints to the priest fall on deaf ears. While the priest may not think him well enough to leave, he doesn't think there's anything left for them to do for the tortured artist and sends him on his way. Theo then sends Vincent to a friend and doctor, who we watch Van Gogh bond with as well as paint a portrait of. One really satisfying aspect of the film is watching Dafoe in the painting process, something Van Gogh thought should be quick and purposeful. He certainly was a man compelled to create. It didn't make him happy or satisfy him, yet it seemed the only thing he knew he was meant to do. Loving Vincent (2017) was a visual feast, a painted fictionalized portrayal of the artist's final days, and perhaps its lack of utter bleakness appeals to a bigger crowd. However, Dafoe's haunted portrayal and Delhomme's fascinating cinematography paint a devastating picture of Van Gogh's final days and vast internal struggles. Δ