At m.BODY, life begins at the edge of your yoga mat

I’m lying on my back, my butt edged up as close to the wall as possible. My legs are splayed in the air, resting on the wall in an imperfect “V” shape. I can feel the blood pulsing through my veins; see golden light flicker across the ceiling of m.BODY Yoga studio.

Here we are on Saturday morning, reaching for a heightened state of awareness, while most have yet to have their double espresso. “We” includes a handful of incredibly spry women of differing ages, all of whom are walking their own journey to inner peace. Teacher and m.BODY Yoga Co-Founder Tawny Sterios leads with gentle wisdom and childlike verve. 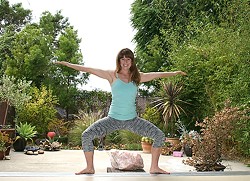 “Find your breath,” she says, moving from student to student and softly correcting posture. This is by far the hardest part of yoga: remembering to breathe. Underneath the poses and stretches, breath—and the quality of it—is what lies at the heart of the art form. After class, I roll up my mat and wait my turn to talk to Tawny, who takes time to converse with—not just advise—her students.

She said she was honored to share her personal story with New Times, which regularly features the art of dance, theatre, and music. Yoga, which has been around for the past 5,000 years, is about so much more than simply stretching in spandex.

Before becoming a mantra-uttering yoga goddess, Tawny had a very different identity. Throughout her childhood and teen years in Mission Viejo, she lived, breathed, and ate competitive soccer.

“I started at 5 years old,” Tawny said. “I was introduced to yoga at a young age, too, 14. My older sister was 16 at the time and getting her driver’s license. Our parents were health conscious, so they got us a gym membership.”

She can still remember those delicious drives to the gym with her sister.

At that age, freedom is freedom.

“When I look back at those times with my sister, I felt this energy in the car, as if we were really ‘going somewhere,’” Tawny said with a laugh. “The ability to go to the gym—it gave me the opportunity to connect with something that was healing.”

Anyone who’s played soccer for more than a few weeks knows that the sport is intertwined with injury. Like so many first-time yoga devotees, Tawny said she was hooked on corpse pose, or savasena, which entails lying motionless on the ground and releasing all tension. Basically, the opposite of trying to score a goal.

“I came out of that state and felt altered,” she said. “I became aware that I had this ability to be more deeply present to my body, my breath, my thoughts, everything. This was a very empowering moment—basically a new internal world was awakening, one I hadn’t yet met.”

Tawny continued to pursue soccer through high school, earning a few potential scholarships for college. Her yoga practice also continued to develop. The two practices were somewhat at odds with one another.

“After 20 years, I decided I wasn’t going to play anymore,” she said. “I was letting go of all I knew and all that had helped me stay healthy and safe [through my teens]. It was a mourning process.”

Tawny said she was done “pushing” her body; she wanted to instead listen more closely to its inner workings. The young woman wanted to chase the flutter her heart experienced every time she said “Namaste.”

Tawny credits her decision to study nutrition at Cal Poly to her love of yoga (becoming mindful and aware of the body has as much to do with downward dog as it does with food).

These days, Cal Poly offers a range of student yoga classes (taught by no fewer than 20 teachers). Back in the early 2000s, things were different.

“Yoga has experienced a big shift in the past 12 years; there’s more workshops, more studios, and more offerings, as well as retreats on the Central Coast,” Tawny said. “There’s wine and yoga, and even beer and yoga. Back then, there was no special yoga room at Cal Poly, so we practiced in the wrestling room.”

Without any formal teacher training, the college student replied to an ad in the paper looking for Cal Poly yoga instructors.

“I knew I didn’t know everything; you never do. That’s the beautiful thing,” Tawny said. “I wanted to honor that I did know something, and I wanted to share that. It was so powerful to trust myself and get the response back from students, who were so grateful to have an opportunity to practice yoga.”

After undergoing two immersive yoga teacher trainings in LA (there were none on the Central Coast at that time), Tawny was exposed to the more spiritual side of the art, including meditation.

“It rocked me,” she said, adding that she was also inspired by the Yoga Centre, where she practiced regularly.

“I was attracted to the space and architecture of the building, and I started practicing there and cleaning the floors to get discounted or free yoga,” Tawny said.

“Peter has a passion for making buildings that are beautiful to walk into and change your outlook just by being in them,” Tawny said. “It supports the vision of yoga and our center to have that kind of shift happen. It’s a shift in perspective.”

In keeping with Peter’s design aesthetic, the five-year-old studio is clean, functional, and modern with a floor-to-ceiling roll-up door that opens up to a lush garden.

“People go into m.BODY and they feel better already. The garden is part of this intention. Being around beauty and nature, you start to feel that you are beautiful and you are a part of nature, and I love that,” Tawny said. “It’s delicious and it goes hand in hand with yoga, how to transform yourself. This space does that.”

The couples’ 7-year-old daughter, Athena, practices yoga in the space alongside people of all ages, skill levels, and walks of life. When students say they “haven’t mastered” a certain pose, Tawny just smiles. This is the wisdom that comes from teaching everyone from gurus in India to children on the White House lawn as part of Michelle Obama’s National Anti-Obesity Initiative.

“It’s about getting your feet wet and trusting yourself. No one can do your yoga for you,” Tawny said. “A teacher’s mission is to encourage students to become the best they can for themselves; to help them trust that they can do it and find their way through it. Then, own it.”

Hayley Thomas is feeling relaxed and happy at hthomas@newtimesslo.com.