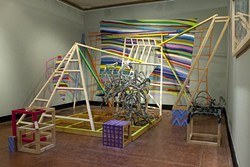 How often does a group show’s press release hint at the possibility of a kiss from “one or all of the artists?”

One … or all! After the shameless flirtation of its press materials, dizzy with whispered promises of baroque patterns and ambiguous structures, I stumbled panting into the SLOMA exhibit “Thresholds,” a group exhibit of new works by jazzy young artists Jamie Bruzenak, Adrienne Allebe, and Nick Wilkinson. But while the exhibit’s come-hither press release had seemed intended just for moi, the space was already crowded with admirers when I arrived at the exhibit’s opening. Alas, l’amour had thwarted me again, and I wept into my glass of rosé.

In truth, Bruzenak, Allebe, and Wilkinson needn’t have pawned their kisses, for “Thresholds” is a delight to behold, from Wilkinson’s totemic, abstracted paintings to Bruzenak’s geometric bug patterns, to Allebe’s melancholically titled cosmic tableaux.

“Thresholds” explores “how humans create physical structures and psychological frameworks in order to control, protect and make sense of mysterious and significant aspects of the ‘natural’ world,” according to that dirty tease of a press release, and in this, at least, the exhibit delivers.

Let’s start with Allebe, whose lovely abstracted works in watercolors and colored pencil are often contextualized by heartbreaking titles. Two Hearts Beat as One is elsewhere answered by Two Hearts Beat as Two, both of which feature intersecting patterns overrun by swells of color and texture: rippling water; rainbow feathers.

I saw Allebe’s Escher-like Interference 100 different ways: stare at the center of its designs and its two dimensions become three; patterns become levitating forms before snapping back to flatness at the blink of an eye.

Elsewhere, Allebe abandons the geometric structure of such works and wanders into the smoky ethereality of Sweet Nothings and Ocean of Noise—oil paintings on round wood panels depicting, respectively, a winged creature in flight and a flood of water swirling out toward the viewer. The works have a New Age-y quality that, for me, brought up memories of the artwork in my Big Sur grandmother’s house, which seems more and more awesome every time I visit (she’s into wolves, feathers, and Native American women whose black hair becomes the night sky).

Bruzenak’s work, which had been accurately described as “shamelessly Rococo,” shows a similar interest in the symmetry and mathematics of natural forms. Her Small Refuge series employs contrasting styles: floral patterns are flatly colored, graphic, and bright, while the earth itself is depicted in a more painterly, organic style. Bruzenak’s Fighting Back depicts the reclamation of an architectural structure by brightly colored ferns, an image of the earth bucking off the artificial constructions placed upon it. Many of her gouache works on paper are mounted and presented under glass, like exotic specimens.

Bruzenak’s concentric designs occasionally echo Wilkinson’s, which themselves evoke both folk art traditions and children’s drawings—bright, loose, and liberatingly imperfect. His acrylic works on wood, while largely abstract, hint at prismatic structures and the refraction of light, as seen in Triangulation. Such forms overlap in Spellbound, which employs spray texture to create an unusual landscape of smooth and rough; drops of colored paint whimsically placed at their intersections, as if to keep everything in place.

The crown jewel of the exhibit is Wilkinson’s abundantly awesome installation Oasis, which commands its own separate section of the exhibit. The installation—wood, found objects, and paint—feels like a three-dimensional version of a Wilkinson painting, exploded and frozen so you can finally understand the unique logic of its construction.

The work’s title, with its suggestions of verdant and mysterious life, seems to sum up the ethos of the show. It’s a youthful month at SLOMA, with Julia Hickey’s bright geometric abstractions on display in the other room. I left optimistic. Never got a kiss, though.