At the PAC, Dance Theatre of Harlem presents a thoroughly American repertoire 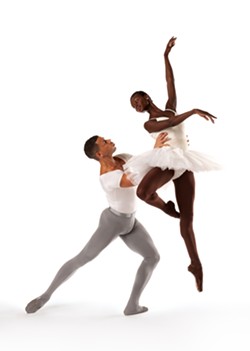 To hear the story of Dance Theatre of Harlem is to revisit the last half-century of American history.

In 1969, shortly after the death of Martin Luther King, Jr., a black ballet dancer named Arthur Mitchell began teaching classes in a garage on Harlem’s 152nd Street. Inspired by the ideals of the civil rights era, Mitchell’s goal was to give dancers in his old neighborhood the same opportunities he’d been given. Mitchell had already broken new ground in the world of dance, most notably in 1955 as the first African-American principal dancer to join the New York City Ballet. He had performed with the company for 15 years, during which time legendary choreographer George Balanchine created many roles specifically for him. The most iconic of these remains Agon, a commissioned work Balanchine created in collaboration with Igor Stravinsky. The piece was pioneering not only in form—notoriously demanding, Agon was modeled after the examples in a 17th century French dance manual, yet has a thoroughly modern sense of tension, competitiveness, even anxiety—but also in its casting of Mitchell in a pas de deux with a white ballerina, Diana Adams.

Mitchell’s classes attracted many young dancers of color who had been told there was no room for them in the world of ballet. One of them was Virginia Johnson.

“I started dancing in Washington, D.C., when I was 3 years old,” Johnson said in a phone interview. “And I really loved it right from the start. I studied in Washington until high school, and then at that point, it was made clear to me that there were no ballerinas of color, so all the training that I had put into my future was going to get me a job in modern dance or jazz, [which] is what they suggested to me. Which was, of course, heartbreaking, because this ballet thing was what I loved more than anything else. I got myself up to New York—I was actually at NYU in the dance program there—and somebody told me that Arthur Mitchell was teaching classes on Saturdays up in Harlem, and I decided to go up and get some ballet uptown. And I found out that he was forming a company, and I joined it.”

Along with ballet master Karel Shook, Mitchell founded Dance Theatre of Harlem, a primarily African-American company that would shape the way people thought about ballet—what it looked like, who could do it, the stories it could tell—over the next three decades.

Johnson paints a picture of Mitchell as visionary and exacting.

“He’s a very demanding taskmaster,” she said. “He has a very important message that he was trying to say to the world, and he was insisting on the highest quality of everything from the dancers who were participating in his vision. He could be very tough, but he was also very inspiring.”

Artistically, the company soared, becoming known for its performance of classical works like Firebird as well as original works that celebrated the African-American experience.

In the early 2000s, however, despite sold-out tours in Europe and Asia, the company was $2.3 million in debt. Dance Theatre went on temporary hiatus—and didn’t open its doors again for another eight years.

In the spring of 2013, however, the company was back on its feet, with a leaner company of 18 dancers and minimal costuming and sets. At Mitchell’s request, Johnson stepped in as artistic director.

“The Dance Theatre of Harlem closed in 2004, and at that time it was a company of 44 dancers,” Johnson said, “and we travelled across the country with two semi-trailers of scenery and costumes and a floor. We had quite a large crew, and it was a very luxurious enterprise.

“Between 2004 and 2008, there have been extreme changes in our economic climate in this country. And so when we were thinking about bringing back the Dance Theatre of Harlem company, we knew it was important that we be able to tour, and we had to figure out what the right size company would be.”

The company’s current tour includes a Tuesday, Nov. 12, appearance at the Cal Poly Performing Arts Center, where Dance Theatre will showcase several works written for the newer, smaller ensemble, in addition to the classic Agon.

“I think it really epitomizes what that look of neoclassical dance is, that kind of clean, strong energy,” Johnson said of Agon. “It’s an abstract ballet; it doesn’t tell a story. But it’s very compelling because of the way it uses rhythm and bodies in space.”

The now-legendary pas de deux is danced by Gabrielle Silvatto and Fredrick Douglas.

Helen Pickett choreographed the duet When Love, featuring music by Philip Glass. Johnson describes it as “a love pas de deux in which two people explore their relationship to movement.”

The popular spoken word ballet Far But Close, danced to the words of poet/playwright Daniel Beaty and the soulful music of Daniel Bernard Roumain, presents a thoroughly modern love story through both language and movement. Beaty’s words form the framework of the narrative, while John Alleyne’s choreography sharply defines the characters onstage.

“I know you see me starin’ from across the train,” Beaty’s prerecorded voice purrs. “Baby girl, you’re fine, but I can feel your pain … .”

“I know what you’re tryin’ to do,” a woman’s voice replies, as a solo female dancer fiercely carves out her own space on the floor, her movements all sharp angles, echoing the edge in the woman’s voice. “Ain’t happenin.’ Don’t meet brothers on no subway. No way.”

The company will also present a section of the 19th century fairytale ballet Raymonda. Stripped of its story and elaborate costumes and sets, the work becomes abstract, the beauty of the movement taking center stage.

The closing work on the program combines classical elegance with the soulful sounds of Aretha Franklin and James Brown. Titled Return, the piece originally premiered in 1990 to commemorate Dance Theatre’s 35th anniversary. Created by resident choreographer Robert Garland, Return veers intriguingly from delicate pointe work to genuine booty-shaking and back.

“Robert is pretty amazing,” Johnson said of Garland. “He’s got this very deep understanding of culture at large. The thing I love about Robert’s work is that he really wants us to look at what American culture is. American culture has got all kinds of elements to it. So he’s weaving that into his works in a really powerful way. This piece Return that we’re doing—it’s Aretha Franklin and James Brown, but it’s also George Balanchine and Petipa. Robert likes to challenge the dancers to understand that they are more than one thing.”