At the PAC, the Internet Cat Video Festival unites a community 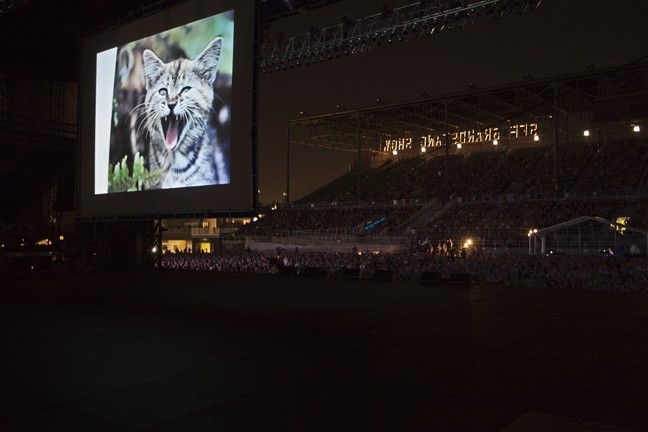 Now in its second world tour, the festival has played to sold-out audiences in rock clubs, contemporary art centers, and against a castle wall in Northern Ireland. And on Tuesday, Jan. 21, at Cal Poly’s Performing Arts Center, where the event will benefit the Cal Poly Cat Program. Selections ranging from professional short films to six-second Vine videos will screen at the event, divided into such categories as “comedy,” “drama,” “documentary,” and “foreign film.”

Now, the curious thing about a festival of Internet cat videos is the fact that all of the videos, of course, are available on the Internet for free. Thus, the popularity of the event, as curator Scott Stulen quickly observed, stems not from the cat videos in themselves, but from the sheer joy of watching cat videos together.

In fact, it was this desire for community engagement that led to the event’s inception as part of a program at the Walker Art Center called Open Field. Curated by Stulen, the program turns the Walker’s lawn into a community gathering space over the summer, with opportunities to share skills, enjoy music and poetry, participate in activities hosted by artists in residence, and simply hang out. One of the activities Stulen and one of his interns thought of was a crowd-sourced festival of cat videos. An announcement for the event, Stulen said, went viral in two hours. He was shocked when, instead of the predicted 100-or-so viewers, thousands of cat video enthusiasts turned up on the Walker’s lawn.

One of the people who saw the announcement was Will Braden, a filmmaker based in Seattle, Wash. Braden flew to Minneapolis to attend the event, and to his surprise, his entry Henri 2: Paw de Deux, one of a series featuring a French-speaking cat in an existential crisis, took the Golden Kitty, the festival’s top prize.

The success of the event led to a world tour, and to a second Internet Cat Video Festival the next year. This time, curator Stulen flew in 79 of the filmmakers to the event, including, he says, “some of the early cat video pioneers,” such as Lil Bub and Keyboard Cat.

“We had 7,000 nominations for this year’s festival,” Stulen said. “I recruited a few other curators around the country to help me go through the big pile, and then got that down to about 400 or so. And then I edited it down and made the final cut, which is about 85 videos over 75 minutes.”

A preview of the festival’s official selections reveals a startling variety of work. Some videos are remarkable simply because the cat owner happened to be filming at just the right time, capturing a housecat getting stuck in a ceramic pot, a kitten’s sneeze, or a blind cat adorably reacting to the hairdryer, attacking the wind. Others have been wittily edited, or dubbed over to create a narrative, as in Dansons la capucine by YouTube user “faireset,” in which the French-speaking narrator humorously scripts an interaction between two housecats. There are the classics: Grumpy Cat makes an appearance, for example. Others are short films in their own right, expertly shot, lit, and directed.

Stulen holds a graduate degree in painting and contemporary art, and has worked in the museum world for the past 10 years. He currently serves as the director of MNartists.org, an online resource for Minnesota artists and the product of the Walker’s New Media Initiative. In curating cat videos, he said, he applied the same criteria as he would any other artistic medium or genre.

“One way to kind of describe the type of work that I do,” he said, “is I like curating things where all of the people in the high-culture side and the low-culture side are uncomfortable. I like that middle place. It’s actually where most people operate, and I think it’s where those tensions occur. Putting cat videos into a museum is an obvious example of this. It’s one of those things where, when we initially did it, nobody really took it very seriously, Now, it kind of took off and had a bit more traction to it. Now they’ve started getting a lot more inquiries from a lot of other museums.”

Stulen has often accompanied the festival on tour and given talks about community engagement and cultural institutions. On the West Coast leg of the tour, however, Henri creator Braden will play host to the event. 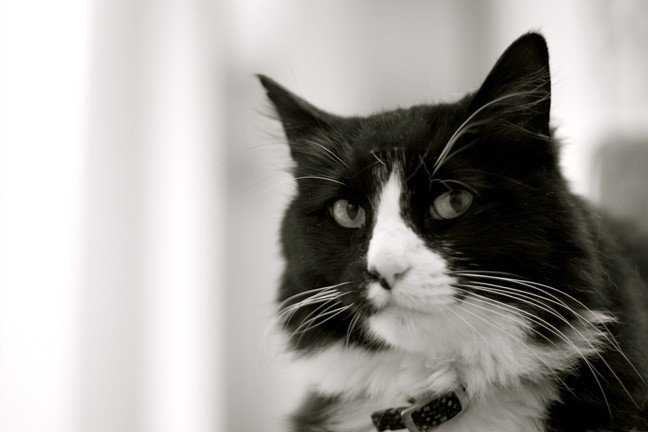 Braden’s films are certainly on the higher end of the cultural spectrum. Shot in black and white, his feline star Henri muses about existential problems of domesticated life.

“I am free to go … and yet I remain,” Henri says, gazing morosely out the window as sorrowful piano music plays. Looking in the bathroom mirror, Henri muses, “We cannot escape ourselves.”

Braden narrates in French, a language he says he doesn’t speak, though he receives pronunciation and translation help from his French-speaking mother. Some critics have lambasted Henri’s language skills, which only seems to amuse Braden.

“There are all these horrible YouTube comments about how bad my French is: ‘This cat doesn’t speak French!’ Well, guess what? He doesn’t speak English, either!” laughs Braden. “What’s funny is that a lot of French people, they realize that I don’t speak French and that I’m just faking through it, and they don’t care. But the Francophiles, like the Americans that speak French, they feel like they have to be offended on behalf of the French. They’re the ones who are more antagonistic about the comments. Again, all it does is make me laugh. I don’t speak French, so it’s not offensive.”

Braden created the character of Henri while studying at Seattle Film Institute.

“In film school we were watching a lot of French New Wave films,” he explained. “ … It’s this very classic sort of European, black and white, you know, cigarettes, philosophical ideas kind of thing. We’d been watching a lot of those. Even though they’re important films and intellectual, if you watch them back to back to back, they get to seem really pretentious.

“We had an assignment to do that was just supposed to be a profile of someone. Really, that was the whole assignment. …  I had procrastinated, and I had no time to get a person. But I had a cat, and I had a camera, and I was house-sitting for Henri at the time. And I thought, maybe if I do a profile of a housecat, and I do it in this sort of existentialist, New Wave style, no one will actually notice that I didn’t actually follow the assignment.”

Braden received an “A” on the project, and Henri got his own Facebook page. After his follow-up film won the Golden Kitty, Henri became an Internet celebrity.

(“That I have received this golden, smiling idol for a film documenting my metaphysical torment speaks volumes about the spiritual void of humanity,” Henri posted upon receiving the award. “Shiny and meaningless, life marches on.”)

“There is some unique content in the reel, but for the most part it’s stuff people are really familiar with,” Stulen said. “But what they haven’t done is, they haven’t watched it with hundreds of other people before. And I think this is the whole idea, you know, why I’ve been doing this. I think there’s really something different about content we experience online when you take it into a social setting. There’s something that people really respond to about watching this stuff together.”

This renewed appreciation for community seems, in fact, to be an inadvertent byproduct of the Internet in general. There was a time, for example, when people went to film screenings for the ostensible purpose of seeing films. But this reason does not hold up so well in an era of instant accessibility, and the Internet Cat Video Festival seems to epitomize this. The cat videos themselves quickly become secondary to the experience of watching a cat video—and the experience of watching other people watch a cat video.

Arts Editor Anna Weltner is in the crowd, ready to pounce. Send comments to at aweltner@newtimesslo.com.