Amid charges of falsified documents and incorrect maps, dozens of sturdy oaks bite the dust

A battle is underway in Atascadero between homeowners on Allemande Lane and city staff over the construction of a nearby fire road on the side of a precarious, steep, unstable hillside below their homes. The homeowners claim false and misleading reports led up to the roadâ€™s approval and that the city failed to give them notice of public hearings. 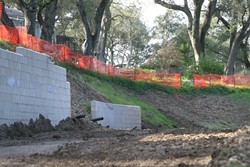 #Â â€œI have overwhelming anger at what happened,â€? says Atascadero City Council member George Luna. â€œI am very angry at what the staff has done. It has happened over and over again in the city. The character of the city has suffered.â€?

Â In August of 2003, Atascaderoâ€™s Community Development Director Warren Frace sent an environmental declaration to seven agencies for their review, including the California Department of Fish and Game, Regional Water Quality Control Board, and SLO County Air Pollution Control District. However, the location map provided with the report left out approximately a third of the project, the steepest portion.

Â In approving a six-home residential development near Portola Road, the city required the builder, Don Messer, to construct a fire road as an alternative escape route for existing residents of Encino Avenue. Due to grading and construction of the new fire road, homeowners on Allemande Lane have lost their secondary access.

Â They are angry and worried that their land will wash away, since their homes are directly above the unfinished road. Just ask Cindy Sasur and Kevin Ashley, whose home at 5575 Allemande Lane, sits atop the hill. â€œIf there is a fire, our way out has been replaced with a 10-foot drop,â€? Sasur says. â€œThe city has used a variety of deceptive tactics to get the project approved.â€?

Â When Sasur looks out her back window, there is now a jagged, naked piece of earth where lush woodlands used to be. She claims that many of her large oak trees will die due to the impact; her land has been graded, and a dangerous drop-off now replaces the sloping hill that used to lie behind her home.

Â On Nov. 25, 2003, during a city council meeting, Atascadero Fire Chief Kurt Stone showed movies of the disastrous 1991 Oakland fire and requested that the city require the fire road as part of the project. The council approved the development; out of five on the council, only Luna and Becky Pacas voted against allowing the project as proposed.

Â Cities are required by law to send announcements of upcoming public hearings to property owners who live within 300 feet of a proposed project.

Â However, some of the most impacted property owners claim the city failed to send them notices of upcoming council meetings. City officials retained undeliverable letters as proof of their attempt to notify Sasur and Ashley. The addresses on the envelopes have been redacted, though on one envelope the post office bar code was not redacted and shows the letter was mailed to Hoxeyville, Michigan. It is unclear whether the city or Messer provided the incorrect address.

Nevertheless, the Sasurs have never lived in Michigan, and for the past five years all of their property tax bills have arrived at their correct address.

Â After hearing about the proposed development, the Sasurâ€™s next-door neighbor, local minister Estevan Andrade, went to the city hall and examined the environmental declaration and map for the project. â€œI looked at the review to see if we were involved, because we never received a notice. I told Cindy we were not in the project area,â€? Andrade says. â€œWe were totally clueless about what was going on. You hear about the good old boys, itâ€™s for real.â€?

Â Cindy Sasur and Kevin Ashley have filed two lawsuits against the city and the builder. The first alleges that the city was required by the California Environmental Quality Act to conduct further review. The second suit claims that 20 feet of the fire road was deeded to the homeowners in the original Atascadero Development Syndicate/Oscar Willett trust. Numerous city officials, including the City Clerk and assistant to the city manager Marcia McClure Torgerson, and City Attorney Patrick Enright, have refused to discuss the environmental report and map due to this pending litigation.

Â In May 2005, Sasur noticed Messer cutting a number of trees that were not tagged to be removed. She also had discovered that the arboristâ€™s report incorrectly stated the size and number of trees that had been tagged. On May 24, Sasur provided the Atascadero Community Development Department with a list of discrepancies and asked that the city halt construction while it reviewed the project.

Â But Messer continued his work from dawn to dusk for the next three days, removing trees and rough-cutting the road while Sasur was e-mailing the city asking why the project hadnâ€™t been stopped.
Â  â€œIt is my understanding that the project was shut down,â€? said City Manager Wade McKinney in an e-mail to Sasur on May 27. â€œI will follow up.â€?

Â In response to Sasurâ€™s allegations, the city launched an investigation of arboristâ€™s report provided by Messer, and revised the arboristâ€™s findings. The revised report shows the original tree study that the council reviewed before voting on the project, according to court documents, â€œwas false and grossly understated the number of trees that would be impacted or removed.â€? The report shows that 30 extra trees (including white oaks and blue oaks) were slated to be removed, 20 trees were already missing, 41 would likely die within five or six years due to the impact of the roadwork, and 14 trees were larger than reported.

Â â€œThe slope was originally steep, very unstable, and contained a large amount of shale,â€? says certified arborist Tim Oâ€™Keefe and the husband of a member of Atascaderoâ€™s planning commission, Joan Oâ€™Keefe. â€œI project that the slope and soil will eventually wash down the creek. The impact on the environment has been pretty drastic; 90 percent of the underbrush was removed. So that means the wildlife habitat has been drastically altered.â€?

Â However, Messer maintains the land is not in danger of erosion.
Â The situation has become a legal battleground â€” with the homeowners pitted against the city and Messer â€” over the restoration of the property, and the planting of replacement trees.
Â â€œItâ€™s like the Old West, except a six-gun has been replaced by a bull-dozer,â€? says Sasurâ€™s attorney Roy Ogden. âˆ†

Staff Writer Karen Velie can be contacted at kvelie@newtimesslo.com.