Co-owner of 13 Stars Media and Atascadero City Council candidate Nicholas Mattson is under fire for an opinion series he wrote for one of his papers, The Atascadero News, in July. 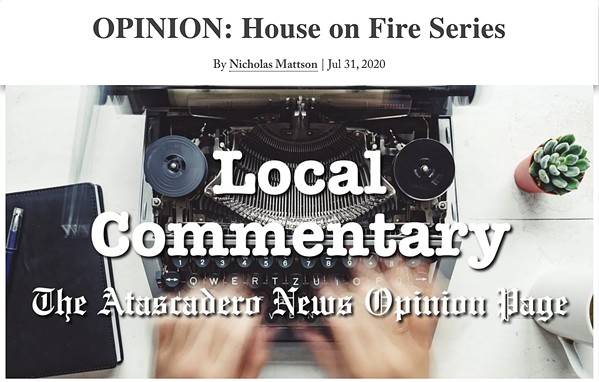 The four-part series, "House on Fire," details Mattson's view on the impacts of COVID-19 locally and nationally, local and state responses to the virus, and the start of Black Lives Matter protests in SLO County sparked by the death of George Floyd in Minneapolis.

Mark Tomes, a current columnist for the publication and former resident of San Luis Obispo County, said he and other individuals were troubled with Mattson's misinformation in regards to relating recent protests to the rising coronavirus-positive cases.

In the first installment of the series published on July 9, Mattson states, "Multiple weeks of reopening the economy resulted in no observable rise in COVID-19 cases, while 10 days after protests where thousands gathered set off a chain reaction that led to record numbers around the country and in our own SLO County."

The connection is referenced several times in the opinion piece and again in the second installment of the series.

SLO County Health Officials have never cited protests as the reason for increased cases. Rather, the county's transmission data shows that the highest percentage of cases have come from person-to-person spread.

Tomes said he understands the column is meant for opinions, but he can't "agree to disagree until both parties have their facts straight."

Mattson told New Times that if there are factual inaccuracies, he would rather receive them in writing and address them, if necessary.

The second issue Tomes and others have is the message Mattson ended his series with, "WWG1WGA"—an acronym related to the QAnon far-right conspiracy theory representing the phrase, "Where we go one we go all."

According to an article in The New York Times, the theory began online in 2017 when a 4chan message board user claimed to have top-secret information from the Trump administration and began posting online.

QAnon alleges that the world is run by Satan-worshipping pedophiles who are plotting against current President Donald Trump while operating a global child sex-trafficking ring. According to the theory, Trump was recruited to be president to end the criminal conspiracy and end its control of politics and the media.

Mattson dispels any correlation between the phrase and the conspiracy theory, saying he "doesn't subscribe to them." He said the phrase is related to President John F. Kennedy's message of unity during his presidency.

"It's also been highly referenced to a movement toward being honest about a few other things that are going on, and one of the things that matter to me is the idea that we've been silent for too long about particular subjects, and one of those is human trafficking," he said.

At the moment, Mattson said he's shifting his focus from the publications to campaigning. He said he will be stepping away from The Atascadero News publication, and his wife and co-owner, Hayley Mattson, will be continuing as editor and will manage the publication so Mattson can avoid any conflicts of interest.