Atascadero gets a college

When Shirley Perry was a young adult, her father wouldn't let her go to college. He firmly believed that she needed to be at home raising her two boys.

"He told her she 'didn't need to be going off to school' but it was something she always wanted to do," said Alyssa Perry, president of the Atascadero San Joaquin Valley College campus. 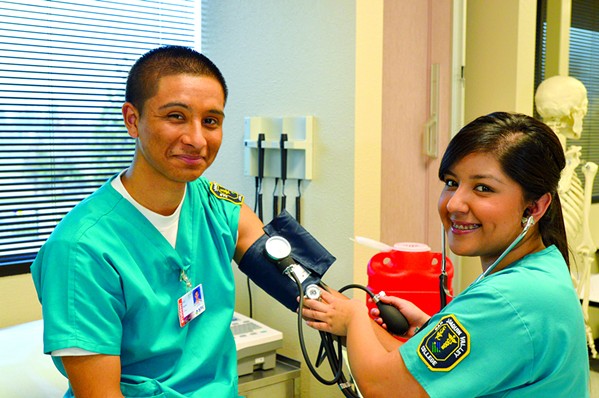 But her father's ideals didn't stop Shirley from studying for 18 months between working and raising her family, to become a medical assistant. Perry said Shirley took the test and was the first woman to pass the exam in the state of California.

People were inspired by Shirley's determination and asked her for help, and those inquiries were enough motivation for Shirley to decide to open up a school of her own.

"Her husband, Robert, quit his job and they went all-in. They even put their house up for collateral and started their first school with a very small room and just a few students," Perry said.

The first campus opened up in Visalia, California, with a mission to offer courses in accelerated career training. As the institution grew, the staff on board remained mostly within the family. Perry said that Shirley's two sons started out in the family business as janitors.

The private college has grown to 15 campuses throughout the state from Modesto to Temecula and now has a new location in Atascadero. Although the institution has grown, it has stayed within the family. As Shirley and Robert have stepped down, their son Michael Perry has taken the reins. His daughter is now the president of the Atascadero campus.

Keeping with the family theme, she too, has worked for the college for most of her life, from being in commercials as an infant to a full-time position post college graduation.

The permanent campus, which is still under construction, is set to be on El Camino Real. But Perry said enrollment is in full swing, and classes will be held on the temporary campus at 6907 El Camino Real.

Every campus is unique in its course offerings, and Perry said that San Joaquin College looked at what it could bring to the Central Coast that would be valuable to the community.

"We've gotten a lot of requests for the nursing program because the one at Cuesta gets so impacted. What it comes down to is it's the opportunities or clinical sites that are available," she said.

In order to participate in a nursing program, students must attend clinicals—the experience of working in a hospital, clinic, or nursing home. Perry said there are only so many doctor's offices or hospitals in the area for students.

However, she said no program is out of the question for the campus in the future. For now, though, the campus is starting out with the three programs: medical assistant, medical office, and business administration.

Students who are interested in attending the college will notice the eight- to nine-month program lengths. Currently, the Atascadero campus is enrolling for the morning session of the courses, so students are in class from 7:15 a.m. to noon, Monday through Thursday.

Classes will begin on Sept. 24. The institution operates year round, so new classes begin every five weeks. There isn't a summer or winter break in order to give students the opportunity to enroll in classes when the time is right for them.

"It's really flexible; we know that our students often have commitments outside of school and lives outside of campus," Perry said. "So it really allows for them to go to school full-time and also hold their family life and their jobs together." Δ