The People and Places exhibit will be on display through Nov. 30 at the Atascadero Library, 6555 Capistrano Ave. For more information, visit slolibrary.org.

Between the stacks of books at Atascadero Library, the exhibit of People and Places: A Photographic Journey Through Time lines the walls.

"The topic is a very difficult subject," Cheryl Strahl, an Atascadero resident and retired software engineer, told New Times. She is one of the eight local photographers featured in the exhibit.

Strahl said that the open-ended and interpretive nature of the exhibit made it challenging to choose which pieces to present, but the theme ultimately allowed for "a good representation of different ideas."

For Strahl, the topic moved her to submit a photo that she finds timeless.

"It's a picture of a goat shepherd," she said of the stunning shot from the Balkans. "We were just driving along a road in this small village in the Albanian Alps, and we saw this man herding. We pulled over and we asked if we could photograph him. I snapped this image of him just before he started posing for us. I put it in the show because that picture could have been taken 200 years ago." 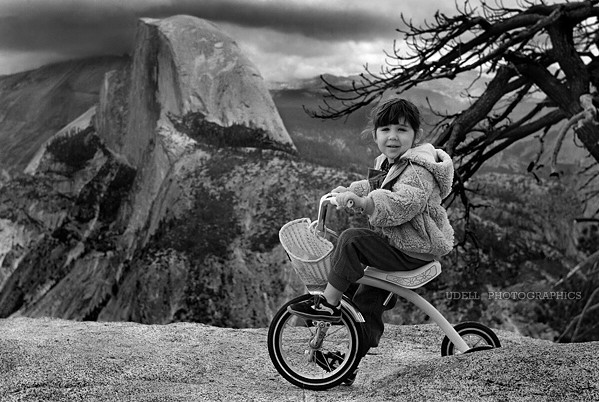 For Steve Udell, a North County local and featured photographer, the theme inspired him to showcase a photo of a special person in a special place. He settled on submitting a black-and-white film photograph that he shot of his daughter at Glacier Point in 1984. 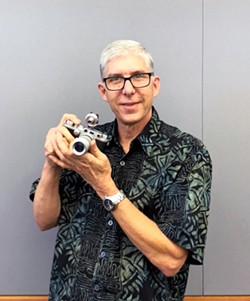 "That print that you see out there is the first print since 1984," Udell said of his piece. "The negative was so poorly underdeveloped, that it wasn't until 25 years later, with modern technology, that I rescued this negative."

He said that the story behind his photograph fits with the theme.

"I thought it would be fun to have the past, but with present technology presenting it," he explained.

Udell comes from an era of film photographers who strived to develop their photos without blemishes—a feat that is not so easy with this unpredictable medium.

"In the darkroom, the goal was to not have scratches, pinholes, spots. Those were all flaws," he said.

With a recent resurgence in film photography, it's become increasingly popular to make photos appear "vintage" by intentionally damaging film.

"Now I see people putting the flaws in, like they're cool," Udell said of this contemporary phenomenon. "To me they were never cool; they were a deal breaker."

But for Larry Hammons, another contributor to People and Places, adding flaws to digital photos is his signature process.

"I've made them look like old photographs, something you might find at the bottom of a drawer at your grandma's house, taken with an old Kodak and then wrinkled and crinkled," Hammons said of his work. "You get the idea that this picture could have been taken 100 years ago."

One of Hammons' photographs was captured digitally at Colony Days, a historic re-enactment parade held in Atascadero. Then Hammons applied his special process to the photo to achieve its archaic look.

"I warble them. I add textures to them. I don't try to change the picture so much as enhance the picture," he said.

Hammons said he hopes his photos will remind the viewer of a simpler time.

"The theme is a photographic journey through time. With what I have provided, I hope it reminds some of the older people of how things might have been when they were children. ... People didn't lock their doors like they do now," he said.

Laura Dienzo, a fourth photographer in the exhibit, also uses distinctive post-capture methods. One of her photos features a crumbling barn against a lush green backdrop.

"I like to set myself apart," Dienzo said. "So my print is on metal, and it's mounted on a piece of barn wood."

The barn, which once stood behind Costco, has since been demolished, fitting for the journey through time that the exhibit is striving for.

Each photographer brought widely varied photographic processes, as well as distinct approaches, to the exhibit's theme. Yet the works displayed at the Atascadero Library speak to one another in a cohesive way, with each photo evincing those moments in time that only a camera and a good eye can capture.

As Udell said: "It's a fascinating thing to be able to preserve a given moment of a given second in life." Δ