Ephraim Scott Sommers' book of poetry, Someone You Love Is Still Alive, is available for purchase at jacarpress.com/someone-you-love-is-still-alive.

Having grown up in Atascadero, Ephraim Scott Sommers peppered his 2019 book of poetry with Central Coast references and stories from his upbringing. But the book, titled Someone You Love Is Still Alive, also touches on the hard truths that people are facing across America, resulting in a work that feels at once localized and universally resonant. The book received award recognition earlier this year, winning the 2019 Full Length Manuscript Prize from Jacar Press. 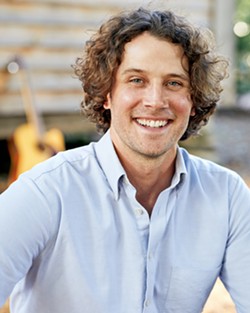 San Luis Obispo County residents will recognize landmarks in poems such as "The Impossible Kiss," set at the Sunken Gardens in Atascadero. The speaker in the couplet-structured poem—which is also the first piece in Sommers' book—calls out to their "Lover," reminding us immediately of the book's title.

"The love story itself is the jumping-off point for the whole book," Sommers told New Times. "It's the lens through which to view all those other difficult tragedies or wrestle with all those tragedies."

In other words, it is Sommers' very personal and unique experiences, many of which are set on the Central Coast, that are interwoven throughout Someone You Love Is Still Alive. But these snapshots are merely tools that Sommers uses to ground his more universal ponderings in a tangible, relatable reality.

While the beginning of "The Impossible Kiss" is rooted in observation and description at the Sunken Gardens—"In the dry fountain at the center/ of the Sunken Gardens, on one foot,/ a woman in a coat of living pigeons/ holds her breath"—as the lines continue readers find themselves swept away into the poem's ultimate ubiquity. This specific moment between the speaker and the Lover in fact is happening everywhere, as revealed by the last lines: "everywhere, people say,/ Look! The world's wings/ are coming apart."

Other poems dive even deeper into the issues happening "everywhere." Gun violence in particular is a strong theme that Sommers persistently explores. Poems like "Working Graveyards In Orlando After The Pulse Shooting," for example, cover events that virtually anyone in America would be familiar with. Yet, the poem remains deeply personal, as the speaker weaves in truths about himself: "Orlando is/ simply because it was,/ the same way I have been thirty-five."

Other poems like "My Father Sings A Gun Song in 1994" similarly ground our nation's struggles with gun violence in something more personal. In this case, the speaker recalls a chilling story that his father told him about a man who teaches his wife how to use a gun while he is gone in the military, in an effort to protect her. When he returns home, she shoots him thinking he is an intruder. The specificity of details and images in the poem makes the reader feel like we are there: The father has "a voice like ninety-nine dump truck engines/ at idle, like a leather fedora,/ like a tie-dyed Josey Wales t-shirt," and the wife's face is "the color of corvettes/ and cherry margaritas." But the message that Sommers uncovers is applicable to the struggles that everyday people face across the nation.

The title of the book is meant to serve as a possible way to get through the "news of terrible tragedies," Sommers said.

"I see the title of the book as a mantra that I'm repeating to myself daily," he said. "I want to remind myself of that thing, and lean into the love of an individual harder. ... It's an action that we can take immediately that makes the world better: the deep love of another person."

Sommers emphasized that the book ultimately reflects his own interpretations. Though the issues he grapples with extend far outside SLO County, the core of the book comes back to his lived experiences.

"I'm simply trying to hold up a mirror of what I've seen and witnessed in regards to those tragedies and how they've affected me personally," he said.

Though Sommers today finds himself away from the Central Coast—he teaches English at Winthrop University in Rock Hill, South Carolina, and previously taught at both Cal Poly and Cuesta College—he said that his work always reflects his upbringing to some extent.

"I really feel like I take a piece of San Luis Obispo County with me everywhere," he said. Δ