Atascadero, SLO County on the fence about community choice energy

Following a presentation by MBCP Communications Director J.R. Killigrew on June 25, the Atascadero City Council opted not to put a decision to join the community choice energy (CCE) agency on a future agenda. But the City Council agreed to revisit that question at its July 9 meeting. 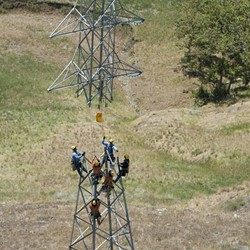 Mayor Heather Moreno and Councilmembers Roberta Fonzi and Heather Newsom said they wanted to coordinate with SLO County, which is also weighing the merits of MBCP, before taking any steps forward.

The county is currently seeking a third-party analysis of MBCP and its financials before moving forward with a board meeting, County Administrative Officer Wade Horton told New Times. The county Board of Supervisors voted to end a more localized CCE effort a few years ago.

"I think it'd be helpful to talk to the county before we put it on the agenda," Atascadero Councilmember Fonzi said on June 25. "I'd rather wait."

Both county and Atascadero elected officials have expressed skepticism about MBCP, which is one of 12 CCEs operating in PG&E territory in California. State law allows local governments to form CCEs, buying and selling often cleaner power, while incumbent utilities like PG&E continue maintaining the power lines and infrastructure.

MBCP claims SLO County and its cities could save millions of dollars on electricity bills if they were to enroll.

Mayor Moreno said she was concerned about how MBCP's economic model would weather California's push toward more renewable energy production and storage over time.

"The cost to do that is astronomical," she said. "I think it's more affordable now than it will be in the future."

While Atascadero and the county wait on more information, they risk missing an August deadline that's required in order to become MBCP members in 2021. That was the concern of Councilmembers Charles Bourbeau and Susan Funk.

"I think for us to dismiss it and not put it on the agenda anytime in the near future really would make us the odd one out as the only city in the county to not consider this," Bourbeau said.

SLO County's six other cities have all already voted to join MBCP. SLO and Morro Bay's residents and businesses will become customers in 2020, since they finalized their decisions in 2018. Paso Robles, Pismo Beach, Grover Beach, and Arroyo Grande will enroll in 2021.