Bob Kelley, an Atascadero planning commissioner and local Realtor, and Robert "Grigger" Jones, a local attorney, are being talked about and not just because they're both City Council candidates. 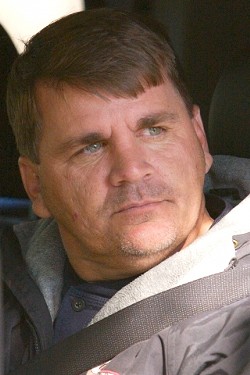 # Allegations have surfaced recently in the form of a stack of official documents on file with the city.

The city staff members making the accusations say that Kelley and Jones asked them to waive regulations and allow a developer to pave over open space on his development behind the backs of the Planning Commission, according to a project plan file that includes 38 pages of e-mails, amendments, memos, project reviews, and staff reports.

Members of the Atascadero Planning Commission said that Kelly Gearhart constructed a driveway and added parking spaces to a development of his in violation of the project's conditions of approval. Several city staff members said that, earlier this summer, while performing a review of Gearhart's Tecorida Condos, they discovered an unapproved elimination of open space in favor of asphalt.

In response, Joe Chouinard of the Public Works Department ordered Gearhart to tear out the driveway and transform the area back to a park-like setting, according to the project review.

In an e-mail from Gearhart Development to Atascadero's Department of Community Development, dated Aug. 24, the developer requested that city staff sign off on the changes, as "the access driveway has already been installed per city standards at this location."

"It's lies. It's all lies," Gearhart said in response to allegations that Jones and Kelley had a behind-the-scenes meeting to pressure staff in the developer's favor. He said he would elaborate, but has since been unavailable for comment.

Kelley didn't respond to requests for comments or responses to the allegations.

"I found Planning Commissioner Bob Kelley and Attorney Grigger Jones both of which are documented City Council candidates in attendance at the [Aug. 26] meeting, both of which pressured staff to not only support Gearhart's request, but to waive the planning commission authority over this change," McHarris wrote in an e-mail to Frace on Aug. 29. "Gearhart said 'it was his property and he could build whatever he wants without any permission from anyone.'

"The point of this e-mail is to remind you (and maybe myself) that City staff does favor Mr. Gearhart and routinely changes policy, skirts the code, allows building without permit, and provides service and preferential treatment that no other developers receive ... This is completely opposite of what the City Council has requested of staff," McHarris wrote in that same e-mail. "My position remains firm that staff should present a staff report not influenced by the events of today's meeting."

Jones did not respond to numerous phone requests for an interview, but provided a statement via e-mail on Oct. 11.

"I read the e-mail created by Steve McHarris Sr. Planner for the

# City of Atascadero, who made a conclusionary statement about influencing City Staff," Jones wrote. "That is the only mention of my name in his e-mail. I was invited (as a City Council candidate) to observe a planning issue by a developer on his site. I did so. Present was Warren Frace, community development director, Steve Kahn, public works director, and Steve McHarris. I observed a vocal dispute between the developer and Mr. McHarris. I further observed Warren Frace state that the developer's suggestion as to a change in access to the site would be recommended to the Planning Commission at its next meeting. That is all that I observed taking place. And all the parties left after a few minutes."

The project file contains allegations that Kelley insisted Kahn, Frace, and McHarris approve Gearhart's request and that, in light of McHarris' refusal to permit the driveway to remain, Gearhart "berated" the city employee.

An Aug. 30 document shows that Gearhart responded to the plan check order to tear out the driveway with an amendment that reads: "Access issue addressed with Steve McHarris, Warren Frace, and Steve Kahn. Driveway to remain."

Upon discovery of the amendment and the implication that he had approved the driveway, McHarris attached a memo of his own to Gearhart's amendment: "This memo is being placed in the file record to remove Steve McHarris from any reference of project approval regarding the August 26 meeting, in which Planning Commissioner Bob Kelley and Attorney Grigger Jones attended with Kelley Gearhart present and on his behalf. To date, my position remains firm that staff should present a staff report not influenced by the events of this meeting or the attached Gearhart memo."

On Sept. 19, Gearhart asked the Planning Commission to allow the driveway to remain. He was denied in a 3-to-2 vote.

"It makes a mockery of the planning process when you go through the processes and meet city standards and then the developer ignores the plans," said Planning Commissioner Joan O'Keefe, who voted against the approval. "Gearhart was allowed higher density in exchange for providing a public benefit. The public benefit on Gearhart's property was the open space. He agreed to it at the time. It feels to me like he is thumbing his nose at the planning process."

Kelley voted in favor of the approval, as did Planning Commissioner Greg Porter, who was unavailable for comment.

Gearhart then appealed to the City Council, but has yet to be heard.