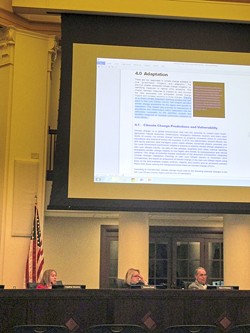 The agenda item before the Atascadero City Council included “climate” and “action” in the title, but related public comment brought no mention of Agenda 21 or ICLEI. Rather, the four people who spoke on the city’s Draft Climate Action Plan at the Jan. 14 meeting had fond words for the city and its goal for carbon reductions.

Then the council members had their turn. Heather Moreno and Roberta Fonzi brought out the red pens in an editing session that removed hundreds of words—including entire paragraphs—that made any mention of human involvement in climate change, the effects it has on the community, or the potential benefits enjoyed by the city for the plan’s adoption.

Moreno led the charge, flanked by Fonzi, in saying that the council and staff had been open to creating a plan—as required by the state—before it got politicized.

“In the plan before us, there’s a lot of filler in here, there’s a lot of politically charged statements that don’t really add anything to the plan,” Moreno said. “They are really just opinion, and they aren’t necessary.”

The plan, known as CAP, outlines a strategy for the city to meet the state’s requirements under AB 32, a bill requiring cities to reduce greenhouse gas emissions to 1990 levels by 2020. Atascadero’s draft CAP identified the potential to reduce 28,873 metric tons of emissions, though a 18,737-metric-ton drop would satisfy the requirements. A consultant used a “tool box” to calculate various actions leading to reductions, such as increasing energy efficiency in residential and city buidlings and reducing vehicle trips in the city.

The actual plan for reductions wasn’t at issue—just certain language in the plan.

Moreno challenged words in a background section that discussed rising temperatures, contesting that “there has been science saying that it hasn’t warmed.”

Council Member Bob Kelley questioned how much of any warming is caused by human activity, citing such other contributors as volcanoes.

“I don’t know how much of this green gas stuff is a cause of it,” Kelley said. “I think it’s Mother Nature that causes it, too.”

The editing went on for more than two hours, absent a vote of approval. The council will revisit the plan and its proposed changes on Jan. 28, after Mayor Tom O’Malley, who led the council in discussing the CAP piece by piece, suggested they give the public time to review the changes.

After the discussion, O’Malley asked the public if they had more to add—something the mayor may do when the council addresses large items. A sole audience member spoke: Ray Weymann, a retired astronomer.