Atascadero transportation is at a crossroads

Highway 41 work means progress, but some locals aren't happy with the price

Listen closely to the diner-and-coffee-shop talk in Atascadero, and you'll still hear some longtime residents express fond regrets about the way the state plotted Highway 101 directly through, rather than neatly around this town of 22,000, in the 1950s. 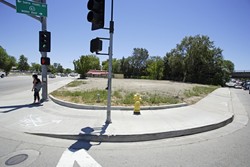 # Now, as Caltrans officials consider bids to rebuild a 10-years-in-the-planning interchange of highways 41 and 101 smack in the middle of town, many residents are keeping a close eye on the details, and drawing attention to the sort of costs that come with progress.

Highway 41-East is a lonely, winding, two-lane road known to locals as a dusty, hot, and desolate way to reach Bakersfield, with few services or comfortable stops. Former Atascadero city councilwoman Marge Mackey, a resident of the North County town for 45 years, recently encountered an out-of-towner who'd just made the trip.

"Well, I bet you won't be going back that way," was Mackey's response.

Quick facts on the project, expected to start up construction in September: Funds for the work, at about $17 million, were wrestled from state transportation coffers by Caltrans and SLOCOG (the San Luis Obispo Council of Governments) over 10 years. SLOCOG executive director Ron De Carli said that almost $7 million of those funds are for buying up various businesses and land at the corner. Gone are two gas stations, a chicken restaurant, a Thai food restaurant, and more. Highway 101 will remain open during most of the work, but Highway 41-West, where it goes under the overpass heading toward Morro Bay, will be narrowed to one lane in each direction during construction. The 101 bridge, the on-ramps and off-ramps, and Highway 41 for that small length will either be relocated or removed, widened, or rebuilt from scratch. There will also be work on a bike path, a "median bridge," and interchange area landscaping.

"It is the center of town," De Carli said. "And it's two state highways. But it's also a downtown livability project, because you're bringing in traffic to a downtown."

Regional transportation planners agree that the state of California, which sees literally millions of cars on these routes every week, needs every connection or artery linking the main coastal route (Highway 101) with the Central Valley to be clear, open, and in good shape. The Highway 41 route, although old, connects to the far more popular Highway 46-East route some 40 miles inland. California has only four or five of these routes to the Valley, between Ventura and Salinas, which allow access for many tons of produce and commerce moving to the public.

But from Mackey's point of view, funneling traffic through the middle of Atascadero shows an out-of-towner's attitude toward the region's needs.

"I think it's a mess," Mackey said, "the way they re-aligned it. If you come in from Morro Road, and you want to get in line [at the intersection], it's difficult to do it. It's just a mess. And I'm really just afraid it's going to be worse."

Mackey, founder and past president of the Atascadero Historical Society and a former city council member, said she remembers that there was only one traffic signal for the entire stretch of El Camino Real at her high school reunion in 1969.

Her main concern now for the work being done at the intersection is the removal of as many as 100 shade trees that have shielded the street from the heat of the sun for years, including one very large sycamore that she voted against removing for another development 20 years ago. She says that this particular tree, with its thick branches and deep, green leaves, was probably among some of the original sycamore trees planted in the area by Atascadero's founder, E.G. Lewis, an Old West community-builder.

"It really is a lovely tree," Mackey said. "I'm always trying to save a tree. At this point I don't think there are any oak trees involved. No old oak trees. But still, they're nice trees."

Another Atascadero Historical Society stalwart, Atascadero resident Lon Allan, agrees about the trees. Like a lot of small California cities, Atascadero advertises itself as a "Tree City-USA" town, with signs at either end of the city to let visitors know just how dear the old oaks and other trees are here, he said.

"We have to continue to earn that," he added.

Allan, who has publicly supported the re-alignment of the routes, said that debate in Atascadero about tree removal can be a hot topic. In the past, he said, some downtown business owners have backed tree removal along Highway 101, just to make their shops more visible.

"But it's long overdue," Allan said of the project. "It's been a mess there [at the intersection] for a long time. It's important for Atascadero to improve its looks."

For now, at this crossroad in the middle of town, the interchange and surrounding commerce seem like a work-in-progress to anyone passing through. On one corner, a popular gas station and convenience store built only a few years ago was demolished, leaving only a dirt lot. Across the way, an older gas station is also going out, with fences blocking the view of the empty shell of the building. Nearby is a 20-year-old Mid-State Bank building, with a drive-through lane feeding traffic out into the street only a few yards from the intersection.

The other corners feature a Citibank building that old-timers remember as a funeral home, and a large shopping plaza and parking lots across from that. Going the other way, toward Morro Bay on Morro Road (the Highway 41 route West), are the on-and-off ramps to Highway 101, and several residential streets that will be closed during construction. Additionally, near the intersection, the Century Cinemas shopping mall complex was reduced to rubble about a year ago, for even more downtown Atascadero construction.

Like Dr. Seuss' Lorax character, Mackey said she's continuing to negotiate with Caltrans and SLOCOG about protecting the trees.

"Where the northbound on-ramp is now, they're talking about taking down those trees, too," Mackey said. "Why? The last thing they told me was, 'Well, we won't take any more than we have to.'"

Julian Phillips is a freelance writer. Contact him through the editor at rmiller@newtimesslo.com.